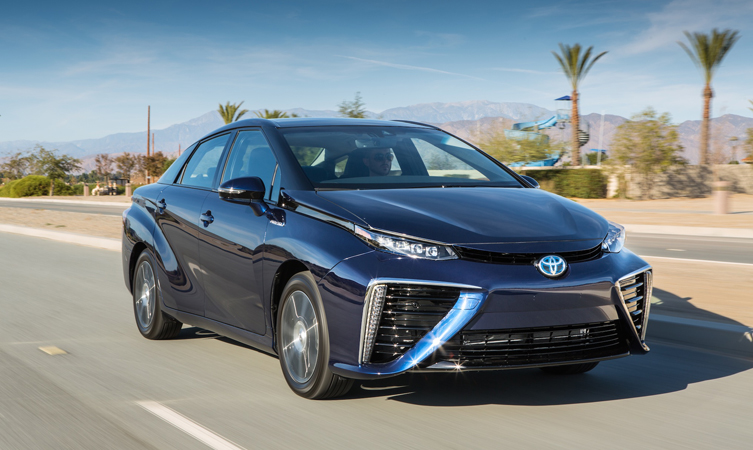 The TFCS is more energy efficient than internal combustion engines, gives better environmental performance with no CO2 or other pollutants when the car is driven, and has the same convenience and autonomy as petrol-powered vehicles, with a refuelling time of around three minutes.

Toyota Fuel Cell Stack
The new Toyota FC stack has a maximum power output of 153bhp (114kW). The efficiency of its electricity generation has been improved by using 3D fine mesh flow channels – a world first – which ensure uniform generation on the cell surfaces. This has helped give the FC stack compact dimensions, a high level of performance and a world-leading power output density of 3.1kW/L, a figure 2.2 times greater than that achieved in Toyota’s hydrogen fuelled concept car, the FCHV-adv.

The amount of water on the fuel cell electrolyte membranes has a substantial influence on electricity generation efficiency. The amount of water is controlled using an internal circulation system to carry water produced in the electricity generation process. This makes the Toyota FC Stack a world-leading system that, unlike those used in all other previous Toyota fuel cell vehicles, doesn’t require a humidifier.

FC boost converter
A new, compact, high-efficiency, high-capacity converter has been developed to boost the power generated in the Toyota FS Stack to 650 volts. Increasing the voltage has made it possible to reduce the size of the electric motor and the number of fuel cells, leading to a smaller FC system that gives higher performance with reduced costs.

High-pressure hydrogen tanks
The fuel tanks have a three-layer structure made of carbon fibre-reinforced plastic and other materials, and they store hydrogen at very high pressure – 70MPa, or approximately 700bar. Compared to the tanks used on the previous Toyota FCHV-adv, storage has been increased by around 20 per cent, while weight and size have been reduced to a world-leading 5.7 weight-per cent5.