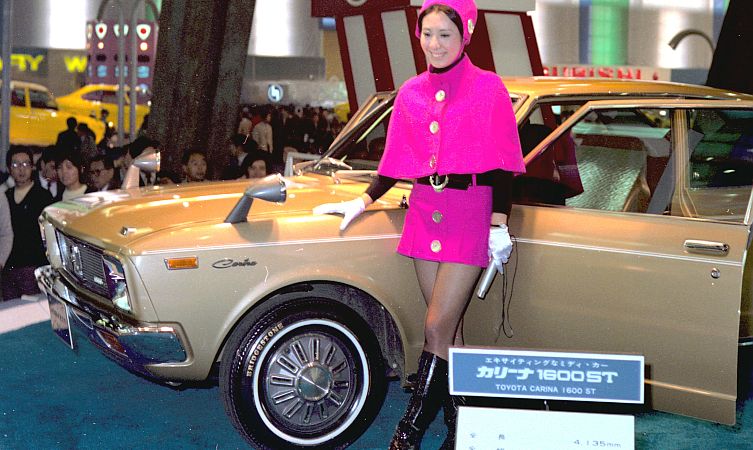 To build anticipation for that event, we have started publishing decade-sized posts that explain which important new models, ideas and concept vehicles Toyota revealed at each show. This second post examines the years from 1964 to 1973.

This year the show’s Japanese name changed from the All-Japan Motor Show to the Tokyo Motor Show, harmonising with what it had always been known as in English. Foreign visitors were now able to participate, and the emphasis of the show shifted from exhibition to business. Within the Toyota line-up, a production-ready version of the Publica Sports concept (first seen in 1962) made its debut, and visitors had the opportunity to name the car for its official launch the following year. It went on to be called the Toyota Sports 800.

The 1965 show took place immediately after the deregulation of passenger car import rules, thereby providing a suitable automotive celebration. Exhibitors sought to win customers by setting up sales desks at the venue. Among Toyota’s exhibits, most notable was the first prototype of what would go on to become the Toyota 2000GT. The potential of Japan’s first supercar garnered plenty of attention, from showgoers and the media alike.

In Japan, 1966 was known as year one of the private car age – a fact reflected in the show’s focus on boosting sales. The Toyota display was lit with T-shaped lighting panels, which offered a subliminally themed yet classy ambience. The line-up of cars, including the new first-generation Corolla and the second prototype version of the Toyota 2000GT, enhanced the image of Toyota as a world-class car-maker.

The primary exhibits this year came from car-makers presenting new 1,500cc class cars that emphasised their speed and durability for the dawning age of expressways. With speed came the potential for greater accidents, so a traffic safety booth was also arranged to offer safety tips for visitors. The first true production 2000GT was displayed, a special gold version presented by British model Twiggy.

The imminent deregulation of foreign capital investment in Japan led to the reorganisation of the domestic car industry, accelerating the desire expressed by many manufacturers to form company groups or alliances. Toyota, however, was keen to display its extensive range of products – 94 of which were brought to the show to illustrate the theme The World of Toyota. The family-friendly design of the stand also demonstrated Toyota’s technology development and thorough attention to safety.

This year’s show illustrated the rising power of the Japanese auto industry as it approached the 1970s and harnessed people’s imagination for what the future might hold. The number of concept vehicles visibly increased; Toyota was no exception, displaying a grand total of five futuristic EX-badged machines among a full line-up of vehicle of production models.

Foreign exhibits increased this year in anticipation of the deregulation of foreign capitals, while display stands focussing on safety and pollution-prevention were also included. Exhibits by Toyota included the newly announced Celica and Carina (lead image) models, as well as advanced cars such as the high-speed EX-7 (essentially a de-tuned Toyota 7 racecar), and the Commuter and Electronics Car for urban use.

A new public transit system called CVS (Computer-controlled Vehicle System) was featured at this year’s show, along with more futuristic cars. And as foreign capital investments in the Japanese auto industry were now deregulated, the show added to its international flavour. Toyota pointed to its future direction through three special exhibition zones.

Passenger cars returned to being the primary focus of the annual show. While foreign car-makers continued to contribute to the event’s international flavour, a new section dedicated to safety and pollution measures was set up by an auto industry coalition, attracting the attention of visitors. Toyota presented the results of its own research into urgent issues facing the auto industry, including pollution, safety, and urban traffic. The company also exhibited a multi-purpose recreational vehicle that pointed to future motorisation trends.

This year the show became more international and comprehensive than ever before, with exhibitors eagerly demonstrating their anti-pollution, pro-safety stance. Demonstrating its alliance with the public sector, Toyota exhibited the ESV, which conformed to the specifications of experimental safety vehicle set by the U.S. Department of Transportation. This was joined by the EV2 small electric vehicle developed as part of the large-scale project led by the Agency of Industrial Science and Technology.