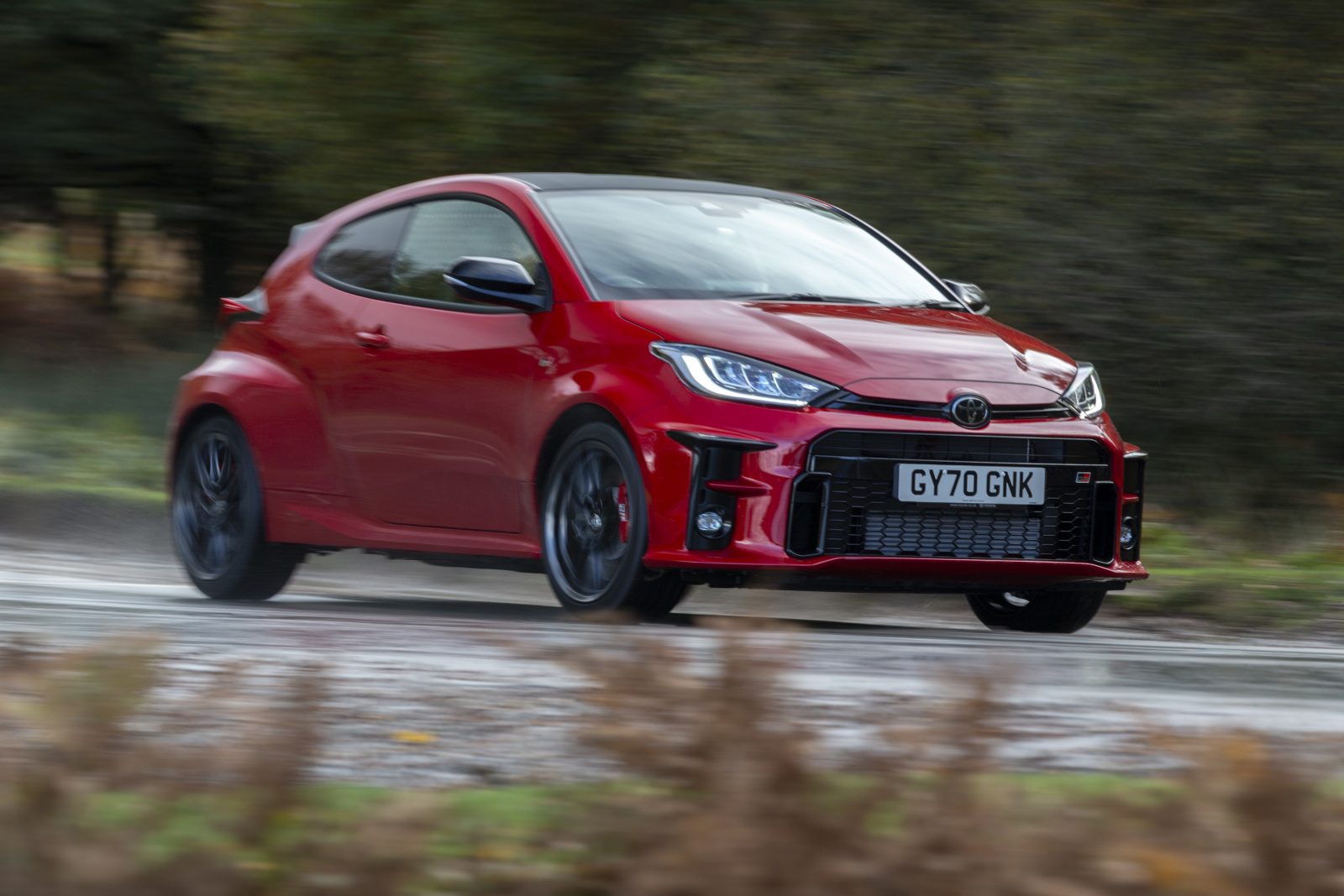 No sooner has its tyres touched UK roads than the new Toyota GR Yaris has won effusive praise. Reviews from motoring writers and video presenters have been nothing short of glowing, and the accolades continue coming as media outlets pitch our new hyper-hatch against rival machines – even exotic supercars – in group tests or pick standout vehicles in their respective annual awards.

Listed in chronological order, the following are summaries from the growing collection of GR Yaris awards. Similar to the post on Toyota’s collective awards, this model-specific list will be regularly updated as new honours are published.

Jeremy Clarkson confessed he didn’t have high hopes when he booked a drive in a new Toyota Yaris. What the Sunday Times reviewer and Grand Tour presenter admits he hadn’t bargained for was the kind of driving experience the rally-bred GR version of Toyota’s hatchback delivers.

Such was Clarkson’s delight, he has named it his Car of the Year in the News UK Motor Awards, saying “This is one of the most enjoyable and thrilling cars I’ve ever driven. This is a car that made me laugh out loud. I took it into my fields one morning and made a terrible mess, but I didn’t care because I was a complete riot.”

Apart from the grin-factor, Clarkson appreciated the performance of the three-cylinder 1.6-litre turbo engine and, in particular, the top-value pricing – starting at £30,020 and rising no higher than £33,520 for the version equipped with the Circuit Pack performance options.

GR Yaris was also honoured with the Hot Hatch of the Year title in the awards, judged by a panel of News UK’s motoring editors across its digital and print publications.

For GR Yaris, it is another award to add to its massive haul since launch last year. Announcing the awards today, Keith Adams, Editor of Parkers, one of the UK’s best-respected most popular sources for new and used car news and consumer advice, explained the qualities that set the Toyotas apart.

Commenting on GR Yaris being named Best Car for Thrill-seekers, he described it as “the absolute pinnacle of the hot hatch world,” adding: “The GR’s appeal isn’t based purely on speed – its feedback and feel are unrivalled and its ability to deliver old-school thrills are near-addictive.”

Northern Car of the Year

The Toyota GR Yaris has been voted Northern Car of the Year by the Northern Group of Motoring Writers (NGMW), the leading organisation for automotive journalists based in the north of England.

It is the first time in the awards’ 16-year history that a performance car has taken this accolade, topping the poll of the 36 members.

Andy Harris, Chairman of the NGMW and Motoring Editor of the Yorkshire Times, presented the traditional award, a suitably inscribed miner’s lamp, to James Clark, Toyota (GB) Senior PR Manager, at the annual northern test day this week, organised by the Society of Motor Manufacturers and Traders (SMMT).  “An award voted for by motoring journalists is always special so everyone at Toyota GB is thrilled,” said Clark.

In another first, Northern Group members were invited to choose the best vehicle in each of six categories with GR Yaris also named the Best Fun Car.

UK Car of the Year

In perhaps its most remarkable award-winning achievement yet, the GR Yaris has been named the 2021 UK Car of the Year (UK-COTY).

The result reveals the level of love for a car that sits well outside the mainstream: an out-and-out performance hatchback designed and engineered with a focus on the pure joy of driving.

Announcing the result, UK-COTY Director John Challen said: “The GR Yaris exudes the same sort of emotions found in the original breed of hot hatches, with a modern-day twist thanks to advances in automotive technology. The most fun I’ve had behind the wheel of a car for many, many years.”

CAR: Hot Hatch of the Year

“The Toyota’s punchy, characterful engine and fabulously exploitable all-wheel-drive system just add further weight to the argument that this is one of Japan’s truly great performance cars and the pre-eminent modern hot hatch.

“As amazing as the fact that the GR Yaris exists in the first place is just how fast and fabulous it is to drive. The combination of torque and low weight helps make the Toyota feel as weightless as the brittle orange leaves cartwheeling by on the breeze.”

Autocar declares GR Yaris to be “the first truly great car of the decade.” Judges explained how the car revealed “hidden depths of driver appeal, the likes of which haven’t been seen in a hot hatchback in a generation.” Among them, respected motoring writer Andrew Frankel declared the GR Yaris to be “the most dynamically capable car ever offered for sale at this kind of money.”

Click this link to watch the Autocar Best Driver’s Car Shootout video (from 2:15 for GR Yaris review and from 21:35 for the results).

In its third major award in the three weeks since its UK launch, Top Gear Magazine announced that GR Yaris was its Hot Hatch of the Year. Editor Jack Rix commented: “Rarely does a car come along with such fervent support from the Top Gear office, but everything about the GR seemed right.

“From its bespoke, inflated three-door shell, to its boosted three-cylinder engine and trick 4WD system, it’s a proper homologation special, real rally-tech for the road and built by a team at Gazoo Racing who were prepared to sweat the finer details to get it right. I can’t recall a car in the last five years that felt so right in our hands in the first 50 metres.”

EVO: Hot Hatch of the Year

Once again the GR Yaris managed to astound the motoring press with EVO giving it a glowing review and naming it their Hot Hatch of the Year. The EVO team reported: “(We have) been pleading with manufacturers to build a performance car like the GR Yaris for years. While some have claimed to have done so, only Toyota has delivered on its promise.

“It’s a driver’s car that engages you in every process, delivering a 3D experience in everything it does, backed up with a reassurance and consistency from every key control point.

“evo’s judges were won over by the GR Yaris’s infectious character, its playful nature and how every journey left them wearing a schoolboy grin. Throw in fresh from a WRC stage looks, a footprint that’s perfectly suited to British roads and a level of performance and a dynamic ability you’d expect from a car costing twice as much and it’s little wonder that the GR Yaris is evo’s hot hatch of the year.”

The new Toyota GR Yaris has won the hearts of the UK’s car fans who have voted in their thousands to make it Car of the Year in 2021 carwow Awards, after first claiming the Hot Hatch of the Year title in the awards. The GR Yaris was included in a shortlist of three models for online public voting for ‘Car of the Year’ which saw it win by a huge margin – around 5,000 votes clear of its closest rival.

Announcing the results, carwow’s car reviews expert Mat Watson said: “The Toyota GR Yaris is an absolute gem. Its fizzy 1.6-litre engine pumps out a whopping 261hp and its four-wheel-drive system gives it the traction of a rally car. It looks great too, and no other car has put a bigger grin on my face all year.”

What Car?: Hot Hatch of the Year

The GR Yaris secured its sixth ‘Hot Hatch’ award thanks to What Car? who awarded it the accolade in their 2021 awards. This award completed an impressive clean-sweep of honours, winning every major UK motoring media award for which it has been eligible since its launch just nine weeks ago.

Announcing the award, What Car? Editor Steve Huntingford said: “The GR Yaris is a truly special machine that feels tailor-made for tackling a British B-road. With its small proportions, clever four-wheel-drive system and firecracker of an engine, its performance is incredibly accessible. Yet it’s also fast enough to frighten thoroughbred sports cars. For pure driving thrills, hot hatches don’t get any better.”

The GR Yaris clinched another major award when it claimed the title of ‘Best Performance Car’ in the 2021 UK Car of the Year Awards. With the annual UK COTY awards being judged by a group of top motoring journalists from across the country, the award carries immense weight as only adds to the growing collection of awards the GR Yaris has won from various motoring magazines.

Auto Express awarded the GR Yaris the best ‘Performance Car of the Year’ at their 2021 Auto Express New Car Awards, adding to the exceptional haul of awards it has collected since hitting the road in late 2020. Steve Fowler explained: “This year’s Performance Car champ is a true giant-killer, fighting off machines with twice the power and prices three times as high. The GR Yaris was one of the most eagerly anticipated arrivals of the year and its blend of performance, poise and price mean it hasn’t disappointed. Few cars as fun to drive, yet this pocket rocket is easy to live with and relatively affordable to run.”

The success of the project is witnessed by universal media praise and a wealth of awards, including the latest accolade from Auto Express.