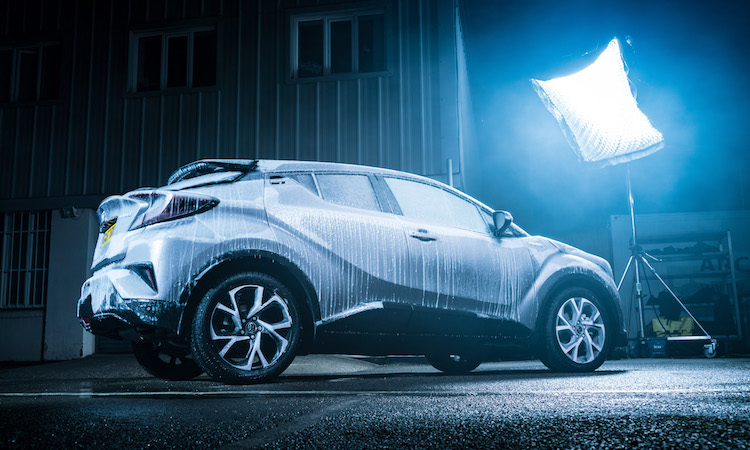 No, that isn’t candle wax dripping down the flanks of the car that you see pictured above – it’s layer upon layer of solid ice covering our frozen Toyota C-HR.

To illustrate how you can better prepare for cold weather driving with Toyota Winter Accessories; we placed our hybrid crossover into a giant deep freeze and captured its details as the ice began to melt in six short films.

How we froze the Toyota C-HR

The process of freezing began 24 hours before the first photo or frame of film was shot. Fresh from a valet, our Toyota C-HR was sprayed with deionised water – the kind you put into your car’s radiator – before it was placed inside a hermetically sealed refrigerated container.

Inside the container, the temperature was set to an arctic -20 degrees centigrade and every hour more water was sprayed onto the vehicle’s surface to thicken the ice and slow down its melting rate.

Reapplying the water was an important part of the freezing process because without it only a mild surface frost would collect on the car’s surface. The ice was as thick as four inches on parts of the car, completely covering extremities such as windscreen wipers and rendering badges invisible.

Frozen Toyota C-HR – how we filmed it

After 24 hours in the deep freeze, our Toyota C-HR resembled an igloo and was ready to be filmed. The first challenge was getting the car out of the container, owing to the fact that the thick ice on the windows made it impossible for a driver to see out. Adding to the challenge were the frozen-shut doors.

A brave Toyota technician went in through the boot and once in the driving seat, was helped by ‘spotters’ who guided the car out of the freezer and into position for the first shot.

All of the shots were set-up beforehand using a second, unfrozen Toyota C-HR in the same grade and colour to maximise the shooting time with the frozen car.

Despite spending 24 hours in a freezer that pumped out temperatures as cold as the South Pole, our Toyota C-HR started unassisted first time.

To add an air of authenticity, we filmed our Toyota C-HR outside, rather than in a studio.

Doing so presented a challenge. Metal is a great conductor of heat and so filming outside where the temperature cannot be regulated would cause our Toyota C-HR to melt quickly. The ‘steam’ you see rising from and enveloping the car is in fact condensation, forming as the humidity in the outside air condenses into larger droplets.

While the mercury has dipped considerably now; our Toyota C-HR was filmed over two nights in the middle of an exceptionally warm week in October. Consequently, our crew were left with as little as 45 minutes to film some of the 18 required sequences of the car in its frozen state. Fortunately, careful planning meant that this was more than enough time.

Where to buy the accessories featured in the films

Your local Toyota centre, which you can locate here, stocks the essential accessories required to make winter driving safer for you and your Toyota. You can also purchase from our official eBay store.

The full list of winter driving accessories featured in the frozen films is:

Be sure to stay safe this winter by taking your Toyota for a free Winter Health Check and free Hybrid Health Check.