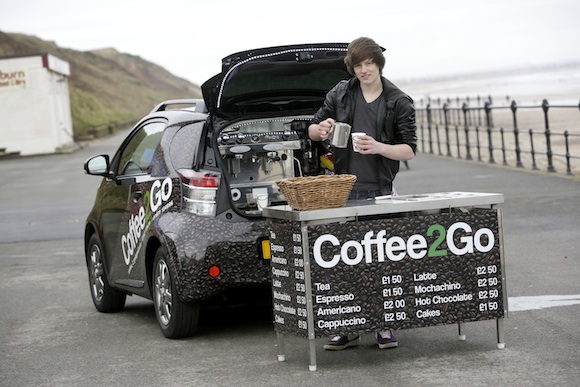 Budding entrepreneur Jason Bowes has been brewing up speciality coffees, teas and hot chocolates from the back of his Toyota iQ at events in the North East since he opened his business Coffee2Go late in 2012. It’s fair to say Jason’s Toyota iQ ownership story is radically different to the norm.

Jason, aged 20, bought the iQ2 last October, and with the help of his father Stewart immediately started work on turning it into his own mobile cafe.

“Dad gave me the idea of turning a small car into a coffee shop, because he owns a catering trailer business,” he says. “As soon as we saw the iQ, we knew it would be perfect. It’s small, eye-catching and it’s a real surprise when people see what we’ve got in the back.”

The conversion process took about a month, and involved building a frame in place of the rear seats to support the high-end Fracino Contempo coffee machine, and conceal the water and gas tanks needed to create a perfectly frothy cappuccino.

“Squeezing everything in was the hardest part of the build. It’s a small space and we had to fit in the 75-litre water tank, a gas tank for the steam, the framework and the coffee machine, so it there was a lot of trial and error when we were doing the prep work,” says Jason.

“But because we built it ourselves we could take our time and shape it so it sits perfectly. We’ve not drilled or welded anything and if we wanted to, we could remove everything and put the original seats back in.

“What’s great about the iQ is that even though it’s small, it easily carries everything I need. I carry a table and sign on the roof rails, and the coffee beans, cups, the chiller for the milk, the sugar, hot chocolate, cutlery and till all fit around the coffee machine or on the passenger seat.”

He adds: “My dad did a similar project with a Smart car but there’s a lot more room in the Toyota and it’s much better built.”

There’s a great buzz around Coffee2Go – and not just from the customers ordering double espressos.

“I think the biggest compliment the car gets is people saying how professional it looks – they’re quite surprised to hear that my dad and I built it. I’ve had people saying they assumed it must be a franchise from one of the big coffee companies,” says Jason.

That couldn’t be further from the truth. Toyota iQ ownership is just one part of the story. Coffee2Go is very much a family effort – while Jason manages the day-to-day business, and his dad helped with the build, his mum Janet looks after the accounts.

Jason adds: “It’s a small business right now, but I’ve had a great response to the car. People love taking photos of it, and like the idea behind it – so hopefully I can keep it up longer term. I’d really like to build another car and expand.”

It may be early days, but the eye-catching nature of the Coffee2Go iQ has already led to repeat bookings at Croft race circuit, Newcastle, Sedgefield and Catterick racecourses and other events around the North East.

After the build, the iQ was given the finishing touches of a custom coffee bean wrap and the perfectly appropriate TC07FEE private number plate.

Toyota iQ ownership is working out well, then, but what’s the Coffee2Go iQ like to drive?

Jason says: “When it’s full of water and you’re going up a steep hill you can feel the extra weight a bit, but overall it’s still great to drive. As far as fuel consumption goes, I still get more than 60 miles to the gallon on the motorway, so it’s actually really cheap to run.”

The details of this article were correct at the time of publication in 2013.