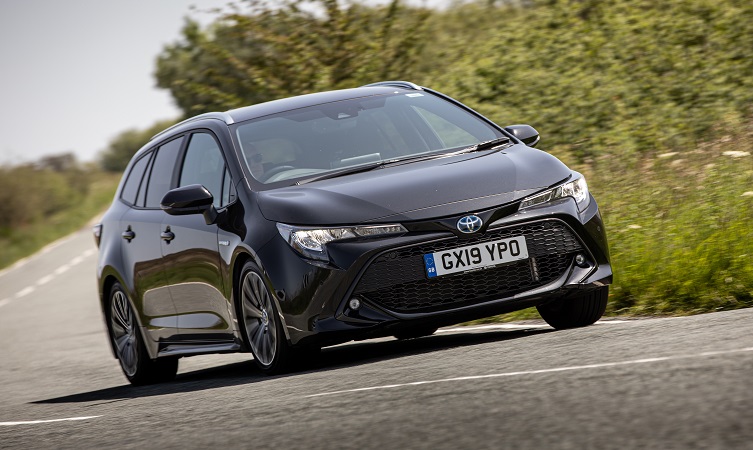 We’ve been delighted that our new Toyota Corolla self-charging hybrid, launched at the start of 2019, has been given such a positive reception by car buyers and motoring critics alike.

Not only has the Corolla already found homes with thousands of owners across the UK, but the qualities of our Burnaston-built car has been honoured by both Auto Express and Autocar, two of the nation’s most influential automotive publications.

The success for our brand doesn’t end there. Toyota and its award-winning products have come out on top of many independent motoring authorities and customer surveys.

Hence we’ve created this roll of honour – in essence an ‘online awards cabinet’ that we’ll update whenever a new award comes our way.

The most recent award for 2019 is detailed immediately below, while the earlier awards of the year are referenced underneath. 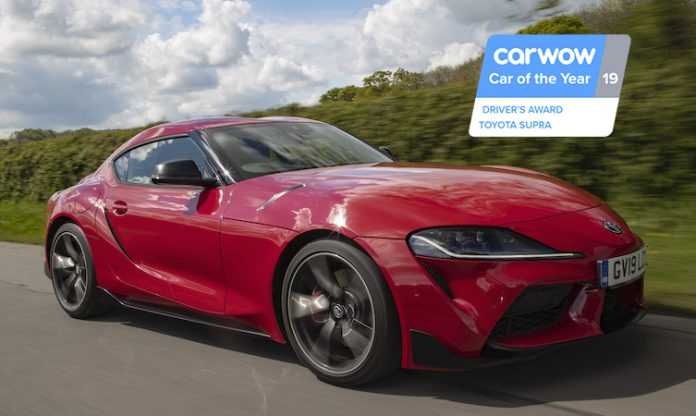 Award-winning Toyota: our most recent award

The consumer motoring website rated the wagon version of Corolla as the top pick for business thanks to its all-round package of style, usefulness, efficiency and day-to-day affordability. James Batchelor, Carbuyer Editor-at-Large, said: “2019 saw the return of the Corolla badge after a long hiatus.

“The combination of the stylish, practical Touring Sports body style and the efficient hybrid set-up is a winner for business buyers. Low ownership costs made it an easy pick for our Best Company Car 2020 award.” 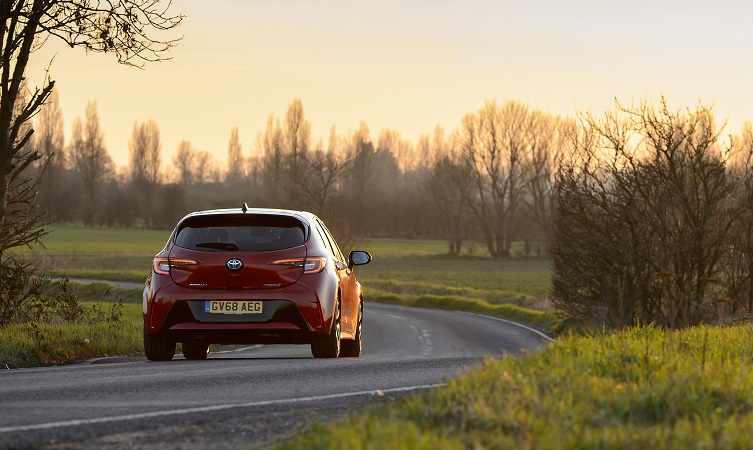 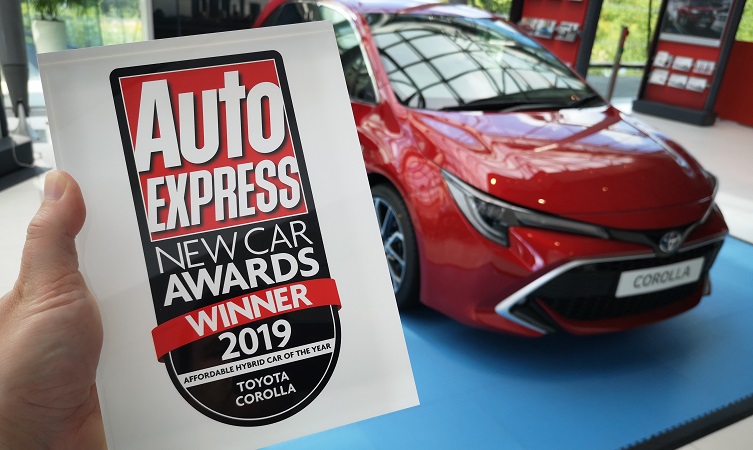 Carwow praises Toyota: In an awards ceremony held in London in October, the GR Supra won the Driver’s Award, with carwow’s Mat Watson proclaiming: “Great driver’s cars aren’t all about acceleration figures, top speeds and lap times. They’re about how they make you feel, and few are exciting as the Supra. The way it looks, sounds, its performance and rear-driven nature all make you smile.”

Toyota also won carwow’s Manufacturer Award. Watson explained why:  “Toyota is known for building dependable and economical cars. But now they are exciting too. The Toyota C-HR, Corolla and RAV4 look great, are good to drive and sit in and deliver impressive economy. Then there’s the new Supra which is just awesome – and comes with a five-year warranty. In short… the latest Toyotas are cars you can buy with your head as well as your heart.”

Auto Express hails the new British-built Corolla: The Toyota Corolla collected another major honour in July, being named Affordable Hybrid of the Year in the 2019 Auto Express awards ceremony. Auto Express praised the quality of the Corolla’s driving experience, its responsiveness, ride and handling, plus the practicality of the design and packaging for day-to-day use, and how the car delivers on the manufacturer’s goals.

The Yaris WRC was named Rally Car of the Year in the 2019 Autosport Awards. The car was proclaimed as the ‘benchmark of the year’ by the weekly motor sport title. Ott Tänak was declared Rally Driver of the Year for winning the World Rally Championship.

Twelve Toyotas given ‘Best Buy’ status in Which? Car Guide: Toyotas new and old were heralded for their reliability in the 2019/20 Which? Car Guide. The current-gen Yaris Hybrid, RAV4 Hybrid, Prius+ and Mirai joined used favourites such as the iQ, Auris and Prius Plug-in all topped Which? magazine’s independent lab tests.

Toyota C-HR and Hilux honoured in the Auto Trader new car awards: Toyota C-HR was named the Best Car for City Drivers, while the Hilux took the title of Best Pick-up. Their success was down to the opinions of the toughest judges – UK motorists themselves.

Business Car magazine proclaimed Lexus and Toyota as the Green Fleet Manufacturer of the Year at its annual awards ceremony in October. The two brands became the first recipients of the new award, which recognises the efforts of car makers to provide more environmentally efficient business fleet products and services.

In November Toyota reinforced its industry-leading environmental credentials with the title of Fleet Car Manufacturer of the Year in the 2019 GREENFLEET awards. GREENFLEET’s judges evaluated models released in the past 12 months, their environmental credentials and their impact on and use within the fleet sector. Activities linked to ultra-low emissions vehicles (ULEV) and green initiatives, such as internal and external awareness-raising campaigns, were also taken into account, together with the way manufacturers actively promoted their vehicles and technologies.

Toyota products and people honoured in the 2019 Autocar Awards: the new Corolla was recognised as a Game Changer for the market and Paul Van der Burgh, Toyota GB president and managing director, was named as an Outstanding Leader. 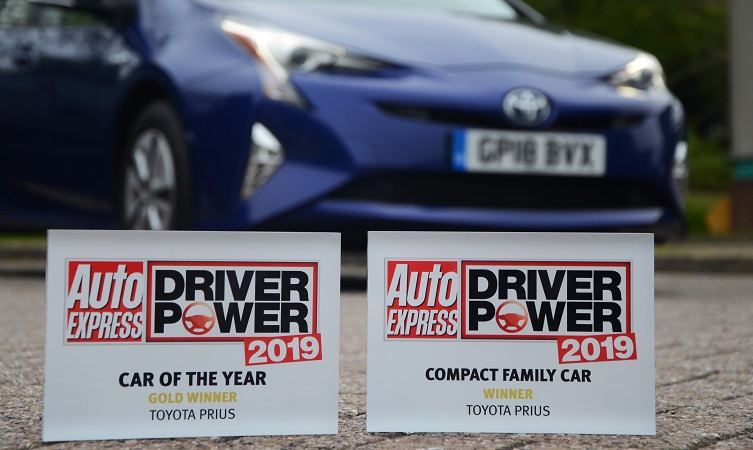 Prius is Car of the Year in 2019 Driver Power survey: Prius saw off all comers in the Auto Express survey, an honour that was all the more significant for being based on the opinions and real-world experiences of thousands of UK motorists. What’s more, it was an awards hat-trick, with Prius also topping the Compact Family Car category and achieving the best ranking for economy and running costs.

Toyota’s double success in 4×4 Awards: we were named manufacturer of the year and Land Cruiser won the “most improved” honour in the 4×4 Awards, presented by 4×4 Magazine.

Toyota is Green Fleet Manufacturer of the Year: in January, Toyota retained its number one position for the second year running in the Fleet News Awards.

Toyota Hilux wins best pick-up: our legendary Hilux added to its impressive tally of honours by winning the best pick-up title at the Business Van Awards.

Double top for Toyota as new Corolla and RAV4 excel in Euro NCAP: the models both secured a top five-star rating in the motoring industry’s independent safety testing programme.

Award-winning Toyota: not only, but also…

Toyota’s basketball robot: after sinking more than 2,000 hoops in a row, Toyota’s CUE3 robot is now a basketball-playing world record-breaker. 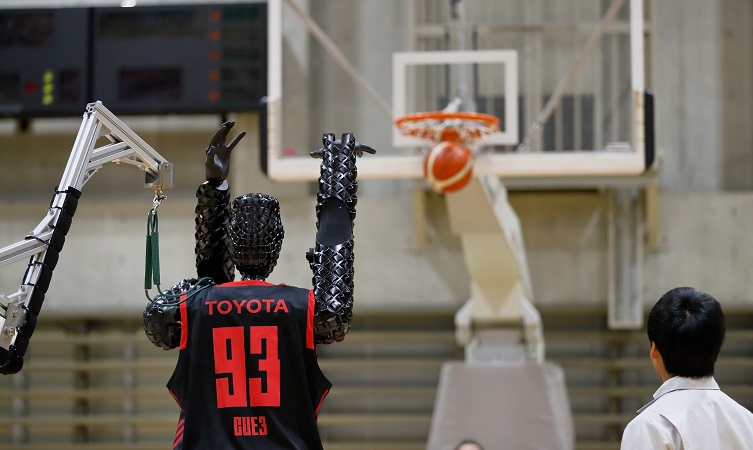 Top honours at the Inspiring Automotive Awards: Paula Cooper, director of our ConsumerOne division, was named the Inspiring Automotive Woman of the Year at the first Inspiring Automotive Awards, hosted at the RAC Club in London. Three other TGB employees were among the 30 award-winners: Rachel Shepherd (General Manager HR and Facilities); Emma Johnson (Manager, ConsumerOne Connection and Experience Innovation) and Marie Barry (Manager, Academy Strategic Projects). There was a further Advocate Award, presented to our President and Managing Director, Paul Van der Burgh, in recognition of his commitment to achieving a better gender balance within the industry.

Carbon Trust hails our environmental work: Toyota GB was recognised in the Carbon Trust Assurance Awards, winning the Best in Large Company Carbon Management category. The annual awards commend organisations that have excelled in their efforts to measure and reduce their environmental impact over the past year. The award is a further boost for our Environmental Challenge 2050, which you can read about here.