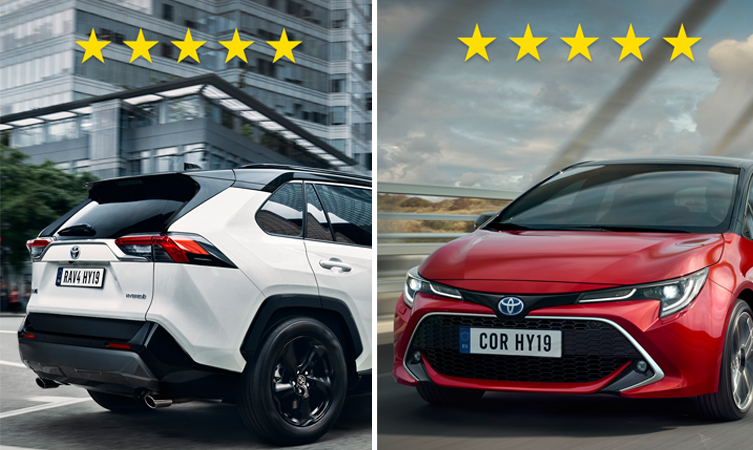 The new Toyota Corolla and RAV4 have both secured a top five-star rating in Euro NCAP’s independent safety testing programme.

Toyota Corolla safety and RAV4 safety was put to the test and both performed strongly across the board in the protection given to adult and child occupants as well as “vulnerable road users”, such as pedestrians and cyclists. Euro NCAP’s tests also recognised the effectiveness of the Toyota Safety Sense active safety systems, fitted as standard to all UK models.

The scores achieved in each test category are shown below.

The crash test results also demonstrate the designed-in strength of the Toyota New Global Architecture platforms on which the models are built, helping maintain the integrity of the cabin in the event of a collision. The robust structures are reinforced in critical areas and make strategic use of high-strength steels to absorb and channel impact forces away from the cabin.

The second generation Toyota Safety Sense package includes a Pre-Collision System which can detect pedestrians and cyclists in the vehicle’s path. The system scored maximum points in Euro NCAP’s testing at city speeds, with collisions being avoided at all test speeds. At highway speeds, collisions were avoided when approaching a slower vehicle. When coming up behind a stationary or slowing car, impacts were avoided in most cases, and mitigated in others.

The system’s pedestrian and cyclist recognition function also performed well, with collisions being avoided in all tests, in day and night conditions.

The impeccable results of the Toyota Corolla safety and RAV4 safety tests demonstrate the success of Toyota’s commitment to safety, which sits at the heart of its mission to make ever-better cars. Toyota ensures that the benefits of advanced safety technologies are not limited to high-end, high-specification models, but made available across the board, maximising their potential to make driving safer.