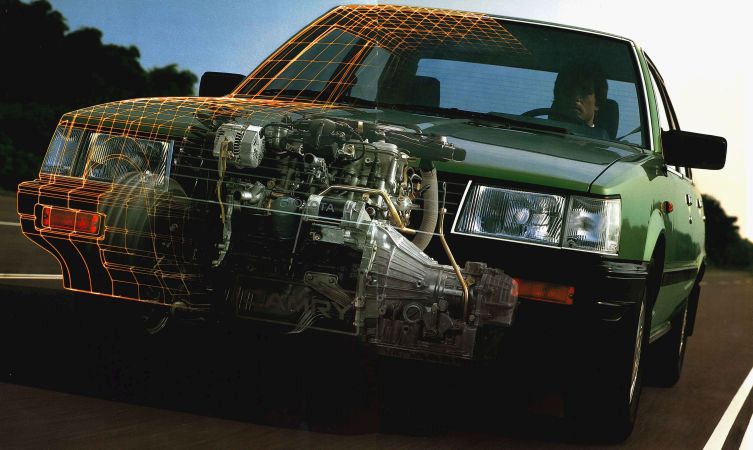 The Toyota Camry is now in its eighth generation, but when the first iteration arrived in the UK in 1983, it was more than just an all-new model. The 1983 Toyota Camry GL marked a significant moment in Toyota history, being the company’s first transversely mounted front-engine, front-wheel drive model.

But how was the innovative nature of this new flagship saloon first expressed to potential owners? The following text is based on that in the UK launch brochure, which helps us understand the 1983 Toyota Camry GL’s qualities and engineering within the intriguing context of early Eighties motoring.

The engine in the 1983 Toyota Camry GL may have been the first truly unique powertrain of the Eighties. In it, you would have found a number of very advanced engineering features.

The engine block was short, lightweight and strategically ribbed for rigidity. There was not a gram of extra weight anywhere. The crankshaft was hollow, yet five bearings and eight counterweights kept it extremely rigid and vibration-free. The overhead camshaft was also hollow, a super-rigid tube with the lobes sintered on for long-lasting, high performance. And you never had to worry about valve clearance adjustment because that was done automatically with hydraulic lash adjusters.

The cooling system featured a single-row radiator and thermostatically controlled electric cooling fan for optimum efficiency. Meanwhile, the coil and distributor were integrated in one unit for greater dependability.

The five-speed, precision transmission was specially designed for this transverse-mounted front-wheel drive. Fourth gear is overdrive and fifth is super-overdrive.

What’s more, Camry was the first front-wheel drive car to offer a four-speed automatic transmission with lock-up overdrive. What happens is that the lock-up feature provides direct drive from clutch to driveshaft – with no hydraulics to drain power. That means better response and greater efficiency.

Suspension is indispensable to a stable, comfortable ride. Check the facts on 1983 Toyota Camry GL: the front suspension was by MacPherson strut and featured an integral anti-roll bar, while the coil springs were offset five degrees to the centre of the shock absorber for a better ride.

Camber was easily adjusted and caster was matched to the steering, where negative king pin offset was used to improve steering response. Ventilated front disc brakes offered the no-fade stopping power you needed. There was an automatic warning device that told you when the pads have worn thin. And new, sealed-for-life wheel bearings lasted much longer.

The braking system itself worked off a nine-inch booster and dual pressure-sensing valve. The lines were dual and diagonal for stable braking.

Advanced engineering made 1983 Toyota Camry GL one of the most economical cars to run. It had a 1.8-litre engine but offered fuel economy equivalent to a 1.6-litre.

For the five-speed manual model, the tough urban cycle economy test produced a claimed consumption of 30.7mpg. The consumption at 56mph was 47.9mpg and at 75mph it returned an impressive-for-the-era 35.8mpg.

Many factors gave Camry excellent fuel efficiency ratings, such as aerodynamics. The big Toyota wind tunnel was used to perfect the final body shape. As a result, the drag coefficient was an impressive Cd 0.38. Contributing to this low drag figure were the slanted nose and bonnet, front spoiler, and extra smooth body lines. Camry’s lightweight body was another factor – high-tensile steel was used strategically for reinforcement with additional steel and torque boxes. Even the engine was engineered to save weight.

Inside the Toyota Camry you would have discovered an interior made more spacious, thanks to the transverse engine position. The result was impressive passenger space, front and rear. Camry was designed to easily accommodate passengers or luggage, or a combination of both .

What’s more, Camry was designed for comfortable driving and riding. For tailor-made comfort, the driver’s seat had seven separately adjustable features. You could adjust for reach, rake and lumbar support, the height and reach of the headrests, and the height of both the front and rear edges of the seat cushion.

The ventilation and heating systems were incorporated. Ventilation came through a wide centre vent that showered air rather than creating a direct current, while the flow of air could be boosted via the heater fan, or directed through the outer vents.

During its development, no part of the Camry went unnoticed by our engineers.

Long-lasting durability was an important goal. That’s why the body was designed and built to ward off corrosion. Galvanised steel, for example, was used in 16 different locations, including the bonnet, sills, boot lid, pillars and other strategic places.

For greater protection, hem adhesives and effective sealers were applied to keep moisture from corroding the interior surfaces. All Camrys were immersed in undercoating twice, the second being a non-chip PVC coating. Finally, resin clips and nuts were used to secure metal trim to further fight corrosion.

The end-product of modern engineering, the Camry was designed to be lightweight, with a durable and rigid bodyshell. To save weight, high-tensile steel was used in the bonnet, door panels, front suspension members, the front side members, the bumper stays and the lower arm brackets.

Selected areas were additionally reinforced to assure rigid construction. These included the front pillars, around the hinges, the roof sides, and around the sills. What’s more, the front side and rear floor members were integrated into the sills as part of the car’s unitary construction.

Camry was assembled at the Tsutsumi plant in Japan using parts that met Toyota’s rigid quality standards. Continual testing along the line combined with watchdog computers to assure that nothing adversely affected quality during the assembly process. Then every Camry was thoroughly inspected at the end of the line just to make doubly sure.

Camry was more than a new name; it represented a new breed of car from Toyota: a superbly equipped, four-door, front-wheel drive saloon. When it came to performance, the punchy, transversely mounted 1,832cc engine boasted a 0-60mph figure of 12.8 seconds and a top speed of 100mph. And when it came to economy, the 1.8-litre Camry GL ran rings around its competitors. The automatic version had a unique three-speed plus overdrive transmission with lock-up converter.

Road-holding was exceptional, thanks to all-round independent suspension allied to rack and pinion steering. Inside, nothing had been spared to ensure your comfort and safety, with thoughtful features included as standard equipment – further evidence of Toyota’s unrivalled value for money.

You would have found that for a car of its size, the Camry GL offered you more. More space for passengers and luggage, more advanced engineering and more miles to the gallon. In fact, if you thought that the Camry GL sounded as if it offered the best of all worlds, then you would have been right.