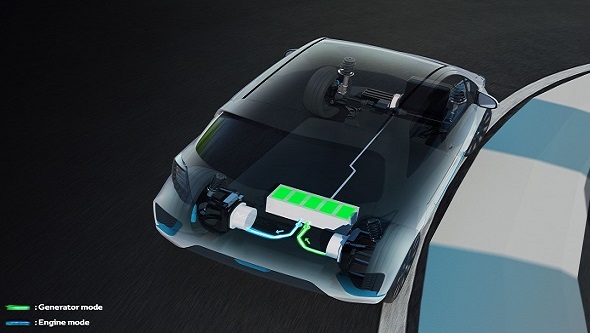 The Toyota Yaris Hybrid-R concept offers four-wheel drive and a staggering 420bhp, it has been confirmed.

The front wheels are driven by the all-new engine while those at the rear are each individually powered by a 60hp electric motor – the same as those used in the standard Yaris Hybrid.

A third electric motor also features, and is located between the engine and the car’s six-speed sequential transmission. This 60hp motor has no effect on drive, but instead operates as a generator in two different cases: during deceleration to recover energy from the braking force and during acceleration to directly power the rear electric motors.

All together, the Hybrid-R system develops 420 hp.

However, unlike the road car, the energy recovered during the braking phase is stored in a supercapacitor which offers a higher power density than the standard NiMh hybrid battery.

Using technology developed for the TS030 Hybrid Le Mans car, the supercapacitor is perfectly suited to the requirements of driving on track, which requires brief and immediate bursts of power.

Driving modes and advanced traction control
The Toyota Yaris Hybrid-R offers different driving modes, to suit different driving conditions. In road mode, the supercapacitor releases the energy recovered under braking for a maximum duration of 20 seconds per charge and the total power of the two electric motors is reduced to 40 hp.

In track mode, the rear electric motors reach a combined maximum power of 120hp for up to 5 seconds per charge, reflecting the higher frequency of braking and acceleration events during circuit driving.

The third electric engine behaves like an advanced traction control system, redirecting the torque as electric energy to the rear wheels, to boost the acceleration and improve the handling rather than to simply limit the engine power.

In addition, the rear electric motors  are tuned to influence the Yaris Hybrid-R handling characteristics during cornering by altering the distribution of torque between the left and right rear wheels.

Depending on the radius of the curve, the system can send more power to the outside rear wheel (medium curves), or apply more braking force to the inside wheel (fast curves), or even brake and accelerate each wheel independently (slow curves) to adjust the yaw effect for a better line, to limit steering angle and reduce understeer.