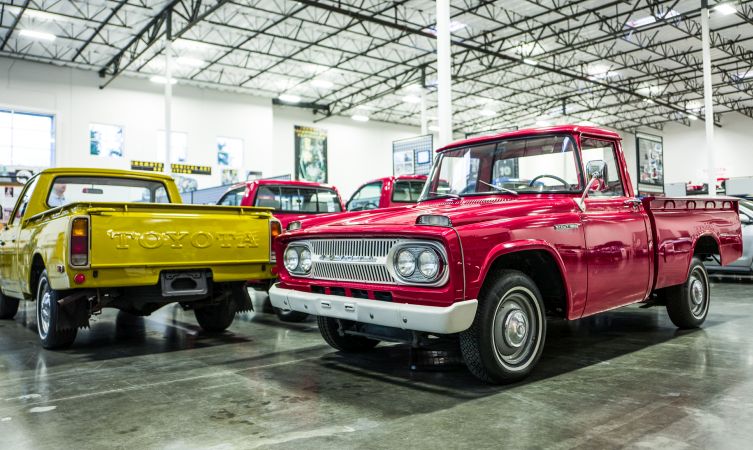 The Toyota USA Automobile Museum was located within the sprawling headquarters of Toyota Motor Sales in Torrance, California. In September 2017 it closed after the manufacturer moved its USA headquarters to Texas and opened a new Experience Centre.

Less than a year before the closure of the Toyota USA Automobile Museum, however, we had a chance to look around the amazing exhibits. Here we describe some of the highlights.

Its physical address is no secret, but it is strange to note that the huge industrial unit has no signage on the outside. So unless you were actively looking for it within the campus, this incredible museum would be all too easy to miss.

First opened to the public in January 2000, the museum contains a phenomenal showcase of Toyota vehicles and memorabilia, tracing the manufacturer’s impact on North America since its introduction in 1957.

Illustrating that story are more than 100 significant road cars and around a dozen motorsport vehicles, the combined value of which is estimated at over $12 million.

When you visit the Toyota USA Automobile Museum, you end up ‘pinballing’ erratically from one exhibit to the next as different models catch your eye and demand attention. Nevertheless, we hope that the ordered selection of details and images below offer a flavour of the quality exhibits on show.

Guarding entry to the main exhibition hall is a fully restored 1958 Toyopet Crown (below), one of just 287 examples supplied in the first year of availability. The very next year the Crown was removed from sale as it was not well adapted to the needs of US consumers, leaving Land Cruiser as Toyota’s sole offering in the US until 1964.

One of the most important milestones in Toyota’s North American history was the introduction of the Stout pick-up in 1964. In its first year, only four examples were sold, though this rose to a grand total of 4,000 units by the end of its two years on sale. This red example (and opening image) is from 1967.

As was also the case in the UK, the 1965 Toyota Corona marked the beginning of Toyota’s acceptance as a passenger car manufacturer in the USA. This 1900cc model offered more than double the power output of some contemporary vehicles. Sales of 14,764 in 1966 alone exceeded that of all Toyota models sold to that date.

Lurking among the old-timers in the Toyota USA Automobile Museum is a vehicle that looks suspiciously like a 1936 Toyoda Model AA. But on closer inspection it is actually a special Toyota Technocraft project based on much more modern Hilux underpinnings.

This 1971 Toyota Crown represents the last year that the model was available in the US. Never quite hitting the mark for US consumers, the Crown remained a marginal player for Toyota compared to the incredibly popular Corolla model. Just 3,934 units were sold in that last year.

In comparison, this Toyota Celica ST was one of 17,572 Celica models sold in 1971, which made it Toyota’s most successful new model introduction at the time. So well received was the Celica that it could be argued that it popularised the modifying and racing of sport compact cars in the US.

Among the exhibits at the Toyota USA Automobile Museum are three first-off-the-line vehicles from new manufacturing plants in North America.

This 1987 Toyota Corolla FX16 (above) was the first car to emerge from the New United Motor Manufacturing Inc. subsidiary plant in California, while this 1989 Toyota Camry LE (below) was the very first car off the production line at Toyota Motor Manufacturing Kentucky. More than a quarter million Camry models followed it that year.

Finally, this modest-looking 1990 Toyota Corolla LE saloon (below) was the very first car off the production line at Toyota Motor Manufacturing Canada. This new facility helped accelerate worldwide Corolla sales, which in June of that year hit 15 million units.

But the museum doesn’t simply concentrate on sales achievements; it celebrates other successes, too. Such as the Prius that hit 130.74mph on the Bonneville Salt Flats in August 2004, creating a new hybrid racing class within the famous National Speed Week.

Less well-known, perhaps, is this 1991 Toyota MR2, which reached the dizzy heights of 238mph across the Bonneville Salt Flats in 1992. Timed over three runs, its average speed of 211.071mph has yet to be beaten by any other Toyota.

Talking of the Celica, who knew that this 1982 Toyota Celica GT came ‘straight outta Compton’? Not only was the convertible conversion carried out in a special facility in Compton, California, but the model offered the industry’s first five-speaker subwoofer sound system.

Meanwhile, could this 3,000-mile 1979 Land Cruiser be the world’s least used and most original Toyota FJ40? It seems incredible, given that 1979 also marked the introduction of such luxuries as power steering and servo-assisted brakes.

Incidentally, Land Cruiser is the only model with an unbroken history of sales since Toyota arrived in the United States.

No museum of Toyota history would be complete without mention of the 2000GT. In that respect, the Toyota USA Automobile Museum is blessed, having three examples of the car as well as a display engine.

Of the trio, this ‘Golden Car’ is the highlight. Toyota only produced two vehicles in this colour, and this very car (#10130) was displayed at the 14th Tokyo Motor Show in October 1967. British model Twiggy was hired to stand next to the 2000GT at the show, and was so enamoured with it that she went on to own the car.

Nearing the end of the tour, motorsport corner is the one part of the museum that distances you from some of the display vehicles. However, elevating some of the cars above floor level made the overall area appear even more impressive.

It was hard to know where to look, from the wedge-shaped IMSA GTP Eagle MkIII that won 21 of the 27 races it entered, to selected vehicles from the 36-year history of the Toyota Pro/Celebrity Race series. But our favourite had to be the IMSA GTU-class Celica that inspired one of the models in our fleet of retro-livery GT86s.

More than simply a collection of immaculate cars, the Toyota USA Automobile Museum uses memorabilia and contemporary reports to create a broad picture of how Toyota has consistently demonstrated a firm commitment to understanding the motoring needs of the public.

Please note: this article was correct at the time of publication, but the museum is now closed.