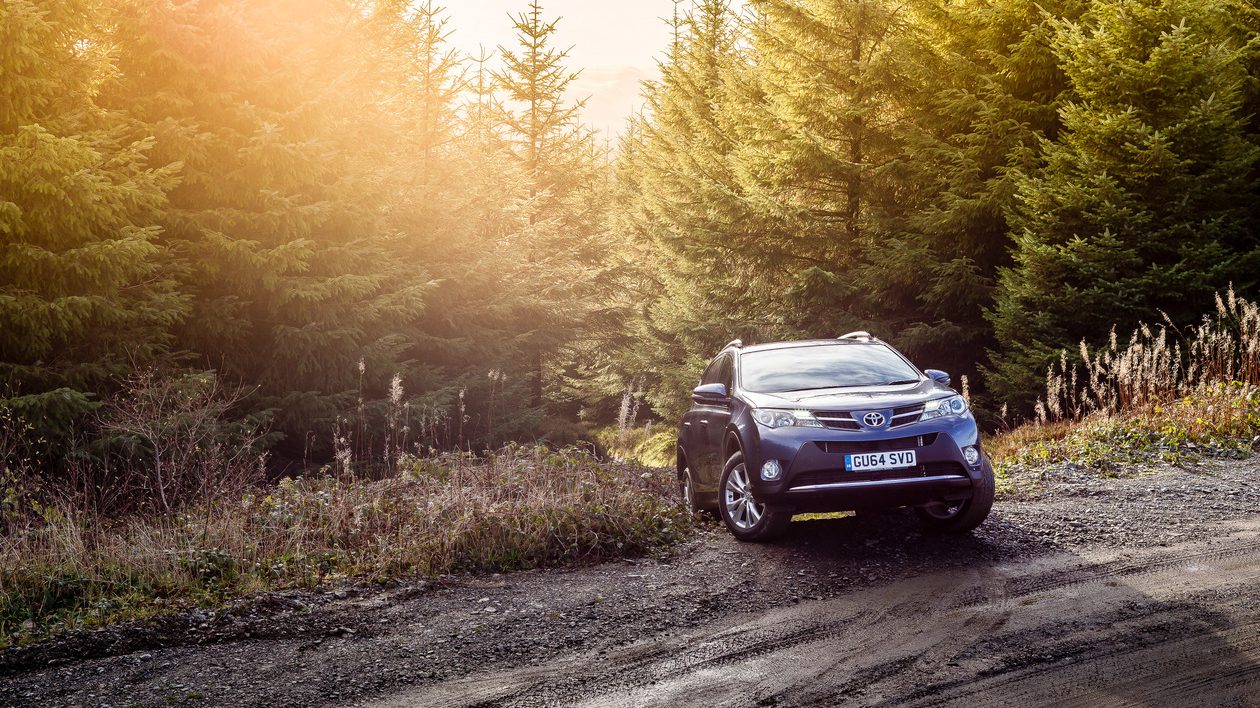 From its introduction in 1994, the Toyota RAV4 was never designed to compete with the off-road capabilities of its Hilux and Land Cruiser siblings. The model name is a contraction of Recreational Active Vehicle with four-wheel drive – a description that identifies the RAV4 as a lifestyle vehicle with the additional benefit of some all-wheel drive performance.

To dismiss the fourth-generation Toyota RAV4 as an urban-only SUV undersells the sophistication of its chassis. Its ability off the beaten track comes courtesy of two different optional all-wheel drive systems designed to keep you safe, under control and mobile in conditions that would likely be impossible in a traditional car.

In addition to the familiar Toyota Hybrid engine and motor powering the front wheels, models with E-Four all-wheel drive employ a second, rear-mounted electric motor to power the rear wheels. This allows torque to be distributed between all four wheels, improving grip and stability.

In normal driving, all of the car’s power is sent through the front wheels as this is the most fuel-efficient use of the energy. The RAV4’s electronic control unit constantly monitors data such as vehicle speed, accelerator angle and wheel speed to calculate the optimal spread of torque. If it detects a need for more torque at the rear (such as if the front wheels are slipping), it instructs the rear motor to send a precise level of torque to the rear wheels to make up the shortfall.

Up to 60% of the car’s total power can be sent to the rear axle. So when you’re pulling away, going up a hill or driving on a low-traction surface, having a measure of torque delivered to the rear wheels makes it easier to set off in a controlled manner. The E-Four system can also shuffle torque delivery across both axles to deliver a sportier, more assured driving experience.

The fourth-generation RAV4 features a programme that co-ordinates every function of the four-wheel drive system, stability control system and electric power steering. Compared with the all-wheel drive setup in the third-generation RAV4, this new management system does not always need to rely on slip detection before deciding on the distribution of torque to each wheel.

The driver has the option to come out of this default setting and increase the level of the system’s interaction by engaging Sport mode, activated by a button in the centre console. Like a heightened level of awareness, this mode sends data to the relevant ECU from sensors monitoring vehicle speed, steering angle, throttle input and yaw rate, which the programme then uses to determine the proportion of torque to send to the rear wheels.

This is physically actioned by varying the strength of electric current heading into an electro-magnetic solenoid in the control coupling located ahead of the rear differential (see image above). Depending on driving conditions, the amount of torque being directed into the differential can vary by as much as 50%, from the car being entirely front-wheel drive for optimum fuel efficiency to an equal sharing of torque between the two axles.

So accurate is the monitoring of vehicle behaviour that the shuffle of torque between the axles will have already started before any slip or understeer is detected. From the moment the steering is turned, the system automatically adjusts to a 90:10 front/rear torque distribution, priming the car to deliver optimal cornering poise and grip. This simultaneously reduces the load on the front wheels and the likelihood of experiencing understeer.

Should the cornering force go on to exceed the car’s adhesion to the road surface, however, yaw rate controls react within milliseconds to instruct the system to apply up to 50% of the available torque to the rear wheels to improve grip.

There are times, such as in snow or on steep gravel tracks, when the driver will know before even setting off that grip levels will be poor. In this instance, it is possible to maximise grip by locking the torque distribution in a 50:50 ratio at speeds up to 25mph. This locked function is activated simply by pressing a button to the left of the steering column, which then illuminates a discreet warning light above the fuel gauge.

Thanks to a minimum ground clearance of 187mm and relatively short overhangs, the fourth-generation RAV4 is capable of riding over heavily rutted tracks and clambering over relatively large obstacles. So although the RAV4 may be categorised as a modern soft-roader, its adoption of Toyota’s technology and four-wheel drive expertise means the RAV4 is anything but ‘soft’.