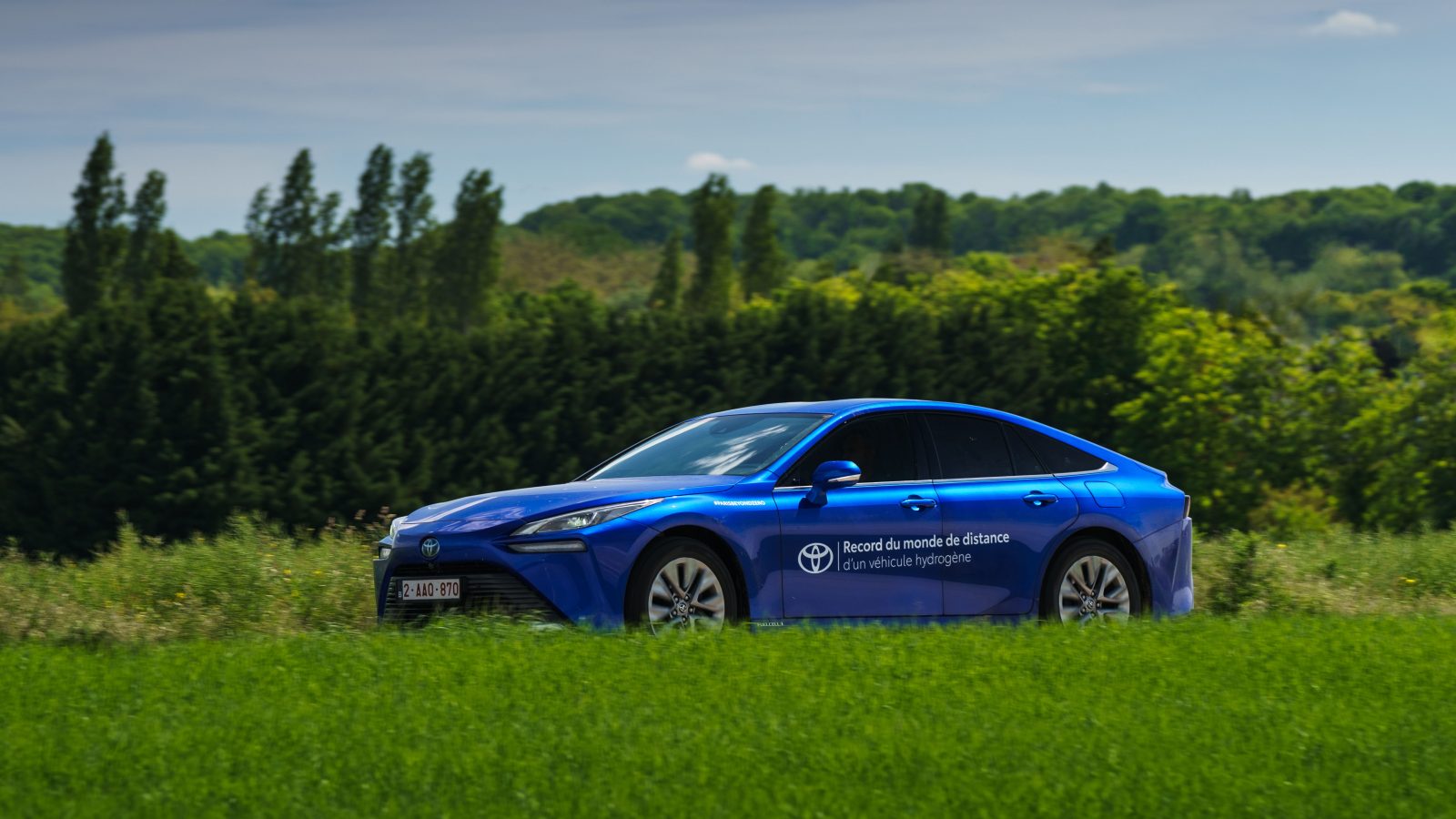 A Toyota Mirai has covered more than 1,000 kilometres on a single tank of fuel, surpassing previous long-range achievements for a hydrogen fuel cell vehicle.

The journey, undertaken in France during Paris de l’hydrogène – an exhibition on hydrogen and renewable energies – started in Orly and covered 1,003 kilometres of public roads in the Loir-et-Cher and Indre-et-Loire areas, with the distance and fuel consumption certified by an independent authority.

Green hydrogen was used to fuel the Mirai and overall consumption was measured at 0.55 kg/100km.  Upon completing the challenge, the Mirai was refuelled within five minutes.

The fuel cell electric vehicle from Toyota, the new Mirai offers a 30 per cent greater range, enhanced driving performance, better fuel efficiency, and a price tag almost 25 per cent lower than its predecessor.

The increased efficiency of the fuel cell system, coupled with a 1 kg increase in hydrogen capacity gives the Mirai a certified range of approximately 650 kilometres (400 miles), under normal driving conditions.  While the 1,000-kilometre marker was broken by Toyota’s drivers adopting an economical driving style, no techniques were used that could not be replicated in everyday driving.

Frank Marotte, CEO of Toyota France, reflects on the achievement: “It’s an amazing result that we achieved with the new Mirai. One that embodies the mindset of Toyota’s Start your Impossible mentality of going beyond our own limits. This drives us and we proved it again today. I would like to thank the teams of Toyota France and Toyota Europe, as well as Victorien at Energy Observer, with whom we share the same vision and the same ambition. It is through strong partnerships that we will be able to contribute to a better and more environmentally friendly society.”

Four drivers completed the drive, including Victorien Erussard, the founder and captain of Energy Observer – a self-sufficient, zero-emission boat that uses a Toyota fuel cell stack.

As well as operating the round-the-world vessel, Energy Observer is a company that combines expeditions with investigating sustainable energy solutions. It recently presented an exhibition village dedicated to renewable energies and hydrogen in Paris.

During that event, the Eiffel Tower was illuminated using green hydrogen, thanks to the GEH2® hydrogen generator developed by the EODev start-up organisation, of which Toyota is a shareholder.

Victorien Erussad, founder and captain of Energy Observer (above), was excited by the scale of the challenge: “I am very happy to have taken this challenge of 1,000 kilometres behind the wheel of the new Mirai. Toyota has always been at the forefront of hydrogen innovation and our collaboration gets stronger year on year. As a former open ocean racer, I need to take challenges and I warmly thank Frank Marotte and his teams for taking me on this zero-emission adventure, showing that nothing is impossible and that hydrogen mobility is here today!”