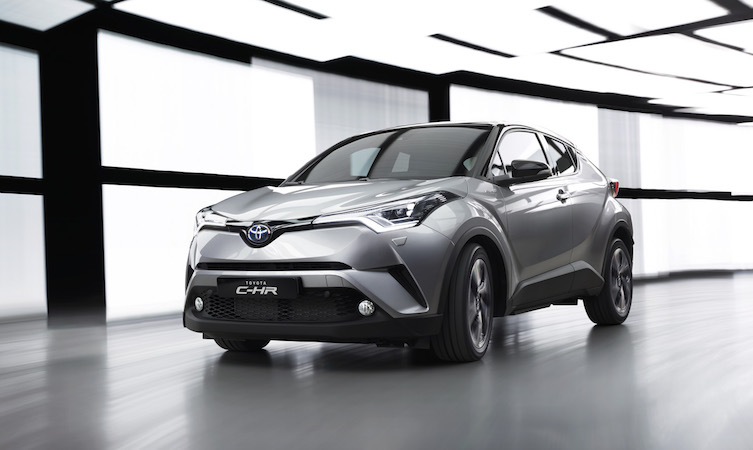 Making its world debut at the 2016 Geneva motor show, the C-HR gives Toyota a new presence in the crossover market.

Designed to stand out both within the Toyota line-up and in its segment, it represents Akio Toyoda’s determination to allow greater stylistic freedom and promote engineering creativity in order to achieve eye-catching designs and enhanced driving pleasure.

If you want to find out more about the Toyota C-HR, sign up to our latest news alerts

The unique character of the C-HR demonstrates the flexibility of the Toyota New Global Architecture (TNGA) for vehicle developers in the three key areas of design, powertrain and dynamics, allowing them to deliver a fresh take in the increasingly popular crossover segment. 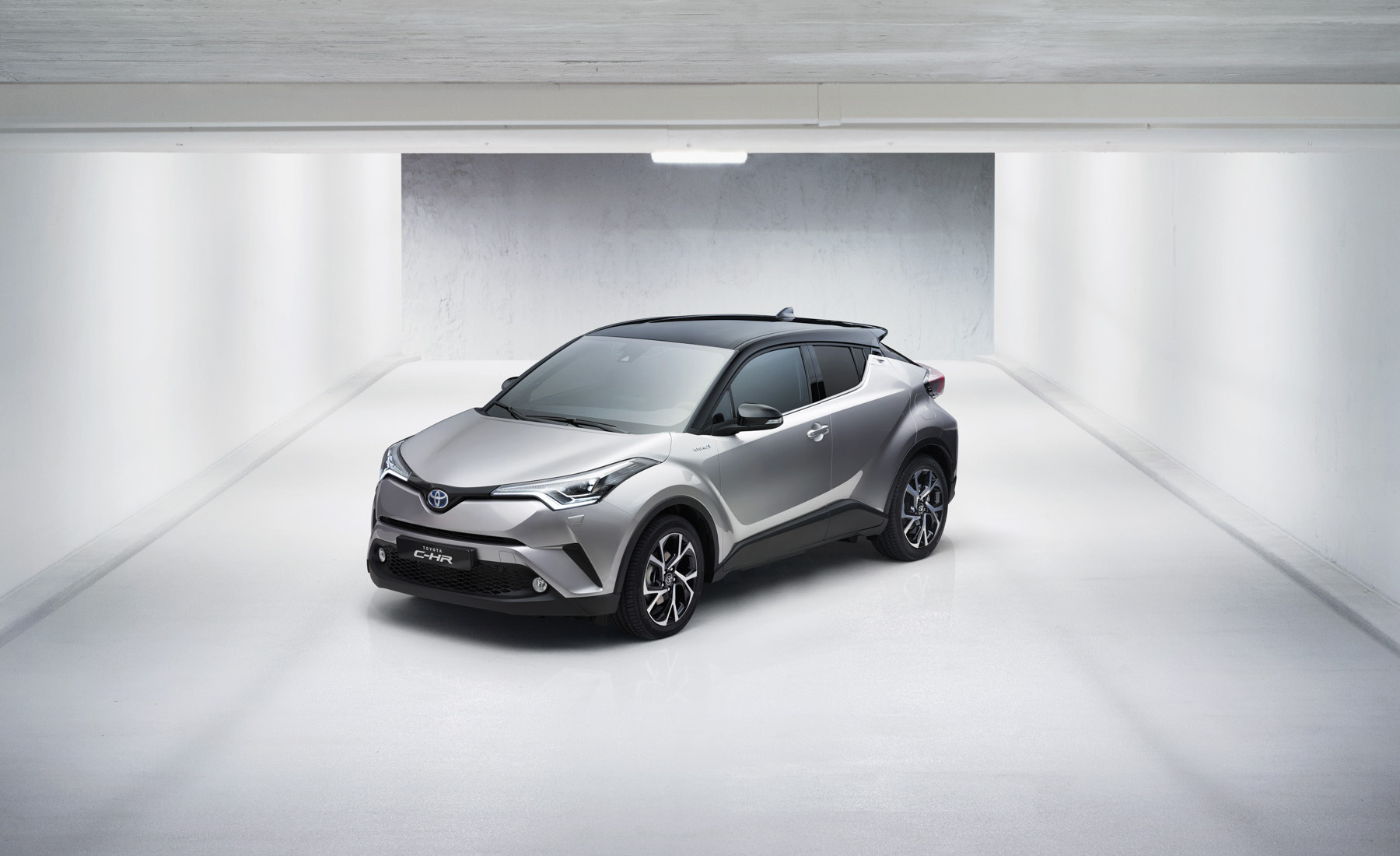 As a result, the Toyota C-HR remains remarkably true to the general features of the concept-cars that attracted so much public attention at Paris in 2014 and Frankfurt in 2015. The coupe-like lines are a testimony to the resolve of its designers to create a style that stands out in the Toyota range, and to establish a new direction for mid-sized crossovers.

The C-HR also brings innovation to its segment through the introduction of a hybrid powertrain. Using Toyota’s very latest 1.8-litre hybrid system, the driving experience is matched to a level of efficiency previously unseen in the crossover segment.

Finally, guided by Chief Engineer Hiroyuki Koba’s vision “Response, Linearity and Consistency” the driving dynamics have been deliberately benchmarked on the precision and control experienced at the wheel of a modern C-segment hatchback, thanks to the refinement of the TNGA platform and its low centre of gravity.

The aim was to allow the C-HR to carry its speed through corners, with excellent body control and steering fluidity. C-HR is designed not only to be enjoyable when flowing through busy city traffic but also on the open road independent of the surface condition. 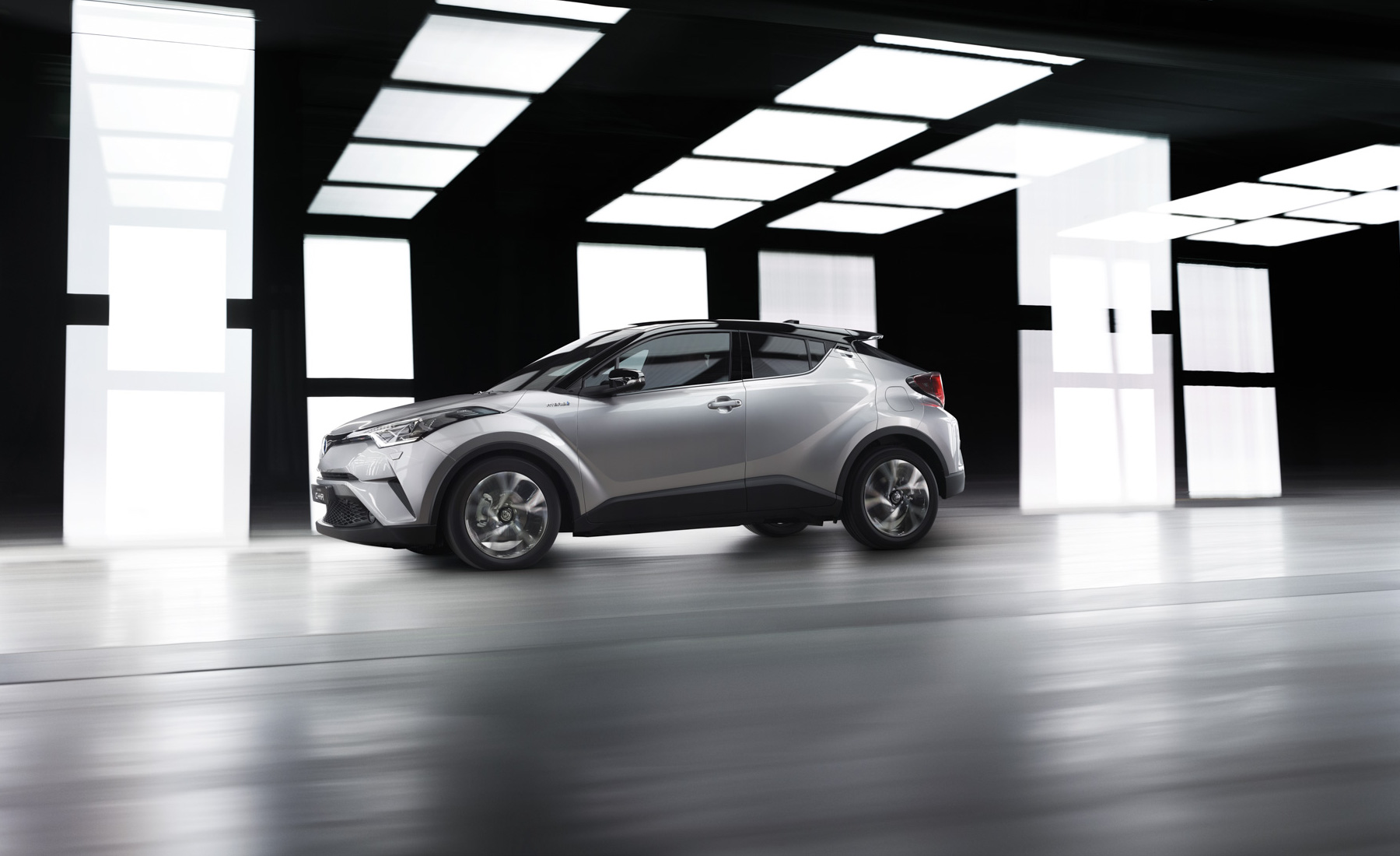 The C-HR introduces a distinctive styling featuring a body with a diamond architectural theme with wheel arches projecting prominently at all four corners to emphasise the new crossover’s strength and rigidity. The C-HR’s modulated structure combines the powerful lower body and raised ground clearance with the slim and sleek cabin profile of a coupe.

The front represents a further development of Toyota’s Under Priority and Keen Look design identity. The slender upper grille flows from the Toyota emblem into the sleek, aggressive wing extremities of the headlamp clusters and wraps fully around the front corners of the vehicle. 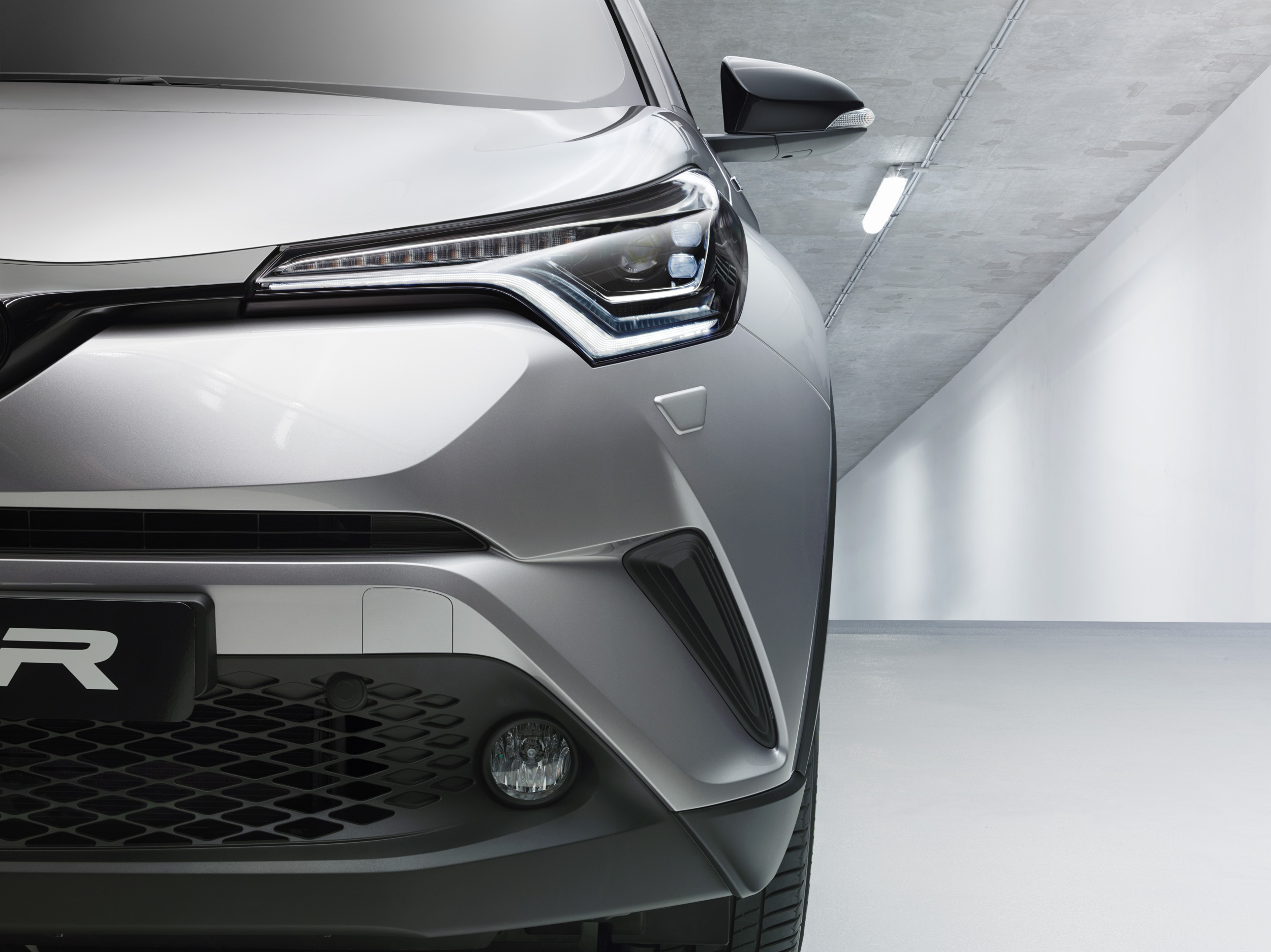 The lamp clusters incorporate full LED lighting with light guides and sequential turn signals, giving the C-HR its own unique visual signature. Below, the enhanced three-dimensionality of the bumper that’s integrated with the wheel flairs and the trapezoidal lower grille architecture reinforce the C-HR’s wide, firmly planted stance.

The movement of the blacked out rocker panel towards the front and rear wheel, along with the shoulder axis that runs through to the front and rear emphasize the fast-looking, “lift-up” feel of the thin body. The C-HR’s coupe-like styling is further enhanced by disguised rear door handles integrated within the C pillar, and the powerful projection of the sweeping roofline into a large, skeletal frame rear spoiler. 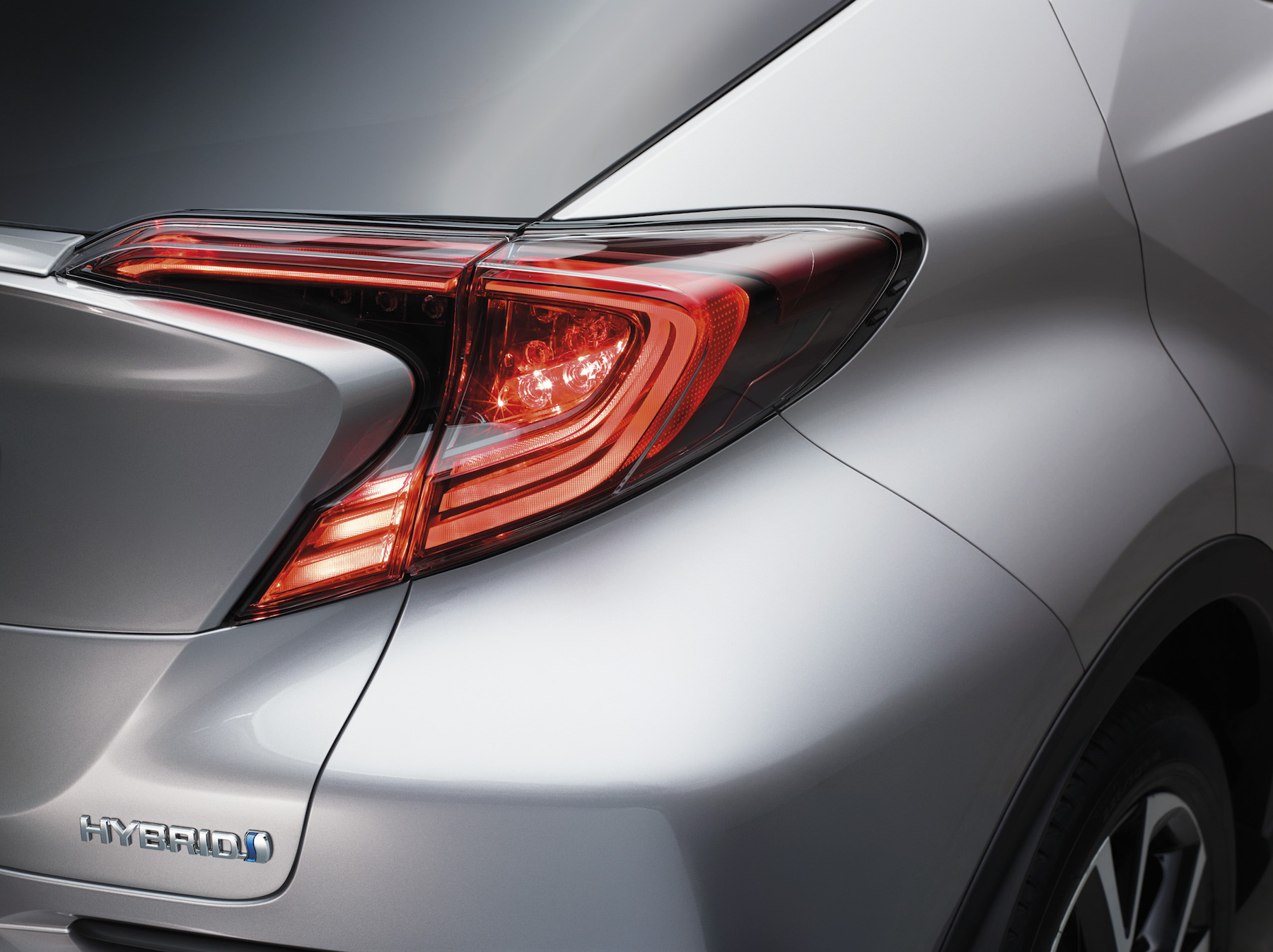 To the rear, the strongly tapered cabin integrates the back door while securing luggage space. This contrasts with the pronounced flaring of the wheel arches to give the new crossover a wide and extremely powerful stance. Standing proud of the tapering body work, prominent rear light clusters may also be equipped with LED lamp technology to give the C-HR an equally expressive rear light visual signature.

This car is the result of a global cooperation between design centres on three continents and was managed by Project Chief Designer Kazuhiko Isawa. The original exterior design was created by Calty, the Toyota design studio in California.

The C-HR will be equipped with two powertrains in the UK including the latest-generation full hybrid power plant: With CO2 emissions of less than 90 g/km it is unrivalled within its segment.

Delivering 122 DIN hp, this new hybrid powertrain is more efficient and lighter, and offers sharper performance than previous hybrid systems. Detailed design changes to the engine have resulted in a thermal efficiency of 40% – a world-beating performance for a petrol unit. Other hybrid system components have been made lighter and smaller, and have been repositioned for optimum packaging, further contributing to the car’s lower centre of gravity.

Alternatively, the Toyota C-HR is available with the new 115 DIN hp/85 kW 1.2 litre turbo engine, (first shown in the Auris). This will have a choice of 6-speed manual gearbox or a Continuously Variable automatic Transmission system, which is developed to meet expectations in response and direct feel for European customers familiar with manual and automatic gearboxes. The CVT is available in front-wheel or 4-wheel drive versions. A 2.0-litre CVT-only model will also be available but only for certain markets, (not for UK).

Our photographer was on hand at the Geneva motor show to take some great photographs of the Toyota C-HR as it was unveiled.

See the moment the Toyota C-HR was unveiled at the Geneva motor show. 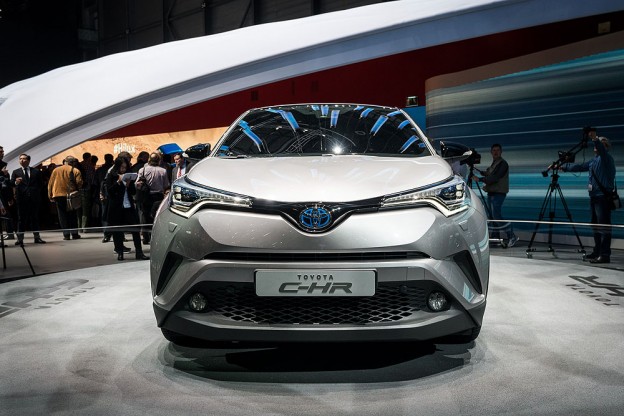 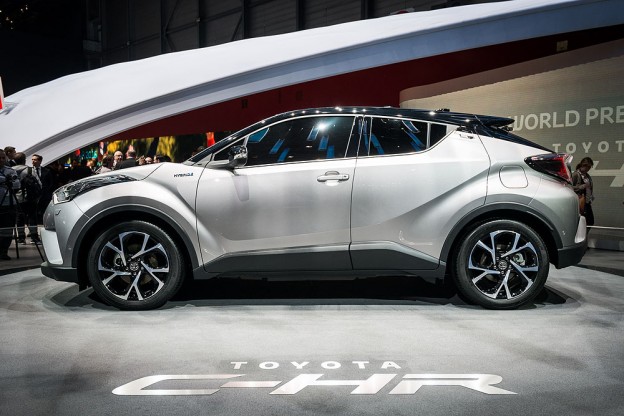 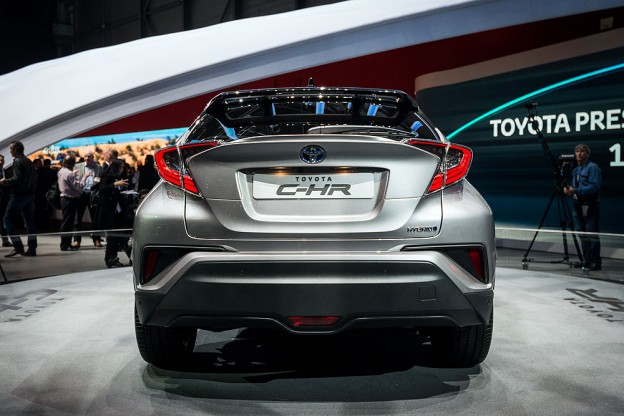 The Toyota C-HR sits in the heart of the C-Crossover segment. What this means is that the C-HR is just 4cm shorter than the previous generation RAV4 and longer than the Honda HR-V, Mazda CX-3 and Nissan Juke.