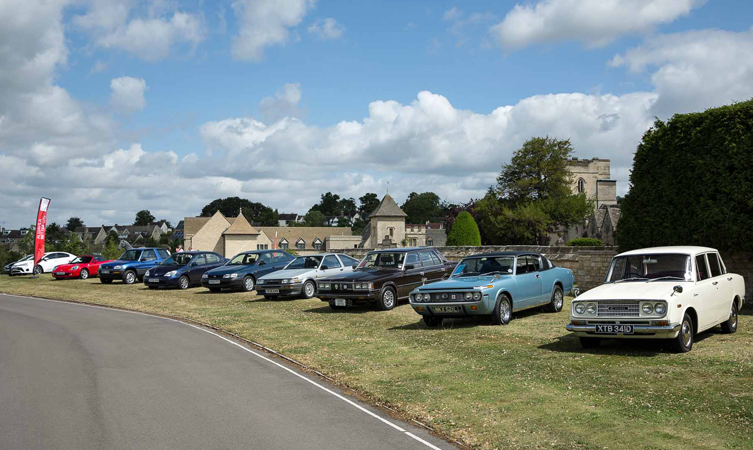 In 1965 Toyota made a modest entry into the UK car market, its arrival marked by a small four-car stand at that year’s motor show. Today, Toyota has not only sold almost three million vehicles in Britain, it builds them here, too.

Although a great deal has changed, there remains a constant theme in Toyota’s business that is as true today as it was 50 years ago, as Paul Van der Burgh, Toyota (GB) President and Managing Director, explained: “Toyota entered the UK market with the aim of providing better cars and better service, even if those weren’t the words used back then. But ever since, Toyota has stood out for giving the customer something better – better equipment, better reliability and better service.”

Pride and Clark was the original UK importer and distributor, a South London family firm that launched its enterprise after John Pride travelled to the Far East to see the developing Japanese car industry for himself. His faith in Toyota was shared by a handful of car retailers who set up the first Toyota showrooms, at first with just a single model line – Corona – to offer their customers.

Business prospered as the range of vehicles grew, not least with introduction of the first Corolla in 1966. The name Toyota (GB) Ltd was adopted in 1967 and by 1980 200,000 cars had been sold, securing its position as a leading player in Britain’s car market.

Nine years later Toyota announced the UK as the location for a European manufacturing centre. Toyota Manufacturing UK’s Burnaston car plant in Derbyshire and Deeside engine factory in North Wales came on stream in 1992 and have benefited from more than £2 billion investment in technology, skills and jobs. They continue to provide valuable opportunities for more than 200 supplier businesses.

TMUK also has the distinction of being the Toyota’s first hybrid vehicle manufacturing centre in Europe, building Auris Hybrid models since 2010.

Tony Walker, TMUK Deputy Managing Director, said: “All the work we have done so far has created a solid foundation for the future. The next exciting step for TMUK is to develop our skills ready for the adoption of TNGA – Toyota New Global Architecture. It’s not just about new products, it’s a new approach to making them.

“We have plenty of work ahead of us to be ready to adopt the new way of working by the end of the decade, but I strongly believe that, as the last 25 years have shown, we will be ready.”

In its 50th year in the UK, Toyota has already launched new Avensis and Auris models – all built at Burnaston. Later this year it will also begin marketing the first of its Mirai hydrogen fuel cell vehicles here, opening a new chapter in zero emissions driving with technology the drivers of those first Corona saloons could never have imagined.

While Toyota’s focus is on the future and the development of ever-better cars, it honours the achievements of some its influential models of the past in a heritage fleet, maintained by Toyota (GB). The classic line-up includes an original Corona saloon, the famous Corolla AE86 that helped inspire today’s GT86 coupe, a first-generation RAV4 and one of the earliest British-built models, a 1992-vintage Carina E.

Facts from 50 years of Toyota in the UK