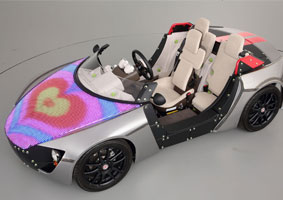 Toyota will exhibit a booth dedicated exclusively to the Camatte, a customisable, sporty, family-oriented concept, at the International Tokyo Toy Show 2014.

The Camatte concept, which was originally shown at the 2012 International Tokyo Toy Show, conveys the appeal of cars to current and future drivers alike by enabling parents and children to share the joy of driving and customising.

Toyota’s booth, called the Camatte Lab, is divided into two zones: a Tech Lab that lets visitors look at the inner workings of the car, and a hands-on Design Lab that allows visitors to easily customise a Camatte.

Tech Lab
The Camatte57s – first revealed at the 2013 Tokyo Toy Show – will be displayed without its body panels, to allow viewing of the steering gear and differential gear box. Visitors can easily see the internal parts moving when the steering wheel and accelerator are operated, making it easy to understand how these parts work.

Design lab
The Camatte57s Sport – revealed alongside the Camatte57s last year – will be displayed with LEDs on the bonnet. Visitors can customise the vehicle by displaying their own digital drawings on the LEDs.