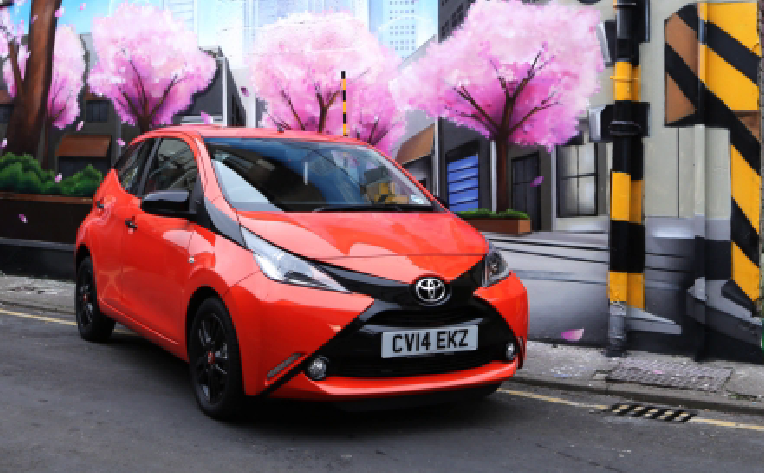 The new Toyota Aygo has established itself as the city car of choice for those who want to combine a fun driving experience and look with penny-pinching running costs.

The idea of fun forms the basis for our latest Aygo-based project. We challenged a number of short film makers, whose work is predominantly confined to the six-second film app ‘Vine’, to come up with shorts that capture the Aygo’s essence of fun.

The first of these Toyota Aygo Vines is from vineographer Gwri Pennar, from Swansea. A professional creative producer, Gwri’s first film – of two – is entitled ‘Illusion’ and sees a Twist Orange Aygo x-cite appear to emerge like spray paint from a can, in front of a gorgeous subterranean cityscape characterised by rows of pink blossom trees.

We asked Gwri what it is about the Aygo that inspired his visual treatment; “The boldness of the Aygo’s design was an inspiration when creating this Vine as were the manga elements that are distilled within the car (such as the bright colour palette and X-shaped grille).”

Artistically complex Vines such as Gwri’s require much more than an iPhone to perfect, so how does he do it?

“Generally my approach is to storyboard the concepts, design the work and test the ideas before taking the plunge and shooting. Equally post-production is a challenge because all of my work uses a combination of stop-motion and time-lapse, which means it takes a considerable amount of editing especially when it involves full size products outside of a studio environment. The street art vine (Illusion) was actually filmed over 5 days, so making that fit in a snappy creative 6 second Vine was a fun challenge.”

Finally, what equipment is required to create Vines such as this one? “Production and tech-wise; I used a variety of tools combined,” Gwri explains. “In addition to two iPhones, I also use a DSLR camera with 24mm lens mounted to a Manfrotto tripod. For this work I did not use any artificial light. Software-wise, Dragon Frame and Stopmotion Pro were used for post-production work, as well as Adobe’s software suite, Creative Cloud.”

Gwri added: “A special thanks must go to the artist James Burgess from Swansea who I collaborated with to do the graffiti work for this Vine.”

Keep an eye out for more Vines from Gwri and other film makers in the coming weeks. In the meantime let us know what you think in the comments section below.