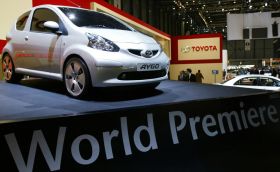 They say time flies when you’re having fun, but can it really be nine years ago that the Toyota Aygo burst on the scene in production form at the 2005 Geneva Motor Show?

As one of the stand-out cars of the event, Aygo arrived with quite a fanfare. Toyota had invited talented European graphic designers to express their views on urban dynamism by decorating the bodywork. Meanwhile, showgoers were treated to booming musical accompaniment coming from the novel Aygo DJ concept.

The smallest Toyota ever launched in Europe, Aygo stretched the equivalent of three-and-a-half skateboards in length but marked the culmination of a three-year research and development programme and a sizeable total investment cost of £1 billion.

On its official arrival on 1 July 2005, Aygo stormed Europe’s urban environments with its sharp style, enjoyable driving dynamics, cheap running costs and environmental qualities – all wrapped up in the great quality and reliability that are hallmarks of the Toyota brand.

The new city car reset standards within the industry, too. Not only was its new three-cylinder 1.0-litre VVT-i the world’s lightest production car engine, but it delivered class-leading power and torque figures. Its combined fuel consumption was class-best and its emissions put it in the lowest possible tax band. In addition, the engine won its category in the International Engine of the Year award four years running, from 2007 to 2010.

Cleverly constructed, Aygo weighed less than a Lotus Elise but was able to comfortably seat four adults. It offered a full complement of active and passive safety features, such as the inclusion of the latest generation Bosch ABS, electronic brake force distribution and seatbelt pretensioners; all of which meant that Aygo stood in the lowest possible insurance group.

Even towards the end of its production cycle and in the presence of many newer rivals in the city car market, appeal of the first-generation Aygo has remained undiminished. Remarkably, 2013 was the model’s best ever year of sales.

Aygo has set the bar very high within the city car class. But if any car can take that baton and run with it into the future, the all-new second-generation Aygo is the vehicle for the job.