Last week we were looking at hybrid cars, and how they aren’t all born equal. Since the first-generation Prius appeared in Japan – back in 1997 – Toyota’s hybrid has established itself as something of a leader. But how does the third-generation car – which comes to the UK this summer – improve on the last? 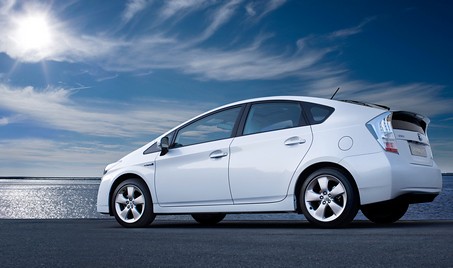 The Prius’ most advanced feature is its sophisticated powertrain. The second-generation Prius’ Hybrid Synergy Drive may have won 2004 International Engine of the Year – and most fuel efficient Engine of the Year for the last five years running – but that hasn’t held Toyota back from dramatically improving it. The next Prius’ engine is more than 90% new. It’s lighter and more compact, even though its capacity has increased from 1.5 to 1.8 litres.

With a bigger engine, the next Prius is more powerful – with 22% more total horsepower (134bhp compared to 109bhp). It’s as fast as a conventional 2.0 litre family car, too, reaching 62mph in just 10.4 seconds. You might expect fuel economy to have suffered, but the next Prius is 10% more efficient during motorway cruising, and its combined fuel consumption is 10% better – an incredible 72.4mpg from a full-sized family car. With CO2 emissions of just 89g/km, the next Prius falls into road tax band A – currently free.

It’s not just the petrol engine that’s been improved for the next Prius, either. The car’s new electric motor is a third smaller than the one used in the current Prius, but it’s 20% more powerful, producing 80bhp on its own. The inverter – which turns stored electricity into 650-volt alternating current for the motor – is more than a third lighter and smaller, while the higher capacity battery pack has improved cooling.

These are just some of the improvements to the powertrain in the next Prius, but the car is full of innovations, improvements and new features. Over the next few weeks we’ll be looking at more of them.