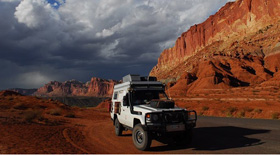 Swiss husband and wife Paul and Brigitta Bohlen Jüni have always had a taste for travel and adventure. After meeting in the Caribbean, the couple toured Australia together and later married in Namibia. For their honeymoon, Paul and Brigitta chose to partake in a 4×4 adventure across South America, which they rounded off by sailing to the Antarctic on a Russian icebreaker.

Returning home, Paul and Brigitta found themselves asking “What next?”, so the couple took the bold decision to circumnavigate the world – in the legendarily dependable Toyota Land Cruiser HZJ78.

Across their epic voyage, the couple would take in 63 countries and an astonishing 280,000 kilometres.

After three years of planning, their world tour started from Switzerland on 3rd September 2006, and within a month they had been through two continents. Taking in France, Spain and Portugal, the couple took a rest on completion of this stage of the journey with a month long stay in Morocco.

From here, Paul and Brigitta journeyed to South America. A 20-foot-long shipping container was used throughout the couple’s trip, in order to make transfers easier and keep costs down. When the Land Cruiser, nicknamed ‘Mahangu’ by the couple after a type of South African sweetcorn, arrived in Brazil, the couple had been travelling for a mere three months, but their adventure went on to last almost seven  years – taking in some of the harshest conditions on the planet.

Finally, on September 21 2013, the plucky pair crossed the Rhine River and completed their circumnavigation of the globe, after 2573 days. With the diesel rumble of their dependable Land Cruiser still going strong until the end, a letter the couple sent to Toyota Europe midway through their trip said it all: “The Land Cruiser is the best car you can drive around the world.”

If you’ve got a sense of adventure and would like to test drive a Land Cruiser, leave a comment below and we’ll get back to you shortly.

Find out more about their trip here