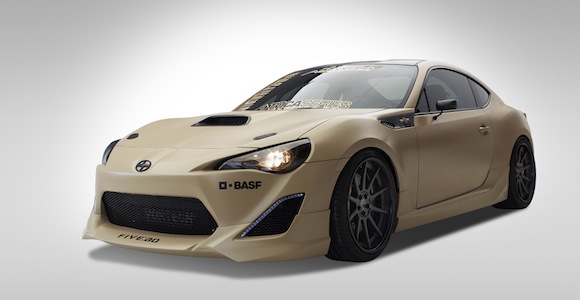 How would you like to be given a Toyota GT86, a $15,000 budget, and three months to build your own custom-designed version of the car? That’s exactly what happened to three lucky car customisers in the United States, who each created a tuned Scion FR-S as part of a special challenge ahead of this week’s SEMA show in Las Vegas.

Sold in the US as the Scion FR-S, the Toyota GT86 is fast becoming a favourite of car modders as well as the motoring press, and these spectacular cars from Daniel Song (above), Chris Basselgia and John Toca show exactly what can be achieved if you want to take the bespoke route.

First up is Chris Basselgia’s ‘Minty FReSh’ tuned Scion FR-S. There’s no doubt that the mint green paintwork and extremely low stance make it stand out, but the supercharger under the bonnet, the vintage-style interior and high-end sound system give it power and head-turning ability too.

The powertrain modifications of Daniel Song’s race car-inspired FR-S are still to be announced, but the car goes without an audio set-up, and instead goes for a gutted, performance-oriented look inside. The exterior is covered in a carbon fiber wrap, and was fitted with a custom wide bodykit and large rear spoiler to finish off the track-ready look.

The winner of the FR-S Tuner Challenge will be announced at SEMA later this week. Which would you pick?

You can find out more about the three finalists in these videos, or read more on the Scion Blog.