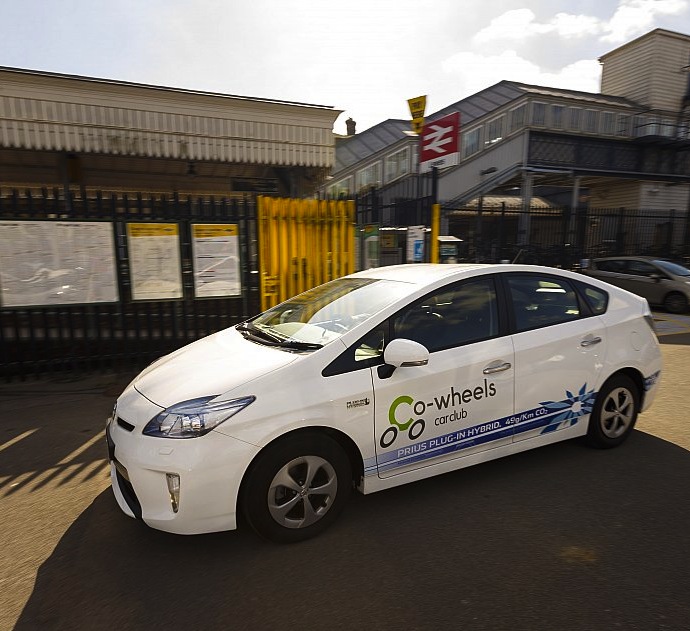 Toyota has provided a Prius Plug-in for a new transport initiative giving rail travellers access to a low emissions car club vehicle for the next leg of their journey.

The scheme gives holders of train operator Southern’s new smartcard – the key – access to the Prius Plug-in at Lewes railway station in Sussex. The car is operated by the Co-wheels car club, and makes use of a new electric vehicle charging point installed at the station.

Key holders are being offered discounted club membership, enabling them to use their smartcard to open up the Prius Plug-in and drive away. It is the first time the club has located a hybrid vehicle at a railway station and the project will run as a three-month trial.

Using a Prius Plug-in will help travellers reduce their carbon footprint — for those making local onward journeys from Lewes, Prius Plug-in has the potential to run entirely on its electric charge, with zero tailpipe emissions and zero fuel consumption. Anyone making a longer trip needn’t worry about running out of charge, as the Toyota will automatically switch to its hybrid system’s petrol engine as soon as electric power runs low.

The scheme was formally launched last week (Sept 20th) by Norman Baker, who is both Rail Minister and the MP for Lewes. He said: “This is an excellent scheme that offers greener transport through the use of both low emission vehicles and car sharing. I am sure that projects like this and those will inevitably follow will benefit local residents whilst preserving the wider natural environment.”

Stuart Ferma, Manager Toyota Fleet Sales, said: “This initiative promises to demonstrate the key qualities of Prius Plug-in and Toyota’s world-leading hybrid technology. It’s a best-of-both-worlds solution that is kinder to the environment without demanding compromises from the motorist.”

Riz Wahid, Southern’s Head of Retail Development, added: “One of our abiding aims is to encourage people to travel to and from our stations in a more sustainable way. Now that the card is here, it makes complete sense for our passengers to be able to use their key card to travel on our services and to drive away one of the greenest cars on the planet.”

Co-wheels Director Pierre Fox said: ”It is very exciting for the club to be involved as a partner in this innovative project. Residents, visitors and businesses in Lewes will be able to benefit from an integrated system for accessing travel options. Travellers can buy a train ticket that also gives access to a plugged-in hybrid car at the station. It is hoped that the model will be extended across the region to create a significant impact.”