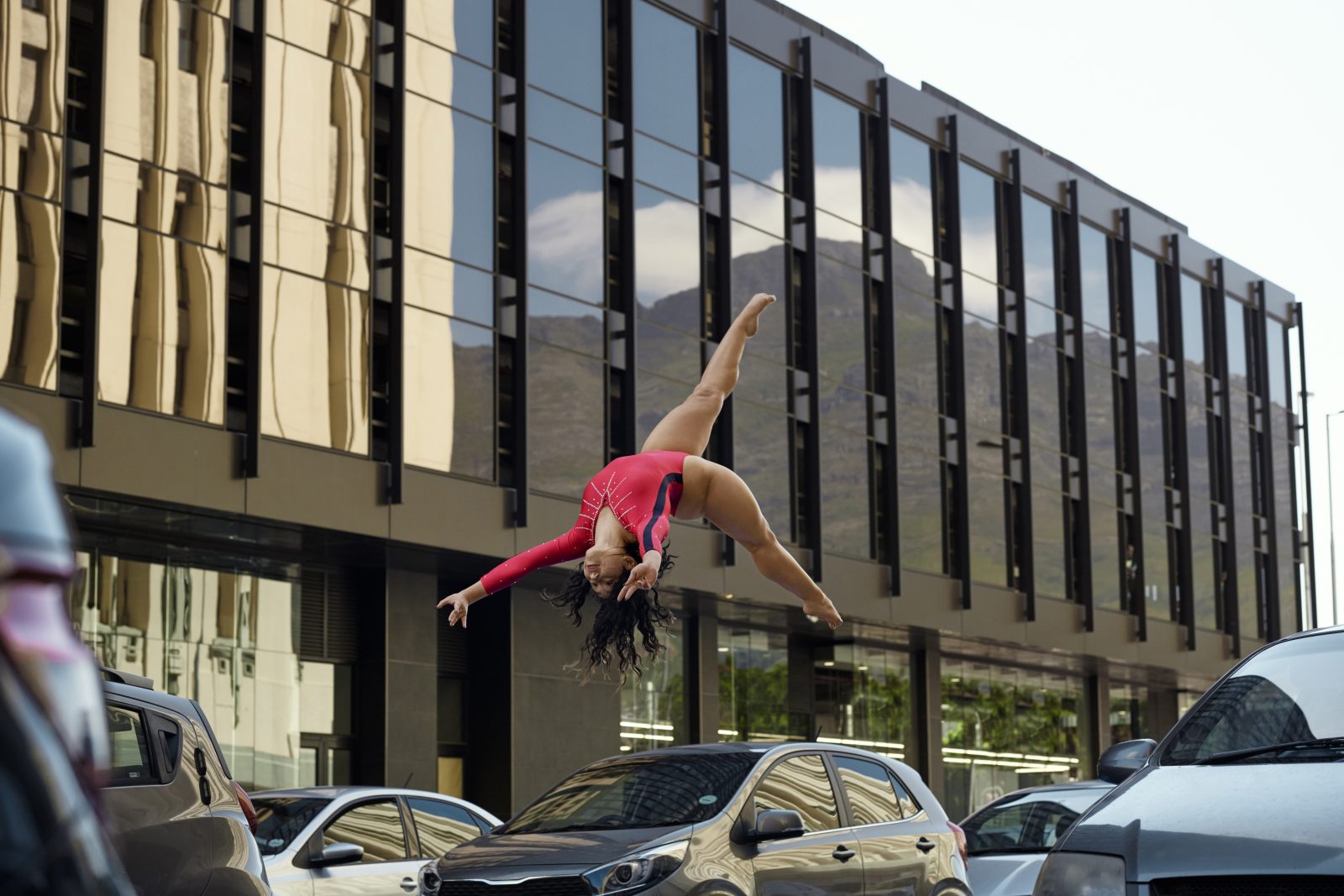 The latest advert for the all-new Yaris Hybrid was broadcast for the first time on television on the evening of Saturday 5 September 2020. Starring our new supermini resplendent in its Tokyo Fusion Bi-tone colour scheme, the new Yaris TV advert also includes a spectacular performance from gymnast Katelyn Ohashi, somersaulting along a city street through the traffic. Many of you have been asking us, ‘Who is the Toyota gymnast?’, so here is some more information.

We asked Jonny Ratcliffe, Account Director at The&Partnership, Toyota’s creative agency, to explain the background to the advert and how the production crew shut down a busy Cape Town street to conduct the filming.

Who is the star of the new Yaris TV advert and why is she famous?

Jonny Ratcliffe: “Katelyn Ohashi takes the lead role. Katelyn is a world-renowned gymnast, specialising in floor routines. Once an Olympic hopeful, Katelyn became the victim of injuries and body shaming in her teens. Not wanting to give up on her love for the sport, her relentless drive and enthusiasm saw her joining University of California, Los Angeles (UCLA).

“During the Collegiate Challenge against California, Michigan State and UC Davis in 2019, Katelyn was defending National Collegiate Athletic Association (NCAA) Floor Exercise Champion and broke the Internet when her routine landed a perfect score of 10.0. The video of her performance has since amassed almost 100,000,000 views on YouTube.”

What is the storyline of the new Yaris TV advert?

JR: “In ‘Why Stop?’ we see Katelyn move effortlessly through lines of city traffic; throwing her body from one awe-inspiring tumble into another, finally revealing that she is, in fact, a physical metaphor for the Toyota Yaris. Her energy, focus, and perfectionism are the embodiment of the Yaris’ regenerative hybrid powertrain.”

How is the story connected to the philosophy behind new Yaris?

JR: “The new Yaris hybrid is the car with the energy to keep going. In fact, Toyota’s spirit of continuous improvement helped define its new shape, new tech, and better performance. They simply never ever stopped. Marry that with a hybrid powertrain that’s always fully charged and an audience with a zest for life, it only felt right that all our comms activities were delivered with the same energetic, inexhaustible, never stopping, charged, ready-to-go spirit.

“Katelyn was felt to be the perfect embodiment of the new Yaris hybrid’s unstoppable energy. The challenge was how to put her routine with all its thrilling energy on the road.”

Who came up with the creative concept for the new Yaris TV advert?

JR: “The creative idea was defined by Phil Beaumont, Creative Director at The&Partnership Europe. The idea was realised with the help of Independent Films and director Philippe Andre.”

Where was the new Yaris advert filmed; which street is featured; when was it filmed?

JR: “The TVC was shot in Cape Town, South Africa, in December 2019. The main scenes were shot on one of Cape Town’s busy central boulevards, Riebeek St, however driving footage was also captured in other areas of the city.”

What were the challenges of filming the new Yaris TV advert?

JR: “The production challenge was vast. Shot over five days, the production house, Independent Films, closed off Riebeek St and dressed all its five blocks, with a comprehensive art department creating fully functioning barbers, bakers and fashion boutiques to give the setting an appropriately European cosmopolitan feel.

“The stage set, Independent’s Philippe Andre teamed up with DOP Ottar Gudnason, shooting on a mixture of Sony Venice and Phantom cameras to capture the complex choreographed gymnastics routine. This required pre-production planning on a level similar to that of a feature film.”

What is the music in the new Yaris TV advert?

JR: “Out of the Sky by Random Recipe.”

Discover more about the all-new Yaris Hybrid by clicking here.

Learn more about the all-new Yaris: