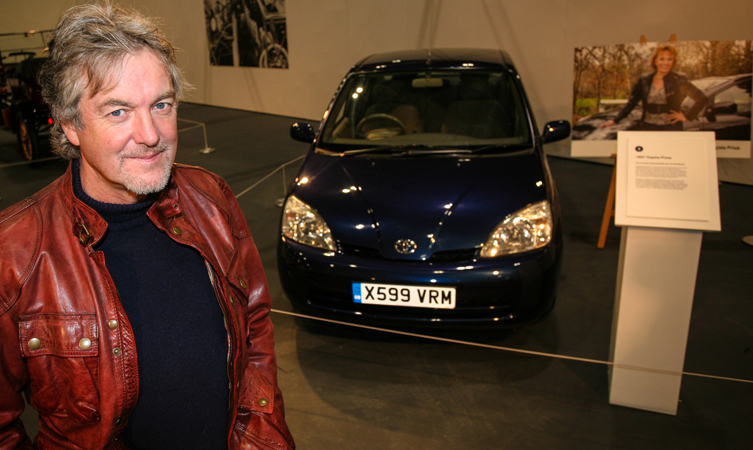 Top Gear presenter James May has named the Toyota Prius one of the Cars that Changed the World at the 2015 London Classic Car Show.

May says the original 1997 Prius is one of the clear choices for the accolade, describing it as “the first successful mass-market attempt at rethinking the basic workings of the car.”

The Prius was the first hybrid car to be universally embraced rather than merely championed by eccentrics and evangelical engineering lecturers.

Now on display at the James May’s Cars that Changed the World exhibit at the London Classic Car Show, the Prius is among rarefied company within the ‘Hall of Obviousness’ section of the presenter’s 13-car selection – sitting alongside the likes of the Austin Mini, Model T Ford, Volkswagen Beetle, Benz Patent Motorwagon, and the Ford Mustang.

May says: “The Hall of Obviousness is exactly that, significant cars that most people would expect to be on a list of cars that changed the world.”

His reasoning for including the Prius in the display states the Prius was the first hybrid car to be ‘universally embraced rather than merely championed by eccentrics and evangelical engineering lecturers.’

More surprising choices are to be found in the ‘Corridors of Bloody-Mindedness’ section (yes that’s the real name). They include the 1901 Waverley Electric car, the 1906 Cadillac Model K, the bare-bones 1933 Standard Superior, the 1972 Honda Civic, the 1980 Lada Riva, and the autonomous, self-sustaining 2009 Bruno ExoMars Rover.

There’s also a secret ’13th car’ that May has named his personal Car of the Century – we won’t spoil the surprise here, but you can click here to find out what it is.

The London Classic Car Show, based at the Excel exhibition centre in London’s Docklands, was open from Friday, 8 January to Sunday, 11 January 2015.

The show also included displays curated by Adrian Newey and James Martin, as well as a Grand Avenue where some of the world’s most special classic cars were paraded.