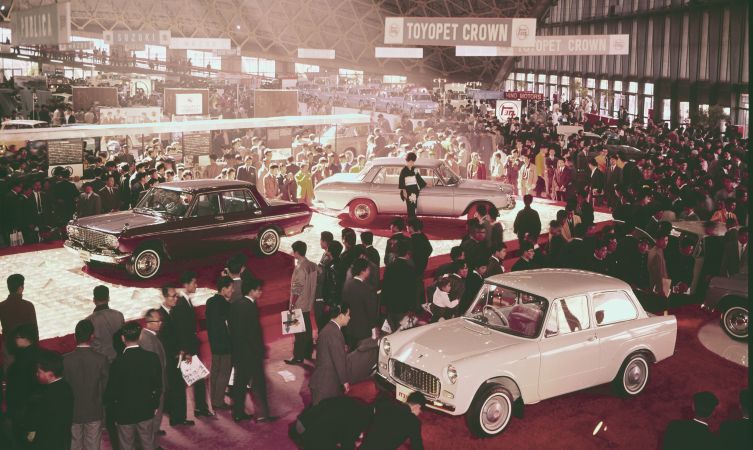 To build anticipation for that event, we are going to publish four decade-sized posts that explain which important new models, ideas and concept vehicles Toyota revealed at each show. This post looks at the first ten shows, covering the years 1954-1963.

The Motor Exposition that had regularly been organised by the Nikkan Jidosha Shimbun newspaper until 1953 was discontinued. It was reborn the following year as the Zen-Nihon Jidosha show – literally translated as the All-Japan Motor Show but officially called the Tokyo Motor Show in English. Of the 267 vehicles exhibited at this inaugural show, only 17 were passenger cars – a proportion that attests to the high demand for commercial vehicles at the time.

The age of Japanese-made passenger cars was heralded with the introduction of the Toyopet Crown, while the commercial sector was shifting from its early preference for three-wheel cargo vehicles to traditional four-wheel trucks in a variety of sizes.

Following the request by Japan’s Ministry of International Trade and Industry for manufacturers to create ‘people’s car’ concepts, the 3rd Tokyo Motor Show further shifted the attention of visitors from commercial vehicles to passenger cars. In order to highlight this bias, the organisers decided to group the vehicles by category rather than by manufacturer.

Now in its fourth year, the annual show had become a vibrant sales opportunity for manufacturers rather than merely an exhibition. The organisers therefore created a special Automobile Information zone to assist visitors in their purchasing.

There was a visible increase in the number of overseas visitors this year, most likely a reflection of the start of Japanese passenger car exports to the United States earlier in the year. Further changes included a switch from the Hibiya Park venue to the Korakuen Velodrome (now replaced by the Tokyo Dome), which also necessitated a date shift from spring to autumn.

This year Toyota exhibited a small, high-speed diesel engine that had the potential to create new possibilities within the passenger car market. Following the success of last year’s partially covered venue, the show was moved to the Harumi Fairgrounds (now Tokyo Big Sight) to become an entirely indoor event.

Noticeable improvements were felt within the Japanese automobile industry with the introduction of liberal trade and foreign exchange policies. While the Tokyo Motor Show remained an all-Japan event, it was now joined by a separate imported car show.

As a reflection of the improving economic climate, this year’s show focused strongly on motorisation for the masses with many manufacturers exhibiting passenger cars with sub-one-litre engines. For those already on four wheels, there was a notable push towards sports cars – as exemplified by the Toyopet Sports X concept (below).

Public interest in automobiles continued to be on the rise in Japan, reflected in the number of visitors to the Tokyo Motor Show exceeding one million for the first time. Sports cars and convertible models were particularly popular this year, while the short two-year distance to the implementation of the liberal trade deal further stirred enthusiasm among exhibitors.

Following a couple of years with the attention drawn to sports cars, the focus of this year’s show returned to traditional passenger cars. Toyota exhibited the Crown Eight, the first Japanese car equipped with a Japanese-made V8 engine, along with convertible models of the Crown, Corona and Publica to demonstrate harmony between luxury and sportiness.