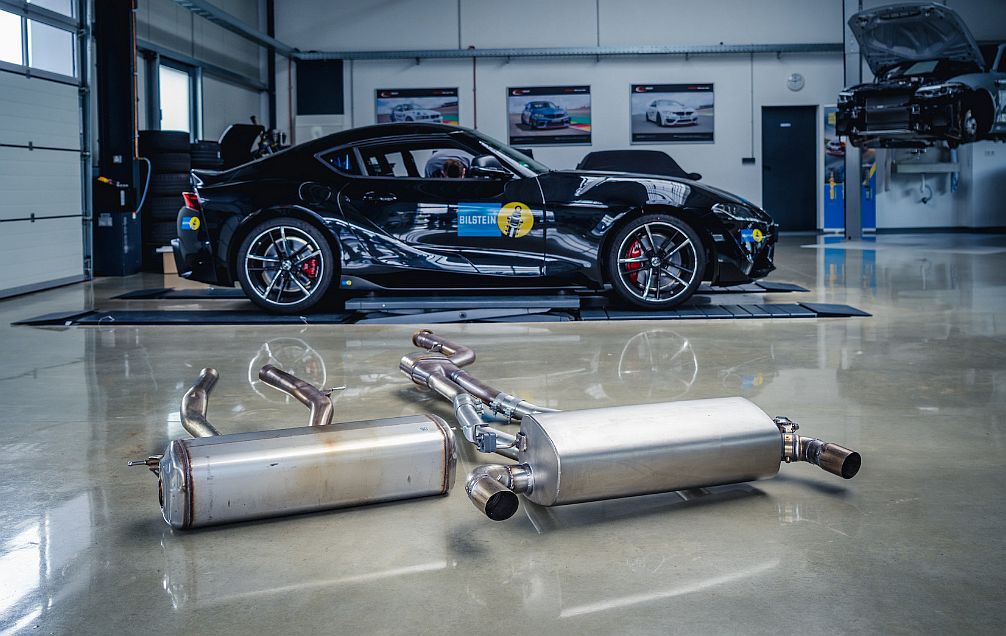 Knowing that the production Toyota GR Supra forms the basis of the GT4 competition model has given aftermarket tuning specialists like Bilstein plenty of inspiration for offering track day upgrades for customers’ road cars.

World-renowned German suspension manufacturer Bilstein is one such company that has taken on the challenge of optimising the GR Supra for track work, not to mention embarrassing the Munich-, Ingolstadt- and Stuttgart-developed establishment on the road. And with valuable support from associates in the wider aftermarket community, it is in the process of publishing a six-part build diary to offer an insight into the process.

Here at the Toyota UK magazine we’re partial to modified Toyotas, so we’ve decided to tag along for the journey and suggest you do, too. A brief overview of the steps published so far is included below, and it is possible to learn more about each stage by clicking the emboldened links to read the full article on the Bilstein website.

After experiencing its starring role at the 2019 SEMA tuning extravaganza, the fifth-generation Supra left a lasting impression on Bilstein engineers. Its perfect 50:50 weight distribution between a turbocharged straight six up front and the driven rear wheels made it a classic sports car. But they also knew that those same ingredients offered oodles of potential for further optimisation.

This article introduces us to Bilstein’s own metallic black development vehicle and lays out the progressive steps ahead. It also reveals why the company’s product managers were unanimous in their decision to choose the GR Supra for this high-profile project.

Stage one: safety and interior tuning

As this project was always destined for prolonged track use, Bilstein began the modifying process by prioritising safety. Although the GT4 specification GR Supra has a stripped-out interior and weld-in roll-cage, Bilstein’s engineers wanted to retain as many comforts as possible while enhancing the safety of the overall bodyshell.

A reinforced Wiechers-Sport roll-cage was bolted in to existing mounting points to enhance the vehicle’s strength around the B-pillars. This eye-catching, multi-point construction is designed to protect occupants from injury in the event of a rollover, but it also provides a solid platform from which to anchor a set of Schroth racing harnesses.

New manually adjustable Recaro recliners were installed in place of the original electrically adjustable leather seats. This switchover offered a number of benefits, including a substantial weight saving (20kg per seat), a lower seating position for improved centre of gravity, and greater lateral support. Finally, a novel upgrade from Neidfaktor transformed the top third of the steering wheel into a sequentially illuminating LED rev counter so it is no longer necessary to look down at the tachometer to time gear shifts.

Although a more significant power upgrade is planned in the next stage, Bilstein wanted to first ensure the engine had sufficient capacity to handle increased volumes of spent exhaust gases.

The standard exhaust is designed to create a degree of back pressure to help regulate flow within the system. But in order to optimise engine power for track use, exhaust gases need to be evacuated as quickly and efficiently as possible. So a new free-flowing HJS downpipe and Lightweight Performance stainless steel exhaust system were installed, the effect of which was a significant 20bhp increase in power at the top end and up to 25Nm more torque across the entire rev range.

Reducing the unsprung weight of a vehicle (anything not supported by the suspension) has a similar effect of heightening a vehicle’s responsiveness. This is why Bilstein decided to reduce the size of the GR Supra’s rolling stock from its standard 19-inch alloys to lightweight 18-inch Protrack Motorsport wheels. An additional benefit is that a greater number of tyre options now become available, with a set of semi-slick Yokohama A052s being the current track tyre of choice.

This stage begins by focusing on the opposite side of the engine’s breathing. A new carbon fibre Eventuri intake and engine cover not only look special but ensure an efficient passage for cool, oxygen-rich atmosphere to reach the compressor wheel of the turbo.

Similarly, the temperatures of powertrain fluids are kept in check with the addition of auxiliary CSF radiators to enhance the volume and performance of the cooling systems plumbed into the engine and transmission. Powertrains are exposed to prolonged high temperatures on track, so it is vital to maintain optimal operating temperatures in all conditions in order to extract the full performance of the vehicle.

Having addressed all of the engine’s ancillaries, work begins on giving its brains a Mensa makeover. Simon Performance is commissioned to rework the engine control unit (ECU), paying particular attention to the ignition and boost pressure maps and how these can be tuned to take account of the new breathing modifications. Turbo engines like that in the GR Supra respond particularly well to ECU tuning, which is proved true when the car is returned to the dyno and delivers a hefty 100+bhp increase.

Aftermarket tuning has released an additional 120PS out of the Toyota’s straight six engine, which now delivers 462.9PS and 626.4Nm of torque to the rear axle. But numbers do not tell the whole story of the GR Supra Bilstein’s enhanced soundtrack and straight-line performance.

Stage four is where the existing modifications begin to be appreciated, from the pops and crackles of the exhaust on the overrun to the blistering 7.87 seconds the GR Supra now takes to accelerate from 100-200km/h (62-124mph) – a popular test of real-world power within the tuning scene. Interestingly, our German friends reported that this performance is enough to embarrass a Mercedes-AMG C63 S, which is said to despatch the same sprint in 8.7 seconds.

In the next stage, the GR Supra is finally equipped with the Bilstein suspension it deserves to cope with the significantly increased engine power. We’ll update this article as soon as i