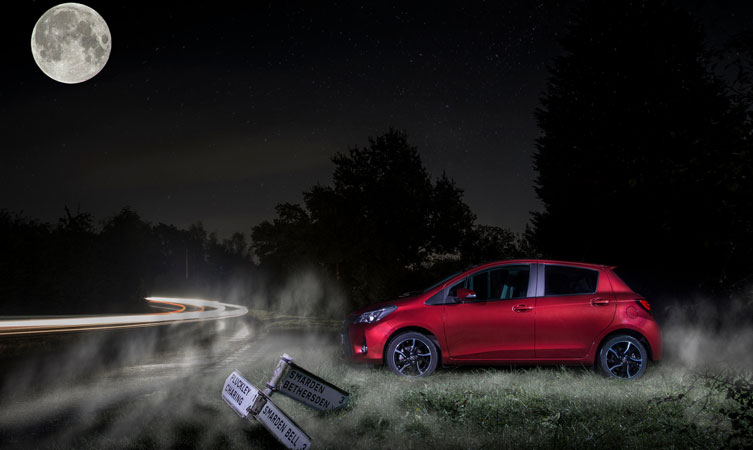 Halloween – the most ‘spooktacular’ night of the year – is almost upon us. To mark the occasion, we decided to partake in a spot of ghost-hunting with the spirited Toyota Yaris Sport. The setting for our fright night was the tiny village of Pluckley, near Ashford, in Kent.

In 1989, this tucked-away rural community entered the Guinness Book of World Records when it was named Britain’s most haunted village. Pluckley has a population of fewer than 1,500 living souls, but, as many as 16 different ghosts are said to have been spotted there.

We’ve scoured the village on the trail of six of the most famous ghosts that reside in Pluckley. Sceptics might want to take a close look at the resulting photos, as we think we might have captured one or two things that are no longer of this earth…

Our Yaris Sport is finished in Burning Red metallic paint; it’s a colour that fits well with the macabre story behind our first location. According to legend, a gypsy woman who burned to death in Pluckley is often seen wandering a bridge that’s surrounded by woodland. The woman is believed to have accidentally set fire to herself when a spark from her pipe ignited the liquor she was drinking.

A natural mist descends on the area surrounding the bridge where the gypsy woman is spotted, proving a good test for our Yaris Sport’s standard high and low beam projector headlights. The headlights include integrated tracer lights, and Yaris Sport models also feature bumper-mounted front fogs.

The old Pluckley Brickworks is home to one of the village’s most famous ghosts, the Screaming Man. Opened in 1877, the brickworks had a clay pit that contained the most easterly exposure of Upper Weald Clay – a sedimentary rock underlying areas of the South East.

The clay was to spell the end for worker Jay Smiths, who it’s reported was killed when a clay wall collapsed on top of him. His screams can still be heard coming from the old brickworks site.

According to locals in the Black Horse public house – also purported to be haunted – many people died at the works and reports of ghost sightings in the surrounding area are common.

The Red Lady is an apparition who frequents the churchyard of St. Nicholas’s Church in Pluckley. A member of the Dering family, who have a parliamentary connection  – Sir Edward Dering, 1st Baronet (1598–1644), was MP for Hythe and fought for Charles I during the Civil War – The Red Lady is said to have been buried in the church’s crypt, with a red rose.

If you’re a fan of the colour red, you’ll be interested to know that you can specify the Yaris Sport with a vibrant Piri Piri red interior trim pack. The pack includes door panels, front seat upholstery inserts and soft-touch instrument panel and is a no cost option.

The Miller of Pluckley

The Miller is said to appear moments before the start of a thunderstorm, on land next to a ruined windmill. The mill was closed by its last miller Richard ‘Dicky’ Buss in the 1930s and was destroyed by a fire in 1939 after it was struck by lightning one stormy night.

Equally the most intriguing and vaguest haunting tale, is that of the phantom monk who supposedly walks the lanes by Greystones, a house once known as Rectory Cottage.

Precious little is known about the holy spectre; there is no record of who he was, or why he continues to haunt the village. But it’s rumoured that he enjoyed a relationship with a woman who lived nearby at a dwelling called Rose Court.

The Highwayman supposedly hides in woodland beside ‘Fright Corner’ on the outskirts of the village. Legend has it that when the man – reported by TV show Most Haunted to be one-time resident Robert Du Bois – was alive, he would pounce on unsuspecting travelers from behind a tree and rob them.

Robert met a sticky end when he was accidentally killed by a stray hunting spear, and was pinned to the tree that he used to hide behind. Both Robert and the tree, which was cut down decades ago, have been spotted since his passing.

Incidentally, cornering is something Yaris is extremely adept at thanks to revised steering and a stiffer bodyshell last year.

The model boasts a more rigid upper and lower body structure, which offers a direct response to steering inputs. Front-end rigidity has been increased thanks to the use of a new windscreen bonding material and thicker dashboard bulkhead. Finally, central and rear body rigidity have also been increased, with 36 additional spot welds.

Further information about the Toyota Yaris range is available on the Toyota UK website. If you would like us to arrange a test drive for you, leave a comment below, and we’ll be in touch shortly.