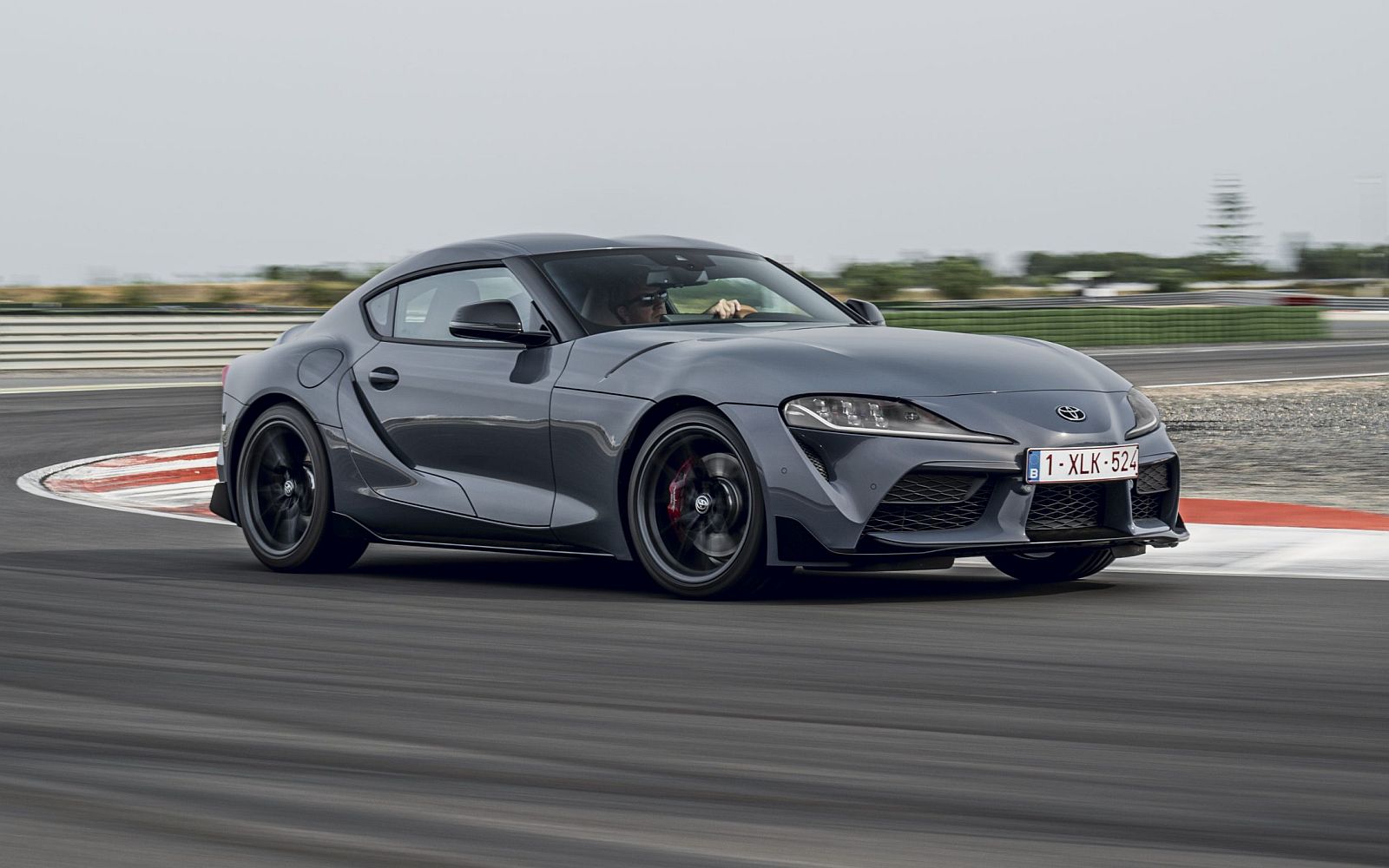 Selected UK motoring journalists were recently invited to get to grips with the eagerly anticipated new manual transmission GR Supra ahead of its arrival in the UK. Although the examples they tested were left-hand drive and the experience was limited to Monteblanco race circuit in Spain, what did they think of our new, more interactive coupe? Below is a selection of excerpts from their GR Supra Manual reviews, which include a numerical rating where applicable.

To read the full online first-drive reports, click on the emboldened links.

“The manual model… introduces three new colours, plus updates to the steering and suspension that are concurrently being rolled out on the existing two-pedal Supra. [These] extend to more rigid rubber used for the anti-roll bar bushes and dampers that have been retuned for better body control. The electrically assisted steering has also been retuned to weight up earlier and more naturally. The car feels taut, composed and seriously quick.

“To the new ’box. It’s unique to the GR Supra but assembled from existing ZF parts. It’s fluid, accurate… albeit with more weight in the understated and attractive lever. Moving quickly across the gates comes easily, with good inertia smoothing shifts. The weighting of the clutch and its sensitivity are also nicely judged. This new gearbox suits the Supra very well, and given we’re somewhat short on… manual performance coupés at the moment, that’s good. The manual ’box also saves 22kg and brings the Supra close to 1450kg.”

“The manual Toyota GR Supra is by far our favourite version of the car yet, providing the ingredient it always felt like it was missing with an excellent gear shift. Given how rare manual performance cars such as this are, we’re pleased Toyota took the plunge to deliver a more driver-focused option.

The odds were stacked against this car’s very existence, so the fact it made it to showrooms at all should be celebrated

“It helps that the manual’s shift action is very good. The bespoke Toyota/ZF unit slides into each gear with a wonderfully short and precise throw, giving off a real sense of mechanical connection. The lever feels and looks great. It’s a quality part and feels bang on in terms of its position on the revised centre console. The clutch action isn’t too long either, and the pedals are well spaced. There’s also a slick auto-blip feature that rev matches for you, which is easily disabled in the ‘Individual’ driving mode.”

“The Supra has an ‘intelligent’ software package (iMT) designed to react to a more assertive driving style by optimising engine torque on upshifts… and matching revs on downshifts. On firing up, iMT is set as the default but it can be switched out. Either way, fat gobs of torque are heading the way of the clutch, which has accordingly been equipped with a large friction area and strong diaphragm spring to take the strain.

“The new centre console [puts] the stubby gear lever and its 200g knob in exactly the right place with no danger of punching the air conditioning controls. Accelerating hard, the gearbox is a reliable ally, treating road-tester grade aggression and great slabs of torque with nary a flinch. Shift quality is robust and positive rather than slick and speedy but it isn’t sticky and it doesn’t baulk. The medium-weight clutch is all sweetness, too.”

“It’s not often that a manufacturer throws in a curveball mid-way through a car’s lifecycle. But that’s just what has happened with Toyota’s Supra. Due to overwhelming public demand, it has now equipped the Supra with a six-speed manual for a more involving driving experience. It’s no ‘off the shelf’ job, either. Toyota has created a dedicated gearbox… [using] existing parts from gearbox manufacturer ZF.

Like a re-mastered album, it’s got everything that you loved from before, but now more engrossing than ever.

“This is the one to go for if you really enjoy driving. The added feedback that you get… really does make it into a great enthusiast car. The action of the gearbox is very pleasant; the ‘gate’ itself is quite tight, but don’t rush things and it can be worked easily. Confident and smooth actions are rewarded with smooth shifts.”

“Bringing three pedals to the Supra isn’t just to win the hearts of a few luddites; it also shaves weight. A full 38kg if you also have lightweight fabric seats. They also drop your hips a centimetre lower, gifting taller drivers some vital headroom. Overall weight distribution remains a perfect 50/50.

If your heart’s set on a GR Supra, I heartily recommend you make it this one

“One place the weight saving has slowed is in the gear knob where, once again, Toyota’s ‘fun over financials’ ethos is brought vividly to life, the engineers swelling its weight… to make sure the shift action is as gratifying as possible. It also sits in a different position to the auto’s gear selector to give plentiful clearance from the climate controls as you punch from second to third. Your wrist and elbow feel exactly where they should be – a small but significant detail.”

“The shift is a peach: slick, weighted just-so and free from notchiness. The clutch pedal keeps up when you want to change in a hurry and it’s easy to heel-and-toe. The manual conversion has settled into Supra life beautifully. It’s also changed the car’s character: where there were once slurry-smooth upshifts, there’s now physical interaction and the jeopardy of hitting the redline.

“Obviously the manual’s going to be slower off the line and less frugal on the motorway with only six ratios instead of eight, but on first impression it’s had a personality transplant. Just as many plaudits are due to the team who’ve had nothing to do with the gearbox. The chemistry of the rubber used in the suspension has been changed. The adaptive suspension has been retuned. There’s new calibration for the… electric power steering. And even the traction control’s had a sense of humour upgrade.”

“It’s only available on the larger 3.0-litre engine and is visually identified by the red Supra badge mounted on the boot. You can have it with both Supra and higher-spec Supra Pro trim levels, but the GR Supra Manual is being viewed as the more driver-focused model in the range.

“We welcome the ability to shift gears yourself. It gives the sports car a level of interaction that’s becoming harder to find. In fact, we reckon the Manual is now the version to go for in the GR Supra range, helped by its lower price compared with the automatic.”