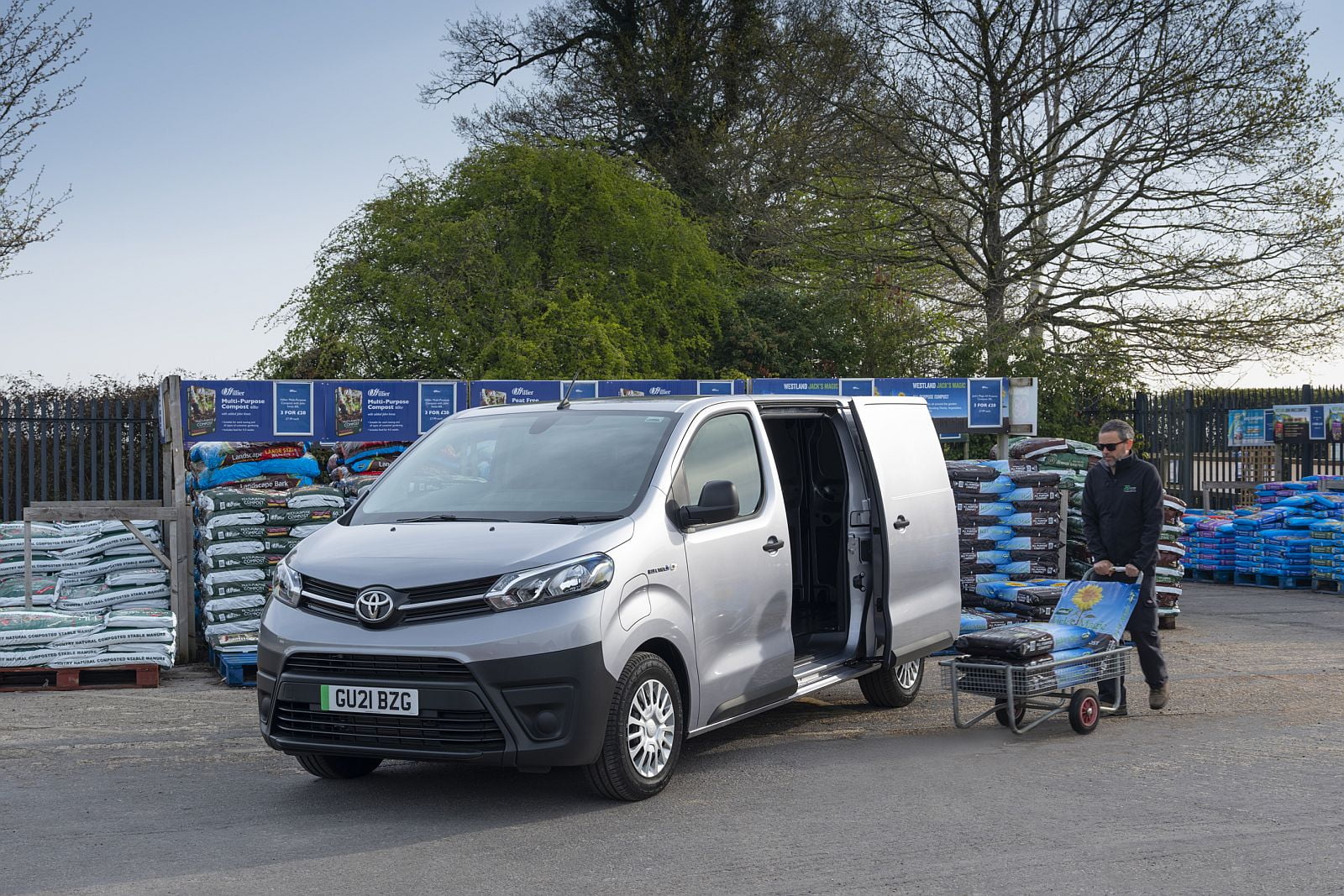 Full road test reviews of the new 2021 Toyota Proace Electric panel van have now been published. What did members of the motoring press think of our new all-electric commercial vehicle and how does it compare to the traditional diesel derivatives?

Below is a selection of excerpts from their assessments on UK roads. They are listed in alphabetical order and include a numerical rating where applicable. To read or watch the full online reports, click on the emboldened links.

“It’s one of the best electric vans for sale in the UK. Compared with a diesel… you could save up to £100 a month on fuel costs, while the van will be exempt from congestion charges and low-emissions zones tariffs. Three drive modes – Eco, Normal and Power – help you to manage energy use. Switching to Eco mode adds around 10 miles of range… while power mode offers the full 136bhp, but your range is reduced by around 10 miles.

“At low speeds there’s a discreet whirr while the van is moving. The electric handbrake releases automatically as you drive away (as long as you’re wearing your seatbelt), and is simple enough to re-engage when you come to a halt. The brakes are effective and the transition between energy recuperation into the battery and the conventional discs and pads feels natural.

“Overall the Proace Electric is a decent van to drive. It feels more car-like than some rivals, while the driving position is somewhere between an SUV and rival vans.”

“Toyota was the brand that took hybrid technology mainstream with the Prius, but its first fully electric vehicle to be offered on the UK market isn’t a car. Instead, it’s this Proace Electric van.

“[It’s] smoother than its diesel counterpart and offers a more relaxing and refined driving experience. The battery being mounted under the floor means that the van handles well and remains stable when cornering. There’s no impact on space in the rear, which offers 5.3 cubic metres of load volume [and] the maximum payload is one tonne.

“Overall, the Proace Electric… offers you a more refined and comfortable ride than the typical diesel light commercial vehicle. [It] is also well equipped and can be charged quickly if you have access to a fast enough charger.”

“It pulls well, thanks largely to the 260Nm of torque available, and the Proace Electric is ideally suited to urban work. The response available with maximum power means it is quick off the line and drives effortlessly – both the van and the person behind the wheel. The low-slung battery – placed in the floor of the van – means the Proace handles well for an LCV. It’s a good van to drive, and feels more like a car than many rivals in the same sector.

“The Proace Electric… has a very good driving range, and also comes with Toyota’s five year warranty. It’s only available in one size, but the choice of batteries makes flexibility a strength. It also confirms that for many cases, an electric van makes far more sense than a diesel one, particularly when you consider the savings available in running costs.”

“The Toyota Proace Electric joins the ranks of medium-sized electric vans we’re happy to thoroughly recommend. If you’re used to a rattly old diesel van, driving a modern electric van such as this… is going to be something of a revelation. This is a not a tiring vehicle to drive or be in at all. Rather, it’s punchy, quiet and impressively comfortable.

“While the Toyota offers only limited choice, the five-year warranty and strong levels of standard equipment mean that the Proace Electric is well worth investigating if its single body size fits your business – especially since Toyota has been actively investing to bring its van aftersales offering right up to speed with the best alternatives.”

“It’s very familiar; it feels like a home from home; and I’m a big fan. That smooth Toyota Proace ride is now even smoother, even more quiet. It’s also really compelling… it has a range of over 200 miles on a full charge… and I think it’s really good-looking. It doesn’t lose any of the Proace’s practicality… and it has one of the best loading bays on the market.

“The drive is smooth and controlled and effortless to drive – like driving the best automatic car you’ve ever driven. It just glides over the top of the road. And there’s not even much noise from the motor, the road or the tyres.”

“The interior is comfortable, functional and filled with tech. It’s filled with all the things that modern van users want… and the dashboard is phenomenal. You have to give Toyota credit: they understand what it means to simplify the offering to the point where it’s almost a no-brainer to pick it up. It provides a bit of a wake-up call to the rest of the electric van sector.”

“Because the electric motor delivers its power and torque instantaneously without the need for any gear changes, the Proace Electric feels more eager and capable than diesel equivalents. In fact it feels as fast as the most powerful Toyota Proace diesel (174bhp), while also benefiting from more stable handling thanks to the low-slung batteries. Towing… is something of a party piece for the Proace Electric – [it] can tow up to one tonne.”

“An electric van makes sense for only certain types of businesses, but this electrified version of Toyota’s popular Proace offers all the load-lugging capabilities of the diesel models but with lower running costs. If range and charging aren’t an issue for you then you could save a lot of money over the long run.

“In terms of doing its job the cabin of the Proace Electric is sensibly laid out and covered in hard-wearing and wipe clean materials. The bench seat holds three people and the seats are comfortable and supportive, and the switchgear is scratchy-feeling but clearly robust and durable.”