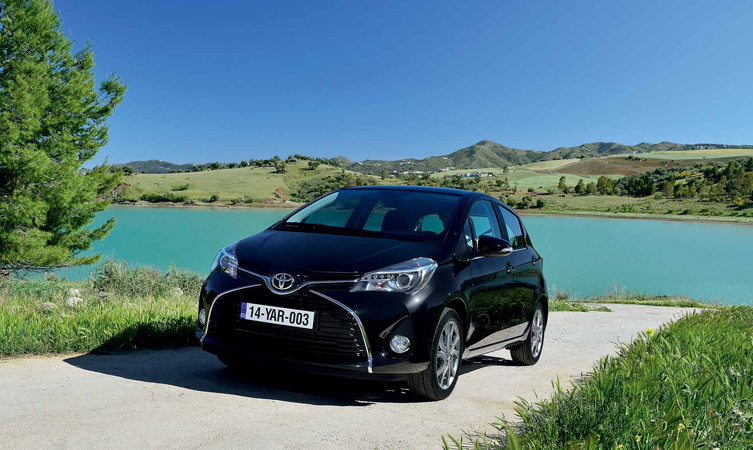 The looks and appeal of the new 2014 Toyota Yaris are crucial. Research conducted by Toyota confirmed that the key purchase consideration for European supermini customers is a car’s appearance; both the design and the sensory quality have to be just right.

For Alessandro Massimino, the Brussels-based product manager, the aim was clear: “Yaris already meets the essential requirements of supermini customers in its compactness relative to its roominess, its functional aspects and its innovative equipment, particularly its multimedia system and rear-view camera.

“Our surveys and the very positive response to the hybrid convinced us that we now had to move towards a more assertive style and increase the car’s overall dynamism, both in terms of design and driving pleasure.

“With this as our goal, we have worked closely with the design centre and R&D division to create the new 2014 Yaris.”

Exterior design
Elvio D’Aprile, who led the design programme, said: “The supermini segment is perhaps the most competitive in Europe. We had to do something which really stands out from the crowd, so our objectives were to avoid the B-segment stereotypes, to harmonise the overall style for all the powertrain derivatives and to dare to be different from the competition.”

The narrow upper and large trapezoidal grilles, a hallmark of Toyota’s current design, now merge at the point of the Toyota emblem to form a powerful cross shape. 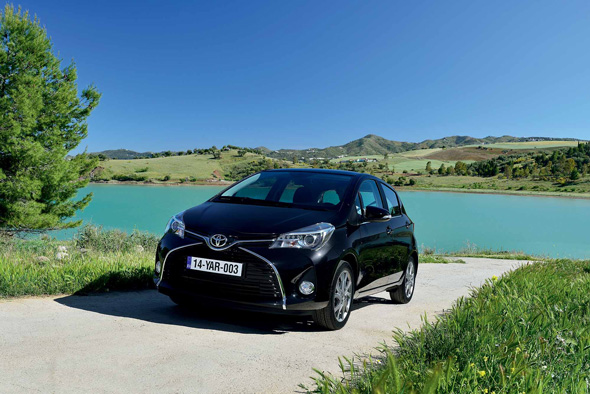 The emblem is underscored by a chrome trim bar which runs through the length of the upper grille into new headlamp clusters, tying the frontal elements together in a powerful, horizontal emphasis of the car’s width.

The headlamps themselves use new projector technology for high and low beams and the clusters incorporate LED daytime running lights.

The lower grille is underlined by a ‘floating’ spoiler and draws attention to the lower part of the car and its dynamic potential, ground-hugging stance and low centre of gravity.

At the rear, a new bumper design gives the appearance of a broad, lower stance, with an integral diffuser adding to the car’s more sporting, self-confident road presence.

The introduction of the new 2014 Yaris sees all versions – petrol, diesel and hybrid – sharing the same overall styling, with just a few subtle cues identifying each powertrain.

Elvio D’Aprile said: “The fact this project was managed entirely in Europe helped the final design enormously. We were able to hold daily discussions with engineering and product planning. Design elements that would normally have been rejected because they were incompatible with some preconception abut technical specifications, suddenly became negotiable. As a result were able to really carry our vision through from first proposals to the final car.”

Interior design
Pierre Romeo was in charge of the interior design for the new 2014 Yaris. He said: “The design is the result of three main objectives drawn from customer feedback. First, to enhance the feeling of roominess and dynamism in the cabin. Second to improve the sensory quality of the environment. And third, to combine an overall visual simplification with better colour variation and more sophisticated finishes.” 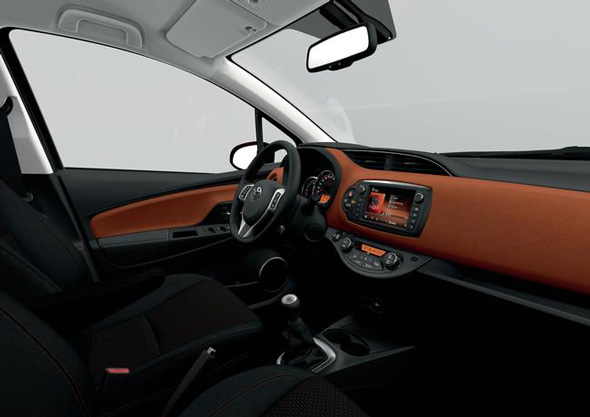 The upper instrument panel has been made thinner, giving the dashboard a stronger horizontal line, and the upper surface of the driver’s instrument binnacle has been restyled to give a slimmer appearance. In conjunction with these changes, the door panel has also been redesigned with a more fluid look, a larger soft-touch area and greater functionality.

The centre console has been raised by 23mm so that the length of the gear lever can be reduced by 30mm, improving the ergonomics of gear changes. A closed storage area has also been added to the console.

Adopting the new Toyota Touch 2 multimedia systems has brought an increase in the size of the central touchscreen from 6.1 to seven inches, adding more visual emphasis to one of the features that sets Yaris apart.

The upper instrument panel has a new grain effect that has a better tactile quality and less glossy appearance. It is complemented by a thicker trim band.

Yaris’s trademark sculpted central dashboard panel has gained thicker soft padding and its surface is now made of PVC. Different graining patterns – Animal, Technical or Geometrical – are used according to model grade.

Around the cabin the soft-touch finishes cover a greater area. Throughout, the previous bright chrome trim has been replaced by a satin finish that gives a more modern and sophisticated appearance.

All-new seat trims are provided, with a new fabric pattern and colour for each grade. The differentiation between the grades has been strengthened with the addition of new interior colour schemes, with red, tan and black joining the established grey and dark grey.