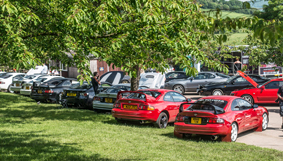 The era of Toyota’s dominance in the World Rally Championship was recalled on Sunday (1 June) when the GT-Four Owners’ Club marked the 20th anniversary of the ST205 Toyota Celica GT-Four,the last in a great line of competition-bred four-wheel-drive sportscars.

Around 50 cars gathered at the Prescott Speed Hill Climb in Gloucestershire and took the opportunity to demonstrate the Celica’s turn of speed and handling on the challenging course. Versions of the ST205, based on the sixth-generation Celica, were joined by the earlier ST165 and ST185 GT-Four models.

The ST205 was a true competition-bred car, developed with help from Toyota Team Europe, then reigning World Rally Champions. The Celica’s 2.0-litre four-cylinder twin-cam 16 valve engine was substantially modified with a larger, water intercooled turbocharger and reworked valves and ports, increasing maximum power to 239bhp. With permanent four-wheel drive, it could accelerate from nought to 62mph in 6.1 seconds and reach a top speed of 153mph.

It proved a winner at the highest level, driven by Didier Auriol to Toyota’s third successive WRC manufacturer’s title.

Toyota helped the UK owners’ club celebrate with a guest appearance from the Lexus LFA, a giant cake and commemorative GT-Four stickers. A prize draw for passenger rides up the hill climb in the LFA raised £400 for charity.

Ferdy Gottschall, club committee member said: “We would like to thank Toyota for its support. It’s not every manufacturer who would support a bunch of die-hard enthusiasts, but its contribution to the event was fantastic, not least bringing the LFA and giving members the chance of a once-in-a-lifetime passenger ride.”