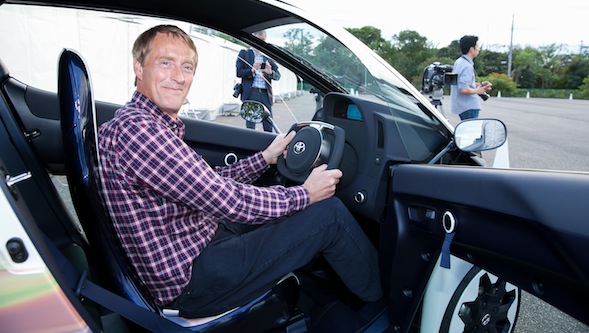 “So that’s why everyone comes back with a smile on their face,” said the Toyota translator as she pulled up in the i-Road tilting-trike concept after begging a short drive.

If you thought the appearance of this space-age tandem two seater was pretty wacky when it first appeared at the Geneva Motor Show last March, let me tell you, the driving experience is equally out of this world.

It’s also more fun than it has a right to be, our translator completely nailed it. No one climbs out of i-Road without a silly grin on their visog, although rear passengers tend to have a slightly horrified look. As for chief engineer Akihiro Yanaka’s idea of selling the idea of swooping around town in one of these to pensioners, well it would have to be a super granny who put her shopping basket into an i-Road.

Designed in house by Koji Fujita with its tilting battery-electric driveline engineered by a team under Yanaka, the i-Road is an urban runabout concept.

The motor industry has a long history of both three wheels going back to the earliest Morgan trikes and tilting bodies going back to the Thirties and more recently with a series of Mercedes-Benz concepts the 1997 Lifejet and 2002 Carving and BMW’s tilting tricycle eco concepts. As with the 1970s Advanced Passenger Train or more recent Pendolino trains, tilting a car’s body allows it to cope with more horizontal force so you can corner faster and more safely.

What Kanaka and his team have done, is link these two seemingly implausible ideas with Toyota’s fascination with personal transportation going back to the Walking iPooh from the 1998 Ideas Olympics, the 2003 PM concept and the i-Unit, exoskeleton concept displayed in the Toyota pavilion at the Expo 2005 in Aichi, Japan.

“We started thinking of compact dimensions; a narrow, short wheelbase vehicle,” says Kanaka. “Three wheels came from that, but they would mean it [i-ROAD] might turn over easily, so we developed an active leaning system to keep it stable.”

It’s that leaning system that makes i-ROAD such an appealing thing to look at and drive. It’s also deceptively simple, with series of rods attached to the suspension of each 16-inch diameter front wheel and linked together via a horizontal crank, which can be moved via an electric motor to lean the i-ROAD into corners like a skier. The tilting mechanism is linked with the steering and the amount of rear-wheel steer to maintain stability – basically it steers more the slower you go. Yanaka admits it was a long process of development and that further work will be required.

Narrow width and manoeuvrability are the main features. Just 850mm wide, the i-ROAD sits between a scooter and a large motorbike, with all the inner-city agility that implies. A 1,760mm wheelbase and a steerable 10-inch diameter single rear wheel means it turns on drain cover and at 2,350mm long, you can fit four i-ROADs in a conventional parking space.

A lithium-ion battery drives two specially designed 2Kw electric motors in the front wheels, giving a range of 31 miles (50km) and a top speed of 28mph (45km/h), with Japanese versions amped up to do 37mph (60km/h). Recharge time is about three hours. It is built around an aluminium space frame with a plastic body and weighs just 300kg.

It feels delicate and a slight clackety as you climb in and close the vestigial door bar. There’s an accelerator and brake and a conventional, squared-off steering wheel, with push-buttons to select drive, reverse or park, next to a simple liquid crystal display giving information on the drive selected, vehicle speed and battery charge.

Push Drive and the little trike surges gently against its brakes, eager to be off. The test cars were straight from the Geneva Show with their speed and performance limited, but you fair zoom across the car park when you stand on the throttle. Like scooters, there’s a torque reaction which lifts the already high-mounted body so the initial impression is of flying close to the ground rather than rolling. Turn the wheel and i-ROAD swoops from side to side like a cross between a scooter and a dragonfly. It feels delicate, rather than spindly, but it’s also unlike anything I’ve ever driven.

“It takes a while to become accustomed to the way it works,” says Kanaka, “but anyone who has ridden a scooter gets used to it very quickly.”

I ride a motor bike and am used to leaning into corners so the sensation wasn’t entirely alien, but you have to get used to the way the rear steering turning radius tightens markedly as you slow down. At low speeds you can slot the i-ROAD through gaps barely wider than the front wheel arches and Kanaka is hoping to attract not just hip young refugees from two wheels, but also young and old urban gadabouts and even mothers, who would strap their child into the rear seat.

Safety is largely down to I-ROAD’s low speed and manoeuvrability at the moment.

“No two wheeler can brake fully and turn at the same time,” says Kanaka, “but this one can.”

He admits, however, that if the i-ROAD went into full production he would need to look at a more crash worthy structure and stronger side doors as well as full weather sealing, although that will add weight which will affect the performance. There are no prices yet, but we don’t think it will be the same sort of price as the more simple rivals such as the Renault’s £7,000 Twizy, or Piaggio’s three-wheeled £6,000 Mp3.

A measure of the appeal of this charming little car came as darkness fell over Tokyo. Koji Fujita’s bodywork design looked even more terrific in the half light, with the single Cyclops headlamp just perfect for this futuristic vehicle. Yet even as the launch venue was being packed away, there was still a long queue of journalists (and interpreters!) waiting to get a second or third drive of this remarkable vehicle.

If you can’t wait for Toyota to decide whether to put i-ROAD into production, fear not. There will be an opportunity to drive it next year when it goes into limited production for a brace of field tests at Toyota City near Nagoya in Japan and Grenoble in France. You’ll be able to book one via your smart phone, or a laptop and hire charges for a typical five-mile journey will be about £4.

Get out there and get swooping!