Skip to content
Home Miscellaneous Which Corolla is fastest? 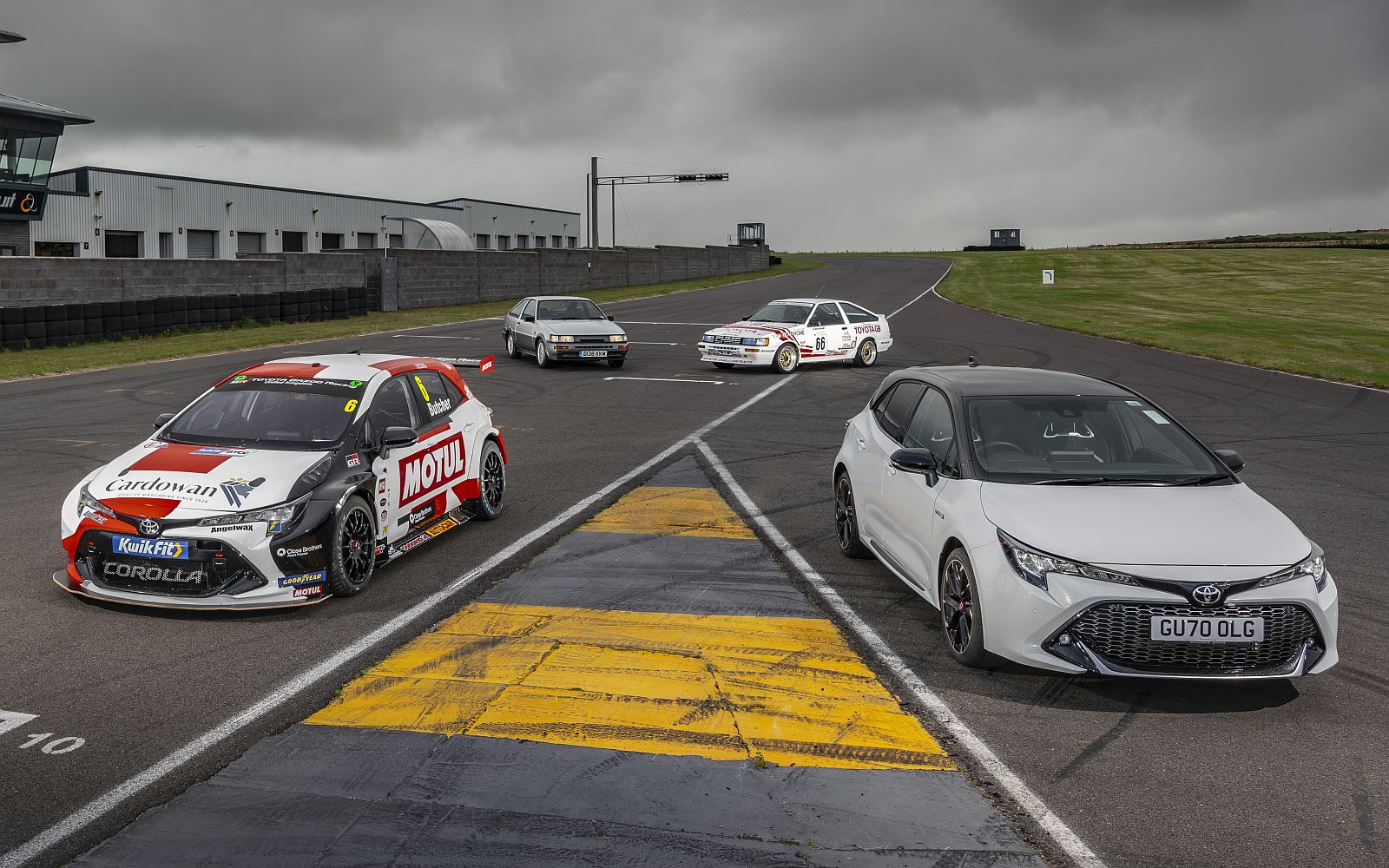 Which Corolla is fastest…? To answer this question an impressive group was assembled at the challenging Anglesey Circuit in Wales, featuring a new Corolla GR Sport hatchback pitched as the protagonist in a series of lap battles between two generations of road and race Corolla models.

Overseeing the showdown was the high-performing Toyota Gazoo Racing UK touring car team, with drivers Rory Butcher, Sam Smelt and Scott McKenna as well as team principal Christian Dick being tasked with answering the burning question: Which Corolla is fastest?

Little did we know that the results of our timed comparisons would provide surprises as well as plenty of ammunition for further discussion.

Two production road cars separated by almost 35 years and six generations of continual development. Although they share the same Corolla name, in almost every other respect they’re very different beasts. The iconic AE86 GT Coupe has a longitudinal engine, manual gearbox and rear-wheel drive, while the new Gazoo Racing-inspired GR Sport has a transversely mounted petrol-electric powertrain and CVT transaxle delivering drive to the front wheels.

It is interesting to note that although the GR Sport’s hybrid drivetrain offers a 43% power advantage over the Coupe’s venerable twin cam engine, generous specification and advanced safety features means the new car weighs approximately 60% more. This gives it a lower power-to-weight ratio. Nevertheless, the structural rigidity, low centre of gravity and sophisticated, multi-link suspension afforded by its GA-C platform gives the GR Sport a comfortable (in more ways than one) win.

Race two sees the race-spec AE86 GT Coupe avenge its road car’s defeat. Touring car regulations in the late Eighties meant that the race Corolla closely resembled its production equivalent, with tuning of the original engine and weight loss being the primary differentiators. And it’s the alterations in these two areas that makes this particular head-to-head so fascinating.

Race tuning the GT Coupe’s engine has elevated its power output to roughly the same level as the system output of the standard Corolla GR Sport. But when this increase in horsepower is considered alongside the car’s 150kg weight loss, the power to weight ratio of the classic is now almost double that of the new car. Yet despite this appearing to be the very opposite of a level playing field, the new GR Sport equips itself surprisingly well and remains within touch of the high-revving Coupe.

Let’s be honest, the outcome of this race was a given; there was no way that a standard GR Sport could beat its motorsport equivalent around a circuit. To redress the balance, however, we’d have to admit that a Toyota Gazoo Racing UK BTCC car would not be an enjoyable companion on the daily commute. But beyond the obvious result, further data comparison reveals a genuine surprise.

Whereas the retro GT Coupe race car used its 190% greater power to weight ratio to deliver a 0.9 second faster lap time compared to the standard Corolla GR Sport, the modern BTCC Corolla uses its 230% power to weight advantage to deliver an astounding 18.8 second time difference around a single lap of the Anglesey Circuit. In fact, if we had asked the two racers to carry on driving, the modern BTCC car would have lapped the classic BTCC car early on the sixth round.

Which is faster? Our review

It has been fascinating to see how efficiently a modern Corolla GR Sport road car translates its system output into movement, especially when the car’s latent athleticism is extracted by a professional driver. Even when pitched against an authentic replica of Toyota’s double championship-winning Corolla GT Coupe, a classic BTCC car with almost double the power and half the weight, the new Corolla equipped itself with surprising confidence.

Every one of the Toyota Gazoo Racing UK drivers came away from the Corolla GR Sport with praise for its balance of performance, handling, comfort and safety. The fact that in less frenzied circumstances it can also achieve well over 50mpg appears to defy logic.

But it is when that same state-of-the-art engineering is multiplied through motorsport tuning that the track result became truly spectacular. So this isn’t so much an overall win for the 2021 Toyota Gazoo Racing UK Corolla, more confirmation of the inherent quality of the production car it is based on. Not only does the road-going GR Sport set a competitive standard against notable company but when its fundamental engineering is fully exploited in motorsport the end result is the sort of exponential increase that would have been impossible 35 years ago.