Skip to content
Home New Tech News What is Toyota bringing to the Goodwood Festival of Speed? 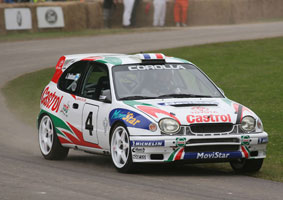 Motorsport and Goodwood go together like a horse and carriage, so it’s fitting that we’ll be bringing some of the most important Toyota race and rally cars from the last 50 years to the Goodwood Festival of Speed next weekend.

Endurance racing driver Anthony Davidson will be there, fresh from a podium finish in Toyota Hybrid Racing’s TS040 at the Le Mans 24 Hours. The team’s valiant effort in the world-famous race means they’ve secured a commanding lead in the FIA World Endurance Championship. Davidson will be demonstrating the 1,000bhp hybrid’s turn of speed with runs on Goodwood’s hill climb course on Saturday and Sunday, with team-mate Stéphane Sarrazin due to take the wheel on Friday.

Meanwhile up at the rally stage, Björn Waldegård will take to the track in his Group B TA64 Celica and former Toyota world champion Didier Auriol will throw around a Tarmac-spec Corolla WRC on the hill.

Two further generations of competition Celica  – the ST185, which in its lifetime netted three WRC manufacturer championship titles, and the ST205 – will also be kicking up the dust on the rally stage. Double British Rally Champion David Llewellin will drive an array of machinery, including the classic Team Toyota-liveried Midgley Motorsport Corolla AE86 and the earlier TE27 Corolla. John Reid will be seen in his 1997 Corolla WRC, marking the culmination of Toyota’s world rally involvement.

Rounding off the cadre of rally cars in attendance is the Imperial Toyota Hilux that took a class win and fourth place overall in this year’s Dakar Rally in the hands of South African rally-raid aces Giniel de Villiers and Dirk von Zitzewtiz. It will be driven at Goodwood by British rally star Alister McRae.

To say NASCAR is popular across the pond is something of an understatement – it’s huge! For the past decade, Toyota has been a front-runner in the sport with the Camry, which has competed in the Sprint and Nationwide series, and Toyota’s Tundra pick-up competes in the Truck championship. At Goodwood, three Camrys and a Hilux from Michael Waltrip Racing and Red Bull Racing, will be adding some American noise and muscle to the festival.

At the other end of the spectrum is the Toyota Motorsport EV P002, which will be driven up the hill by Jochen Krumbach. In 2012, Krumbach broke the Nürburgring lap record for an electric vehicle with the EV P002. The EV Poo2 is powered by two electric motors that provide 350KW of power and a top speed of 160mph.

A glamorous trackside public pavilion will display the GT86 in both road-going and competition form. The youthful new Aygo city car will also be on show, together with Toyota Racing’s 2013 Toyota TS030 Hybrid, a double race-winner in the FIA World Endurance Championship.

Finally, for Goodwood’s ‘First Glimpse’ event, there’s the chance to be among the first in the country to clap eyes on the 2015 GT86, which benefits from a series of subtle tweaks.