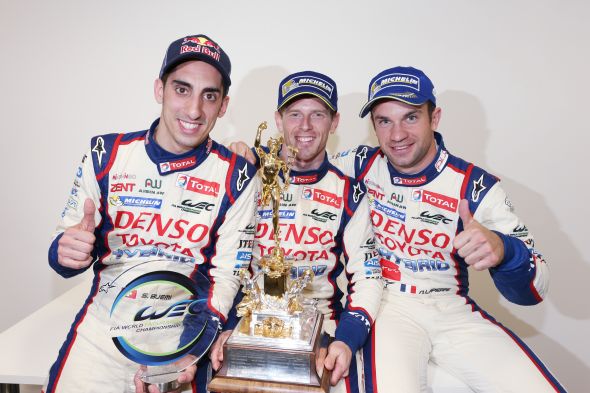 Congratulations are in order! The 1000PS, four-wheel drive Toyota TS040 Hybrid won a convincing first race over the weekend thanks to the combined efforts of Anthony Davidson, Nicolas Lapierre and Sébastien Buemi in car #8. It is a result that means an early lead for the Toyota Racing team in the eight-race World Championship.

Track conditions varied from completely dry to torrential rain, which ultimately saw the race red flagged less than 30 minutes before the chequered flag.

Wurz started from pole and held the advantage during an exciting opening lap that saw Buemi move from fifth to third. The TS040 Hybrids were at the heart of the action with several position changes before rain came around the 40-minute mark. Both cars pitted for new tyres, the #7 taking wets and the #8 an intermediate compound.

When the rain eased, intermediate tyres proved the most effective and Buemi used his four-wheel drive hybrid system to good effect in building a comfortable lead. Wurz lacked grip on the wets so dropped to third and, after around 90 minutes, handed over the #7 to Nakajima, who switched to slicks for the rapidly drying track. The #8 did likewise soon after when Lapierre took over from Buemi.

Conditions remained dry, allowing Lapierre to firmly establish the #8 in the lead, with Nakajima tightening his grip on second in the #7 before swapping with Sarrazin soon after the halfway point. A safety car interrupted the drama briefly, during which time Davidson stepped into the race-leading #8.

Heavy rain hit the track with just over an hour remaining and the team responded by calling both cars in for wet tyres, while also swapping drivers; Nakajima replacing Sarrazin in the #7 and Buemi swapping with Davidson in the #8.

The safety car was deployed with 40 minutes left before the race was ended early, with further running impossible in the wet conditions. That confirmed Toyota Racing’s sixth win from 15 WEC races, its second consecutive victory following its triumph in the 2013 season finale in Bahrain.

The second round of the season comes in less than two weeks with the Six Hours of Spa-Francorchamps in Belgium on 3 May.