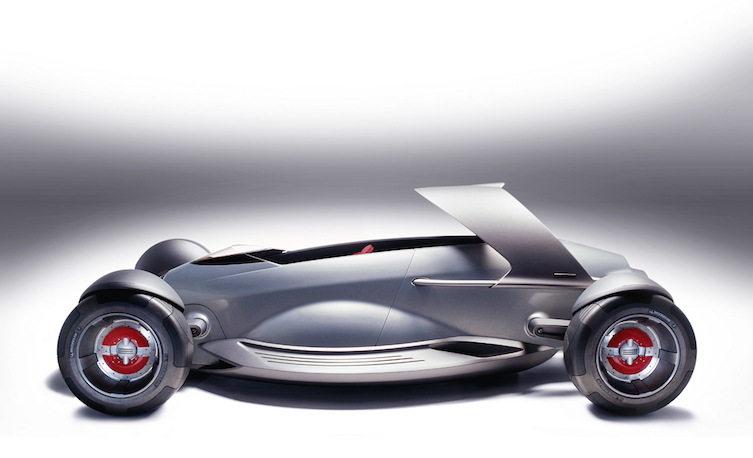 Here’s a look back at the incredible concept cars Toyota has shown at motor shows in recent years, starting with the Motor Triathlon Race Car from 2004.

Like a full-size remote-control toy buggy, the outrageous Motor Triathlon Race Car (MTRC) was Toyota’s response to future customer demands. A tandem two-seater that combines off-road ability, sports car performance and motor sport derived high technology, the MTRC showed that Toyota was now targeting not only the customers of today, but also tapped into what will appeal to future generations.

The Motor Triathlon Race Car was designed and built at Toyota’s European design studio, ED2. It is propelled by four in-wheel electric motors powered by a Toyota fuel cell stack, enabling the stylists much more freedom when designing the shape of the car than a conventional internal combustion engine and four-wheel drive transmission would allow.

MTRC was conceived from the outset to compete in three different environments, as if in an automotive triathlon: off-road, race track and city street circuits. That combination of tracks might seem unusual, but it is common place to the millions who play and enjoy car racing computer games where part of the attraction is dramatic, high speed dicing through varied, realistic environments.

No surprise then that the Motor Triathlon Race Car was available to ‘drive‘ in Gran Turismo 4, the massively popular video game developed by Sony Computer Entertainment and Polyphony Digital.

The wonderfully innovative Toyota i-ROAD concept stole the limelight at the 83rd Geneva motor show in 2013. Its clever tilting capability and riding-in-tandem layout offered a glimpse at the ideal city transport of the future.

i-ROAD has since been trialled on public roads in Japan and Grenoble, France.

Ever since the GT86 was unveiled, car fans have been speculating about the possibility of a convertible version. Toyota delivered exactly that in the form of the FT-86 Open concept at the 2013 Geneva show.

Presented with the exciting ‘Shadow Dodging’ film above, the car caused a stir but sadly is yet to go in to production.

The RAV4 Adventure pointed toward a more rugged-looking and stylish version of the popular SUV. It appeared alongside a second concept, the RAV4 Premium.

The FT-Bh concept was given a world premier in Switzerland in 2012. It promised to use cost-effective technologies and manufacturing methods to minimise emissions.

Powered by a two-cylinder 1.0-litre petrol-electric hybrid engine, the FT-Bh claimed fuel efficiency of 134.5 mpg and CO2 emissions of 49g/km.

The Yaris Hybrid is now a familiar sight on roads throughout the UK and Europe, but the journey to mainstream popularity began with this 2011 concept.

Unlike some concepts, the Yaris HSD bore a remarkable resemblance to the finished product – the Yaris Hybrid arrived on UK roads the following year.

The prelude to the production-ready GT86, which launched in 2012, the FT-86 II was the second iteration of the FT-86 concept. Compared with the first design study, it featured styling tweaks from the front to rear, particularly around the lights and bumper treatments, while retaining the overall sleek shape of the first model.

Intended as a look ahead to future hybrid design, the Toyota Hybrid X concept showcased a series of forward-looking styling features. Designed without B pillars behind the front seats, the car’s A and C pillars instead wrapped around the roof to create a glasshouse effect.

Other features were designed to maximise aerodynamic efficiency – for example, the headlights were mounted inside the cabin on the dashboard, and projected through the front windscreen.

So which is your favourite concept? Is it the Motor Triathlon Race Car or one of the others? Let us know in the comments section below this article.