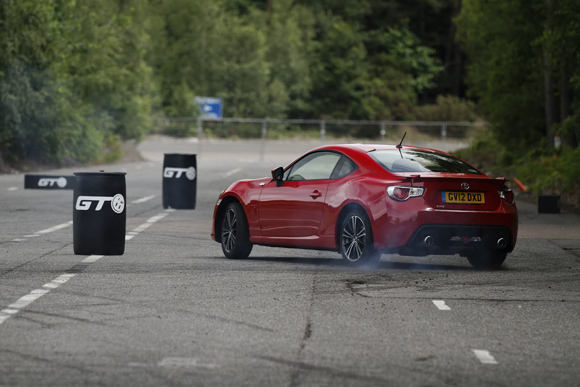 What was the most fun day at school? For a lot of us here at Toyota, it was school sports day – a whole afternoon of no ‘real’ lessons, just running about in the sunshine and watching the teachers get exasperated.

With the weather improving we thought it time to recreate those halcyon days by holding a sports day of our own. But with cars.

The Toyota Sports Day takes place on Saturday 20 June and you could be part of it.

We’re gathering together a fleet of Toyota vehicles of varying shapes and sizes and swapping the school sports field for Bruntingthorpe Proving Ground in Leicestershire.

The day will comprise four events:

It’s an old favourite, but we’re updating it by using a giant spoon mounted to the front of a Toyota Auris Hybrid. A giant spoon needs a giant egg, so we’ve got some of those too. Drive the Auris Hybrid around an obstacle course faster than your rival without dropping the egg from the spoon.

Simple – two contestants take it in turns to punt a football towards a goal. Five shots each, most goals wins. The twist? The football’s enormous, and the boot is a Toyota Aygo.

Racing in twos, drivers jump into a Toyota Hilux and navigate a course. A giant basketball is held on a net suspended in the truck’s bed, and the aim is to finish the course without the ball rolling off.

Strap into the Toyota GT86 for some sideways action as competitors navigate a barrel-filled course as fast as they can. Time penalties are added for not getting the back end out!

You’ll have to get yourself to Bruntingthorpe, but we’ll feed you and keep you in glasses of orange squash. You must be over 21 years old on June 20, 2015, and have a full driving licence valid in the UK.

Want to join us? Then fill out the below form for a chance of winning one of 10 spots on the day. Entries close at midnight on Tuesday 5th May 2015.