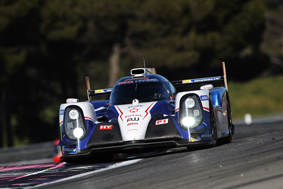 Toyota Racing starts the 2014 FIA World Endurance Championship (WEC) season with a race debut for its new 1000PS TS040 HYBRID in the Six Hours of Silverstone this weekend.

The new car, which features Toyota’s ground-breaking four-wheel drive hybrid technology, has completed over 25,000km of testing in preparation for the first of eight WEC races this year, which includes the Le Mans 24 Hours.

High-downforce specification TS040 HYBRIDs will be used at Silverstone, providing better aerodynamic grip at the cost of top speed, with a low-downforce package already prepared for the high-speed Le Mans 24 Hours in June.

Toyota Racing has finished on the podium in both its races at Silverstone so far, starting from one-two on the grid in 2013, and is targeting a victory to make a perfect start to the new season.

New regulations for 2014 mean the TS040 HYBRID will produce more power, courtesy of its 520PS 3.7litre petrol engine and 480PS hybrid system, while simultaneously using 25% less fuel than its predecessor, the TS030 HYBRID.

Under deceleration, motor-generators on the front and rear axles apply braking force in combination with traditional mechanical brakes to harvest energy, which is stored in a super-capacitor. During acceleration, the motor/generator reverses its function, acting as a motor to deliver a power boost.

Unlike previous seasons, the TS040 HYBRID is permitted to recover and release energy at any point on the circuit, allowing the team to strategically employ the technology for efficiency or performance.

Yoshiaki Kinoshita, Team President said: “After all the pre-season testing, Silverstone is the first chance to truly judge how competitive each car really is. So it is a very exciting time and a moment I have been anticipating for many months. Our team has worked extremely hard to be ready for this race and we believe we are in good shape.

“We have hit our performance and reliability targets; now we will see where that puts against our competition. With three manufacturers now competing in LMP1, I expect an exciting battle throughout the season which is great news for fans and positive pressure for the teams. We are better prepared than ever before so I cannot wait to see how the race plays out on Sunday.”

Anthony Davidson(TS040 HYBRID #8) said: “As my home race, and the first race of a big season for TOYOTA Racing, I have been looking forward to the Six Hours of Silverstone for a long time.

“After all the development and testing, the first race is when we really see who has the upper hand. We have pushed very hard over the winter and I think the TS040 HYBRID is a big step forward compared to last year’s car. I enjoyed the winning feeling in Bahrain in the last race of 2013, so I’m really motivated to fight for another victory this weekend.”