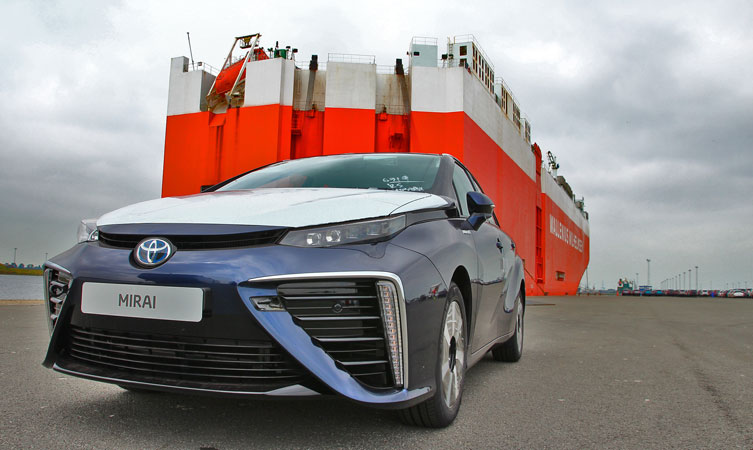 Toyota has taken another step towards a hydrogen-powered future with the arrival of the first Mirai fuel cell vehicles at its import centre at Portbury, near Bristol.

The cars, landed on Saturday, are part of the first consignment to reach Europe, ahead of the Toyota Mirai’s official launch in September.

As part of Toyota’s global introduction of the world’s first mass-produced fuel cell saloon, the four-door Mirai is being offered in selected European markets – the UK, Germany and Denmark – where a hydrogen fuel supply and retail infrastructure is being developed.

The limited number available in Britain this year have already been snapped up, principally by business and corporate customers keen to be among the first to explore the potential of Toyota’s advanced fuel cell technology and its promise of zero harmful tailpipe emissions.

Karl Schlicht, Executive Vice President Toyota Motor Europe, said: “This marks the debut of a new age for clean mobility, a turning point in the history of the automobile. With Mirai and its fuel cell technology, Toyota is working on delivering clean, safe and enjoyable mobility for the next 100 years. 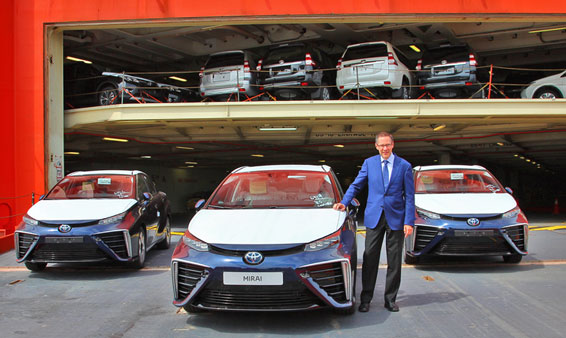 “We are looking forward to the start of deliveries of the first Mirai to customers from September and to see the future taking shape on European roads,” he continued.

“As with Prius 15 years ago, we are proud to bring yet another ground-breaking innovation to the marketplace.”

See also
The Toyota Mirai can be powered by bullsht
10 things you need to know about Mirai
Toyota Mirai: The future has arrived

Mirai – the name means “future” in Japanese – is designed to be as convenient to drive as a conventional petrol-powered car.

Hydrogen fuel is stored on board in high pressure tanks and used to generate electricity in a chemical reaction with oxygen in a Toyota-designed fuel cell stack. The energy produced is used to drive the car, with the only tailpipe emissions being water vapour.

As with Prius 15 years ago, we are proud to bring yet another ground-breaking innovation to the marketplace – Karl Schlicht

Refuelling from empty takes between three and five minutes at the pumps and Mirai has a driving range similar to conventionally powered vehicles.

The knowledge and expertise Toyota has gained with its successful development of hybrid power directly contributes to the advanced engineering skills used to create the Toyota Fuel Cell System.

By bringing Mirai to world markets, initially in Japan, the USA and Europe, Toyota aims to build awareness, understanding and acceptance of fuel cell technology and promote the development of the hydrogen fuel production and retail infrastructure this new generation of vehicles requires. 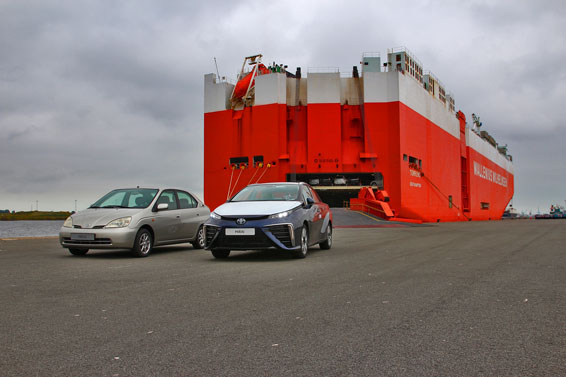 The experiences of the first customers to drive Mirai will also be valuable in helping Toyota further refine and develop the technology.