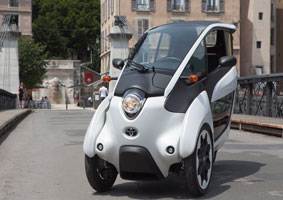 70 Toyota i-Road and “COMS” ultra-compact electric vehicles will be available in new car-sharing scheme in the French city of Grenoble from October, kickstarting the first official on-road trial of i-Road in Europe.

Called “Citélib by Ha:Mo”, this innovative service is ready for pre-registration by Grenoble commuters on www.citelib.com and will be operational for a three-year real-life test.

In October 2014, 70 Toyota i-Road and COMS ultra-compact electric vehicles, and around 30 charging stations developed and managed by energy firm EDF’s subsidiary Sodetrel, will be open for service thanks to a unique partnership between the City and the Metropolitan Area of Grenoble, French energy company EDF, Toyota and Citélib, a local car-sharing operator.

Connected to the public transport system’s IT infrastructure, this new car-sharing scheme will complement Citélib, the current car-sharing service of Grenoble, by allowing users to pick up one of the small EVs at one location and drop it off at another.

The project also aims to promote interconnectivity of public transport methods (trams, buses, trains) and a new type of personal mobility using small vehicles that don’t take up as much space as a normal car. The main idea is to allow commuters to drive the first or last kilometres of their journey for increased flexibility and time-saving, thus contributing to reducing traffic congestion and improving air quality in city centres.

“The Grenoble-Alpes Métropole community has always been open to innovation,” said Christophe Ferrari, President of the Grenoble-Alpes Métropole. “In terms of scale, it’s perfectly suited to this kind of test, and in Grenoble, we have a tradition of daring to do things. The partnership itself, between us, Toyota, EDF and Citélib, a local car-sharing operator, is in and of itself also an innovation in France,” he added.

“It’s a great opportunity for our community to test, for three years and exclusively in Europe, a new mode of mobility that’s not only innovative but also economic and ecological It’s an experimentation that is bound to be followed by others for the benefit of our citizens.”

The scale of this integrated and complex project means it’s impossible to realise alone: partnerships and collaboration are key to its success – between the project partners of course, but also with the local communities.

Toyota is providing the 70 ultra-compact electric vehicles used in the project: the Toyota COMS (single-seater, four wheels, a small rear storage compartment) and the Toyota i-Road (two-seater, three wheels with Active Lean technology). The latter introduces a completely new and fun way to drive. Very compact, it combines the exceptional handling of a motorcycle or a scooter with the comfort and stability of a car. Four i-Road occupy the footprint of a single car.

Toyota is also developing a data management system that will enable the visualisation and reservation of the vehicles. The system will integrate with Grenoble’s existing transport IT system to offer route planning with different modes of transport from a smartphone. Citélib by Ha:mo is Toyota’s second “Ha:mo” (short for Harmonious Mobility) project and the first outside Japan.

“This concept fits within our overall future mobility vision which is based on four pillars: safety, comfort, ease of use and ecology,” commented Michel Gardel, Vice President of Toyota Motor Europe. “Ha:mo was designed to reduce the stress caused by traffic jams, peak traffic hours, and searching for a parking space. It also allows a reduction in emissions that cause poor air quality in city centres,” he added.