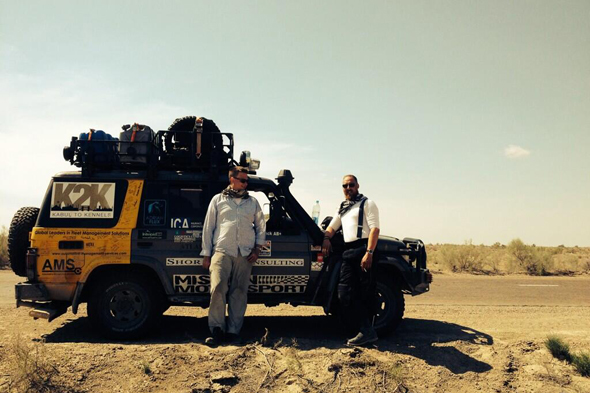 No easy task, but the team led by ex-Royal Marine Chris Short finally completed their journey at midday on June 27th as they rolled through the gates of the 2014 Goodwood Festival of Speed.

In the process the team has raised over £22,000 for their chosen charity, Mission Motorsport – a group that helps the recovery and rehabilitation of those affected by military operations by offering a chance to get involved in the business of racing cars and bikes…

We supported their challenge and have covered the journey with regular reports, pictures and film footage.

You can catch up with previous reports here:

Arriving at the Toyota stand at the Goodwood Festival of Speed exhausted by their marathon journey.

The effort was enormous, but well worth it said Chris Short, who completed the journey on a motorbike.

“I’m very happy, very tired and really looking forward to a cup of tea.” He said. “It was hard… in fact, it was really hard – but that’s exactly what it was meant to be.”

“I guess one of the most memorable experiences was going through the deserts in Kazakhstan and that will stay with me for a very long time. The whole thing was challenging. The first 3000 km were off road and as I was riding a bike, I was thrown around quite a lot…”

“And the inevitable delays meant upping the pace towards the end of the journey. I think we have bee averaging around 600miles a day over the last week, just to make up lost time.”

“But I am thrilled to be here – and pleased to have raised so much money.”

“The only issue was a radiator problem that we easily fixed. And although I had never driven on roads as anything as rough as those in the Afghan and Kazakh deserts and the car was top heavy (with spare tyres and supplies) but it coped with it fine… In fact, you could say it managed those roads better than those around here!”

Film maker Laurence Cameron completes the three man crew and has recording the adventure for a television documentary. A series of films are being made about the expedition. Stay tuned to watch them, here.