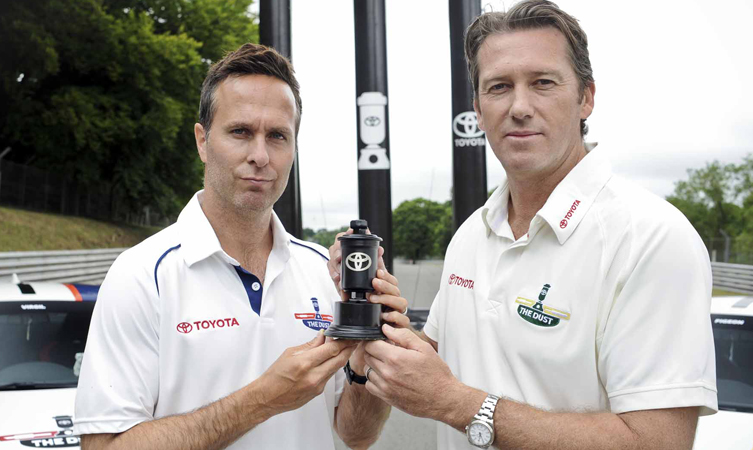 One of the great rivalries in international sport has been rekindled on the race track with Toyota giving cricket legends Michael Vaughan and Glenn McGrath the chance to #settlethescore at the wheel of a GT86 coupe.

The ex-England skipper and former Australian star bowler went head-to-head in a one-off driving challenge to determine who could get one up on the old enemy, but at the wheel instead of at the wicket.

True to its brand promise of Always a Better Way, Toyota – an official partner to both the England and Wales and the Australian Cricket Boards came up with a contest on a specially designed course at the world-famous Brands Hatch circuit.

Setting aside bats and balls, each man was given a Toyota GT86 in which to demonstrate his superiority in speed, handling and tactics. For the winner, there was the honour of claiming not the Ashes, but a new trophy – the Dust.

Michael Vaughan said: “Glenn and I had a number of hard battles on the pitch over the years and I’ve missed those since I retired from the game. This challenge has given us both a great opportunity to re-ignite that competitive spirit and I can assure you that both of us left everything out on that race track.”

Glenn McGrath added: “This was a new kind of challenge for us, but as sportsmen it brought back those competitive instincts. The fact we were able to do this by driving great cars on a world-famous track made the occasion all the more exciting and the will to win even greater.”

See how the score was settled in our video below.

Toyota launched its sponsorship of the England and Wales Cricket Board this summer. Like Toyota, the ECB brings together long-standing tradition with dynamic innovation and technology to help improve performance and increase enjoyment.

See also:
Win tickets to the final match in The Ashes series

For more information on Toyota’s partnership with English cricket and #settlethescore go to: www.toyota.co.uk/cricket