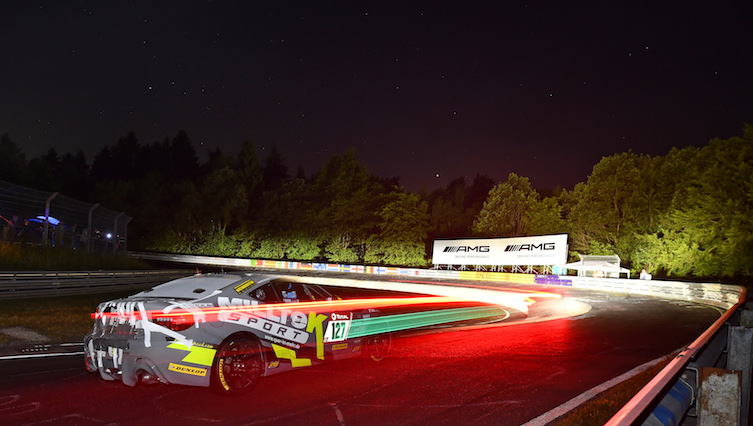 Milltek Sport returned to its headquarters in Derby filled with emotions after finishing fourth in class in their production-based Toyota GT86 at the Nürburgring 24 Hours.

The Toyota GB blog has reported on the plucky privateers’ exploits at the Green Hell for several years, but this time it was a miracle that their rear-wheel-drive sports car made it to the end.

During the race, the Milltek Toyota GT86 was twice struck by GT3-spec BMWs. Thankfully the driving crew – comprising Moritz Gusenbauer, Dominic Tranchet, Werner Gusenbauer and Chris Chadwick – were able to get the car back to the pits both times. Milltek Sport’s crew, with the support of Manheller Racing, pulled out all the stops to get the No. 127 Toyota GT86 back out on track and over the finish line. 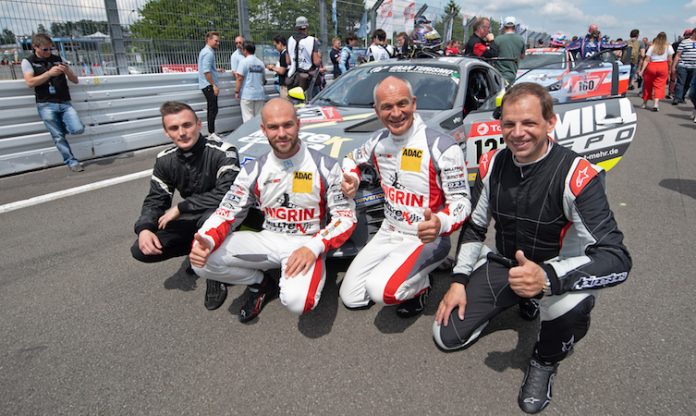 After qualifying third in class, Moritz Gusenbauer took the start and fought through to take the lead the SP3 category. During his charge, he set the team’s fastest race lap, an impressive 10min 11.273sec, at an average of 122.319kph.

At 5:30pm, Dominic Tranchet took over and enjoyed a relatively comfortable drive until around 7pm on Saturday evening, when he was shunted from behind by a BMW GT3. He spun twice and hit the barrier with the rear and front of the GT86 before dragging the car to the pits for a major repair session.

As soon as the pit crew received the news that Tranchet was headed to the pit lane, the sticky tape was out and repair patches were being formed in preparation. However, when the Milltek Toyota GT86 arrived in the pit lane, they realised they’d underestimated the extent of the damage and had to remove the spoiler, reshape the trunk with the largest hammer, scrap one of the ATS race wheels and replace all four tyres. 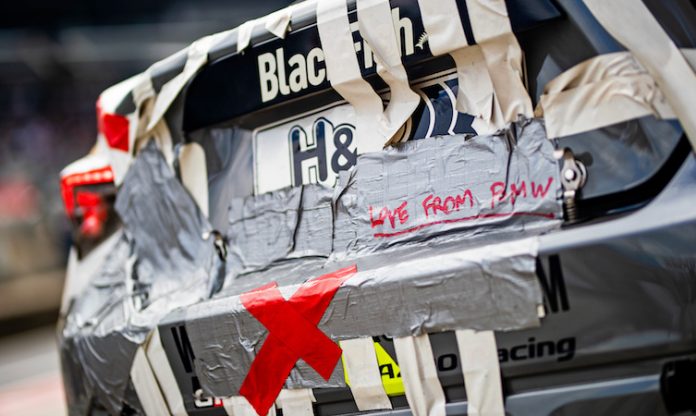 After seven minutes, the GT86 was released again with Werner Gusenbauer driving. The contact with the barrier had destroyed the fine balance and handling of the Toyota. He pitted just after 9pm for a 13-minute stop while more work was carried out to try to realign the car, before Chris Chadwick jumped aboard.

Chadwick had barely made it out of the pit lane before he experienced power failure, but managed return to the pits for a reset, which was done in under two minutes. He rejoined, but the handling was still awry and he struggled with understeer in some corners and oversteer on the other. Chadwick managed 11 laps between 9:40pm and midnight before handing back to Tranchet.

A scare for the Milltek Toyota GT86 crew

Tranchet had five laps under his belt before disaster struck at 1am: while they the pit crew were taking a well-deserved break, they received an unexpected call that the car was in the pit lane.

It had suffered a steering failure due to some damage going unnoticed from the earlier incident. The brackets that keep the steering column in place had broken, setting off the windscreen wipers and fluid washers before the column dropped completely into the drivers’ lap.

Tranchet came out of the Milltek Toyota GT86 looking shaken, while chief mechanic Alex Harris jumped in (upside down) to assess the problem. Knowing it would take some time to resolve, the rest of the pit crew took the opportunity to change the brake pads and discs and readjust the camber and tow. Harris spent just under 30 minutes upside down in the footwell, before confidently sending the car out once again, with Moritz taking on his second stint.

He subsequently handed over to Werner, and the team was confident that all the issues had been resolved. That was, until 5.30am when Werner came back to the pits after another hit from a different GT3 BMW. This time the damage was only cosmetic, so Chadwick jumped back and lapped quickly, now that the car was handling in a more predictable way.

After an hour, the team received a radio message from Chadwick that there was loud rattling coming from the engine and the gear selector was loose in the tunnel. He pulled in at the end of that lap, around 7.00am. Thinking that maybe the manifold had cracked, the undertray was removed and the manifold was inspected, before the crew realised that it was not the manifold but the engine mounts that had both failed. 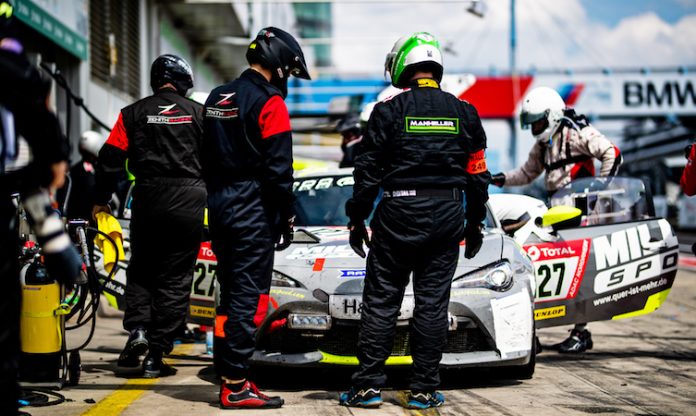 The crew went into overdrive and got the spare engine mounts while Harris and Milltek Sport managing director Steve Pound spent the next hour under the car and repaired the damage. Precautionary replacement of both wheel bearings on the left of the car was undertaken by the rest of the crew in record time.

At 10:50am, Tranchet had been back in the car for less than five minutes before the steering wheel dropped into his lap again. The GT86 was pulled in once again and it was time for the team to decide whether to retire or whether it had the driver capacity to carry on.

Against the odds, back in the battle

Tranchet, Chadwick and Moritz all voted to continue. Moritz took on the last leg and at 3:30pm drove the grey and green, tape covered, spoiler-less Milltek Toyota GT86 over the finish line in fourth place out of 13 entrants in SP3.

Everyone was tired, dirty and physically worn out after one of the toughest endurance races Milltek Sport has ever been a part of. It was hard for the team not to be disappointed with the result, but it was equally as hard not to be incredibly proud of what they had accomplished.

The hardy Milltek Toyota GT86 completed 96 laps of the Nordschleife. The incredible pit crew had worked through 13 stops with no sleep, either upside down, lying down or on their sides to make sure that the GT86 made it to the end. They exhausted their supplies of cable ties, sticky tape and energy drinks – but already have a thirst to return in 2020.