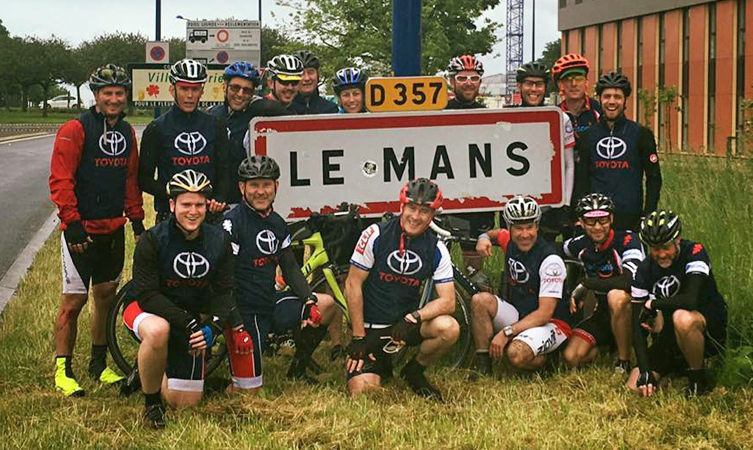 Teamwork and camaraderie has always always been at the heart of a Toyota Oaks cycle club challenge, and that was certainly the case with this year’s three-day charity ride from our Surrey HQ to Le Mans.

Twenty staff from across the Toyota GB business rode the 270 miles distance from their head office to raise money for Harrison’s Fund, a charity that supports research into Duchenne Muscular Dystrophy, a fatal genetic condition which affects all the muscles in the body, causing them to waste away.

The Toyota Oaks cycle club was established five years ago by Darren Morris, Chief Financial Officer, with the purpose to raise funds for charitable local causes or those with a personal connection to staff. Harrison’s Fund met this criteria and was proposed by one of the riders who was aware of the charity’s work as he had supported them in the past.

This year’s ride set-off on 20th May and a group of well wishers, supporters and family members joined Alex Smith, the founder of Harrison’s Fund at the grounds of the Toyota GB.

For the first day in the saddle, the team cycled through the leafy lanes of Surrey, Sussex and Hampshire and onto the city of Portsmouth in ideal spring conditions. The day also allowed the riders to get to know their fellow teammates and colleagues better and certainly stretched their legs as they took on some fairly sharp hills, most notably Bexley Hill within the South Downs National Park. The early lunch stop and coffee provided at Motorline Horsham was certainly welcome.

An overnight ferry to Saint Malo allowed for some much-needed rest, though jumping onto the saddle for day two of the challenge with a cool wind blowing and overcast skies meant there were mixed expressions upon the riders’ faces.

A few miles miles in, however, and with legs warmed up it was a more positive picture that emerged. A nourishing picnic laid on by the support crew half way into the day’s trip added to the positive outlook and helped power the team onto the town of Laval.

The team of eight support staff were greatly valued by the cyclists throughout the duration of the event as they provided an ongoing supply of fresh food, drink together with technical know-how and motivation along the route. 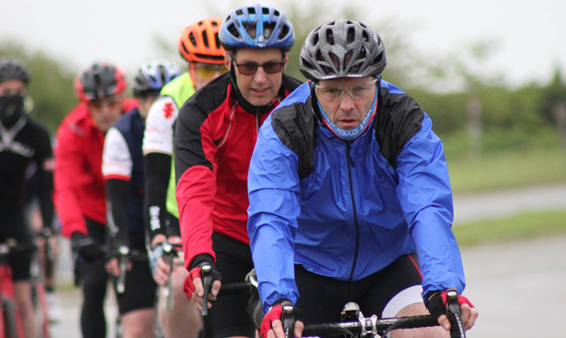 With the rain pouring down in Laval, wet weather gear was required at the start of day three. And two punctures picked-up within the space of the first couple of miles suggested it wasn’t going to be an easy final leg.

The day included over 1000m of climbing, with one particular hill offering a steep 22% ascent. It did, however, contribute towards the feeling of elation upon arriving in Le Mans and to some lengthy discussion about whether a bigger climb could be found for their next challenge.

The team has raised a total of £13,500 against their objective of £15,000, so would appreciate further donations on their Just Giving page.