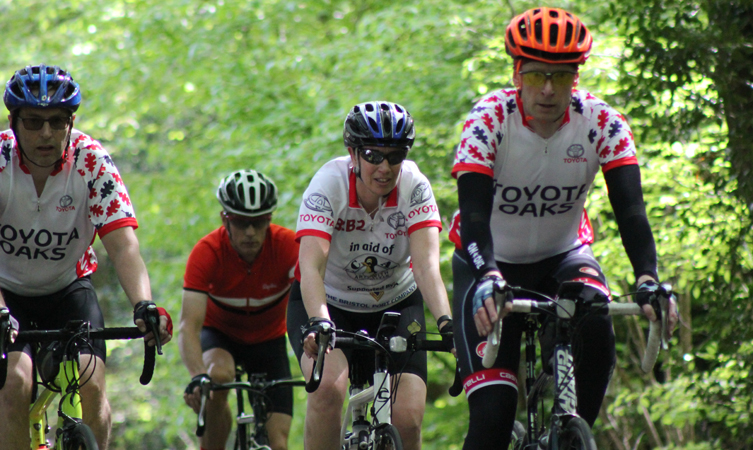 A team of 20 cyclists from Toyota GB will embark on a three-day challenge this weekend, travelling from its head office in Burgh Heath, Surrey to Le Mans in France, the home of the famous 24 Hours race.

The ride, which will also be supported by a team of six crew members from the business, has been organised to raise money for Harrison’s Fund, a charity that supports research into Duchenne Muscular Dystrophy, a fatal genetic condition which affects all the muscles in the body, causing them to waste away.

It was set up with the objective to get as much money as possible into the hands of the world’s best researchers to find a cure for Duchenne and is named after a nine year old from Surrey who was diagnosed with the condition. The riders are hoping to raise £15,000 from the event.

The Toyota Oaks cycle club consist of staff from across the TGB organisation and for the past five years they have participated in multi-day cycle rides to raise funds for charitable causes. It was established by Darren Morris, chief financial officer, to support smaller charities local to the office or with a personal connection to staff. Harrison’s Fund fits these criteria and was proposed by one of the riders who was very aware of the charity’s work as he had supported them in the past.

To support the ride, please visit our Just Giving page

“After meeting the charity’s founder, Alex, we were instantly impressed by his commitment to the funding research for this dreadful disease,” said Morris. “Not only to help his little boy but the thousands of others like him. That’s why we decided to take on this challenge and chose them.”

The team will set off on Friday 20th May and cycle to Portsmouth for the overnight ferry to St Malo. Day two will be spent cycling from St Malo to Grand-Fougeray and day three from Grand-Fougeray to Le Mans. The final day, Monday 23rd May, will see the team heading back to the UK. Le Mans was chosen as the destination as it’s where the Toyota Motorsport team will take to the famous circuit in their two TS050 race cars to contend in the gruelling 24 Hours of Le Mans race on the 18th and 19th June.

Alex Smith, founder of the charity Harrison’s Fund said: “It’s wonderful that Toyota GB has chosen to support us in this way. As a small charity, large fundraisers like this really are a lifeline to us and vital to allow us to continue our research work and supporting families with Duchenne. Good luck to the team or should that be bon voyage!”