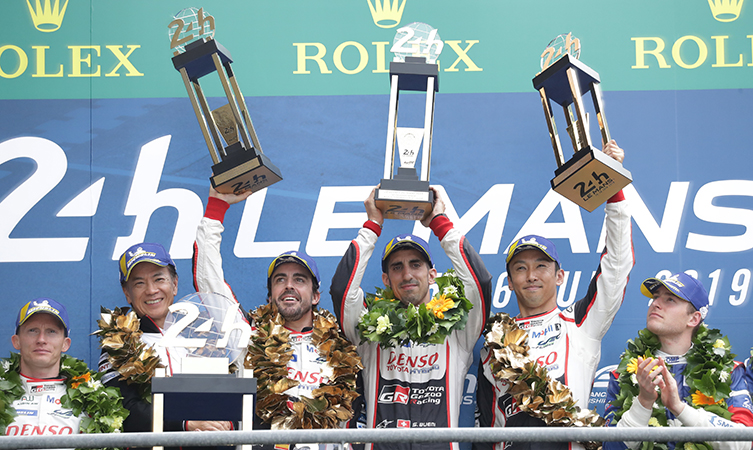 Toyota Gazoo Racing has won the 2019 Le Mans 24 Hours, making it back-to-back victories for the TS050 Hybrid in the famous French endurance race.

The #8 car driven by #Sébastien Buemi, Kazuki Nakajima and Fernando Alonso led home the sister #7 car of Mike Conway, Kamui Kobayashi and José María López after a fight for supremacy that was only decided at the start of the race’s final hour. 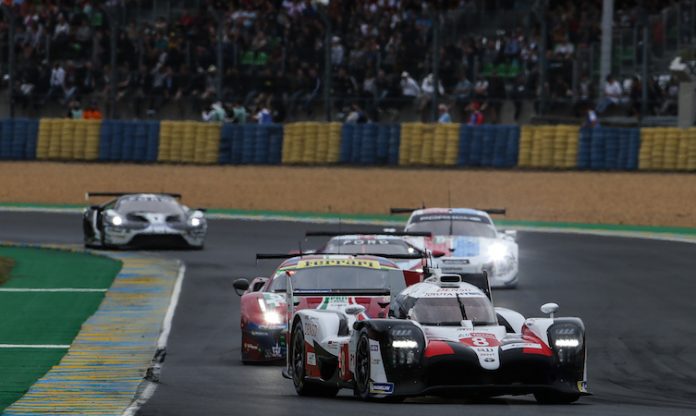 The crew of the #8 Toyota reprised their 2018 victory at La Sarthe and also sealed the 2018-2019 FIA World Endurance Championship (WEC), of which Le Mans was the final round.

Mike Conway took the start of the 87th Le Mans 24 Hours from pole position in the #7 TS050 Hybrid and kept the lead through the opening corners, despite close attention from the #8 car and the lurking non-hybrid prototypes. With a clear track ahead, Conway set a new race lap record on the fourth lap, setting a time of 3mins 17.297secs as he built an advantage over Buemi.

The British driver gradually increased his lead and, when he handed over to Kobayashi following four stints, with 43 laps completed on the same set of Michelin tyres, the #7 led by around 40 seconds. 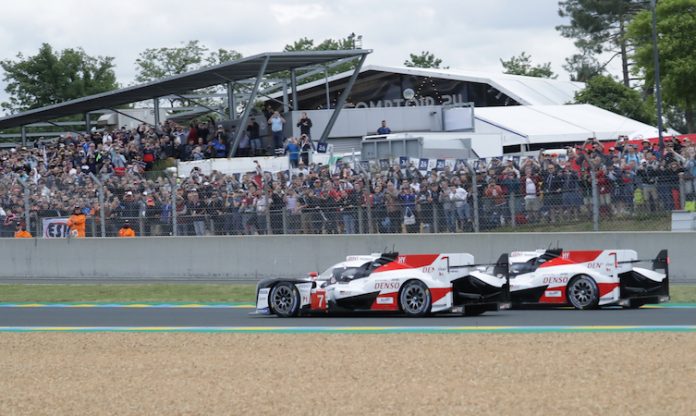 A lap later, Alonso – driving his final WEC race for Toyota Gazoo Racing – took over behind the wheel of the #8 car. Soon after the driver changes, however, the gap between the two Toyotas was stretched to a minute due to a full course caution period.

The contest between the two was intense and Alonso gradually reduced Kobayashi’s lead, bringing the deficit to the #7 TS050 Hybrid down to 45secs at the end of his stint.

When Alonso brought the #8 in for his scheduled stop to hand over to Nakajima, a safety car was brought out. A lap later Kobayashi also had to pit, swapping with Lopez, and both cars lost time when they were held at the pit exit. 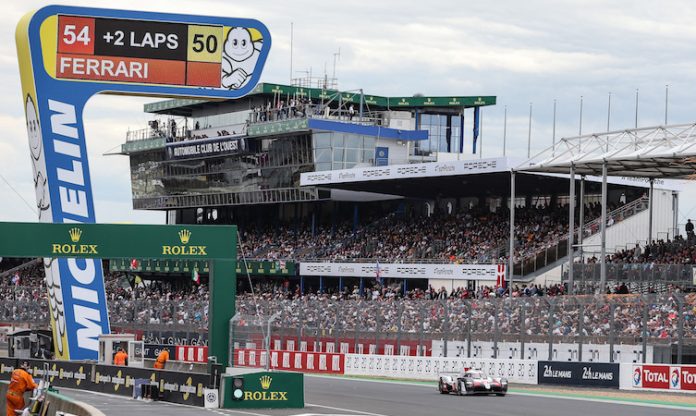 The #8 suffered most from that situation but soon recovered the lost time and more when another safety was brought out due to a GT accident. At the six-hour mark, the lead for the #8 was under half a minute from the #7.

Although the #7 TS050 Hybrid had led from pole position, steadily building an advantage over the #8 car on a warm, dry Saturday afternoon, the seventh hour began in dramatic fashion, forcing Toyota Gazoo Racing to react quickly to changing weather and race conditions.

A brief rain shower reduced grip and tyre temperatures, so Nakajima made a pitstop for new rubber after 98 laps, taking advantage of a ‘slow zone’ on one section of the circuit to reduce the time lost in pit lane. Lopez in the #7 attempted to do likewise but full racing resumed just as he was coming into the pits, so he lost additional time and the lead of the race. 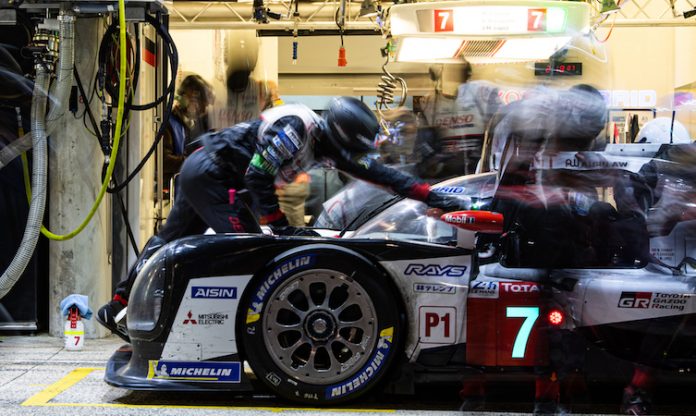 Soon after, a safety car period brought the #7 right on to the tail of the race leader and Lopez soon made his move and overtook Nakajima. His lead did not last long; a trip through the gravel at Mulsanne Corner cost a few seconds and allowed Nakajima back into the lead.

At the next driver change, early in the ninth hour, Conway resumed a fraction of a second in front of Buemi in the #8, which had pitted two laps earlier, and there was little to separate them until the tenth hour. The gap grew when an accident prompted the introduction of the safety cars. The TS050 Hybrids were held behind different safety cars, costing the #8 more than a minute.

While the #8 suffered through a safety car on that occasion, it benefited soon after. Buemi pitted under green flag conditions but two laps later Conway had no choice but to make his scheduled stop behind the safety car, wiping out his lead and putting the #7 in second, directly behind its sister car. 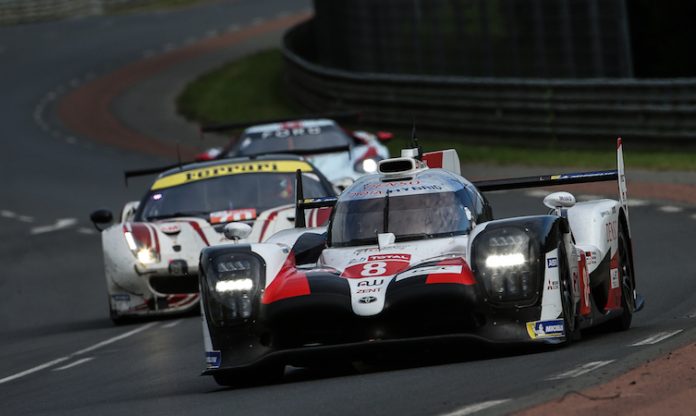 An intense battle continued through the halfway point, with Kobayashi in the #7 leading Alonso in the #8 by only 8.6secs after 12 hours of exciting racing at the front of the field.

As night turned back into day, the #7 extended its lead over the #8 machine, with the gap ebbing and flowing depending on safety car periods, back markers and pitstops. The three drivers in the #7 appeared to have a slight edge in terms of outright pace over their colleagues in the #8 TS050 and were able to keep a useful advantage in hand.

Until, that was, the final hour of the race was in sight, when drama struck: the #7 sustained a puncture and was forced to make two unscheduled visits to the pits on successive laps, handing the advantage to the #8 car.

Buemi, Alonso and the Toyota Gazoo Racing pit crew were in tears as Nakajima brought the car across the line to greet the chequered flag just after 1500hrs (local time) on Sunday afternoon. The #7 machine was just 16.972sec in arrears after 24 hours of racing.

The team will now take a well-earned summer break and begin preparations for the 2019-2020 World Endurance Championship, which kicks off with the 4 Hours of Silverstone on 1 September.