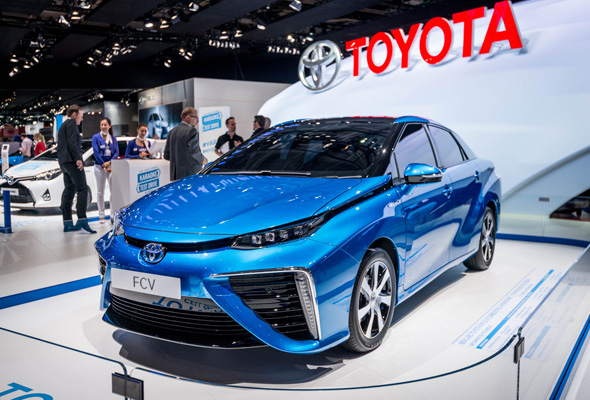 After more than 20 years of research, Toyota’s vision of the car of the future has become a reality. The new Toyota Fuel Cell Sedan, seen for the first time in Europe at the Paris motor show, can carry four people in comfort, has a driving range comparable with a petrol engine vehicle and can be refuelled in around three minutes, yet its only tailpipe emission is water vapour.

The world’s first production hydrogen-powered saloon is a development of the Toyota FCV Concept that made its international debut at the 2013 Tokyo motor show.

While remaining faithful to the avant garde styling of the concept, the Fuel Cell Sedan features a number of detail changes that make it practical for everyday driving, including adjustments to the radiator grille, headlamps, rear lights, aerial, roof and fuel filler flap. Unsurprisingly, the concept’s rear-view cameras have been replaced by conventional mirrors.

The Toyota Fuel Cell Sedan will be launched in Japan, the USA and in Europe, including the UK,  during the course of 2015.

Specific architecture
The Toyota Fuel Cell Sedan is designed to be practical for motorists’ everyday needs, being a front-wheel drive, four-door, four-seat saloon. Performance and cruising range are like that of a petrol engine vehicle and filling the fuel tank takes roughly three minutes.

To maximise cabin space and lower the car’s centre of gravity, the fuel cell, battery and fuel tanks are installed under the floor. The two tanks store hydrogen at pressures up to 700bar.

The front compartment houses the electric motor, electronic control system and boost converter. The converter increases the voltage produced by the fuel cell, so has allowed for the size of the motor and number of cells to be reduced, cutting costs and increasing performance.

The technology has advanced considerably since 2002 when Toyota began renting Highlander SUV-based fuel cell vehicles to customers in Japan and North America.

A key difference in the new generation of fuel cells is that there is no humidifier; the humidity the fuel cell needs is taken directly from the water produced in the chemical reaction between the hydrogen and oxygen. This means the structure of the fuel cell has been made simpler, more compact, more reliable, lighter and cheaper to produce.

Commercialisation
The Fuel Cell Sedan will go on sale in Japan before April 2015 and preparations are under way for launches in the USA and European markets in the summer.

In Japan the Fuel Cell Sedan will be sold at Toyota and Toyopet dealerships, priced at approximately seven million yen (about £43,450). Initially sales will be limited to those parts of the country where a hydrogen refuelling infrastructure is under development. Prices for Europe and the USA have not yet been decided. Detailed information such as final prices, specifications and sales expectations will also be announced later.

Toyota’s commitment to developing vehicles that are kinder to the environment is based on three principles: embracing diverse energy sources; securing low vehicle emissions; and driving positive environmental change by making these vehicles popular with customers.

Hydrogen has great potential as an alternative fuel. It can be produced from a wide variety of primary energy sources, including solar and wind power; it is easy to store and transport; and when compressed, it has a higher energy density than batteries. It could also be used in a much wider range of applications beyond automotive and domestic use, including large-scale power generation.

Fuel cell vehicles contribute to the diversification of vehicle fuels. They emit no carbon dioxide or substances harmful to the environment when driven, but offer the convenience associated with petrol-powered vehicles. Toyota believes the technology has great potential in the development of vehicles that are kinder to the environment and ideal for helping deliver sustainable mobility.

The HyFive project
The aim of the HyFive (Hydrogen for Innovative Vehicles) project is to speed up the introduction hydrogen-powered cars in Europe. The group is a partnership of 15 vehicle manufacturing and energy providing businesses who are joining forces to help ensure a co-ordinated deployment of fuel cell vehicles, in conjunction with establishment of the refuelling and fuel supply infrastructure they will require.

Toyota, BMW, Daimler, Honda and Hyundai will be responsible for delivering a fleet of 110 vehicles to six European cities: Bolzano, Copenhagen, Innsbruck, London, Munich and Stuttgart. A network of hydrogen refuelling pumps will be developed simultaneously within these five metropolitan areas, as well as in Sweden, Denmark’s close neighbour.

The vehicles deployed by Toyota from the effective launch of the programme at the end of 2015 will be fitted with a continuous data logging system. This will operate throughout the three-year project, providing engineers with detailed, day-to-day feedback on the cars’ use and performance, information that will be essential for further development of the fuel cell technology.