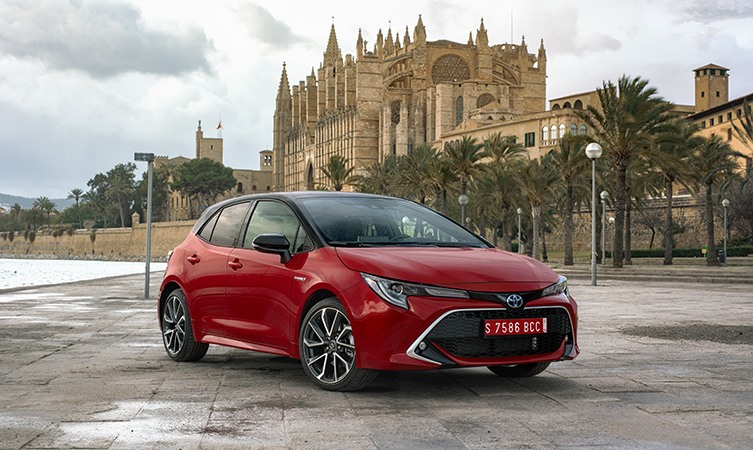 The first Toyota Corolla reviews are in, after British journalists got the chance to drive the car in Mallorca, Spain.

The new Corolla will come in three models: Hatchback, Touring Sports and Saloon, although it is the first of these that this Toyota Corolla review round-up primarily focuses on.

Want to experience the Corolla for yourself? Book a Corolla test drive via the Toyota GB website to see what all the fuss is about.

Auto Express: “The right car at the right time.” 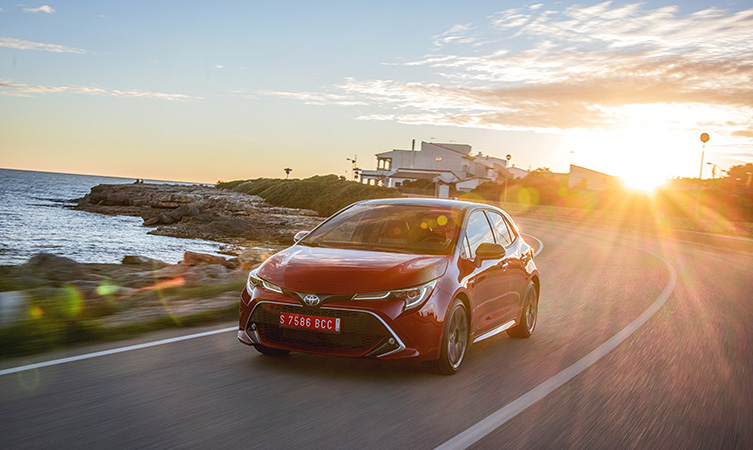 “The new Toyota Corolla looks like the right car at the right time – with hybrid powertrains across much of its range and a British manufacturing base.

“It’s composed in corners and… pretty compliant on all but the worst road surfaces. We’d like a touch more response in the first half-turn lock; but that aside, the steering is pleasingly direct.

“Take a relaxed approach and Toyota’s efforts to cut down the number of rev-soaring ‘rubber-band’ moments pay dividends. In smooth, unhurried driving, there are more moments than ever when the Corolla feels like a regular torque converter automatic.

How much? Get a Toyota Corolla finance quote

“It’s at its best around town, where a patient driving style will allow you to get between plenty of junctions and traffic lights using next to no petrol at all.

“The Corolla is Toyota’s best family hatchback for a long time, with an appealing blend of refinement around town, as well as a comfortable ride, precise handling and solid build quality.  It has relatively few glaring faults compared with the opposition.”

Autocar: “The Corolla is just handsome.” 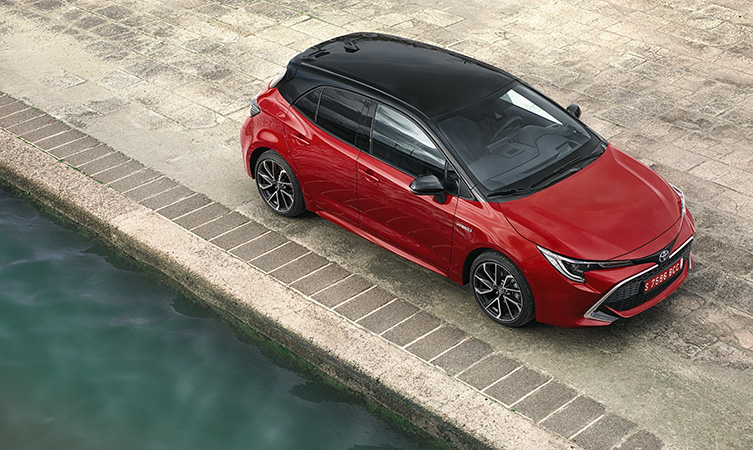 “In the metal, the Corolla is just handsome. The Corolla’s cabin is far from being shown up by more premium rivals. The stitched false leather won’t fool anyone, but it doesn’t feel at all cheap and all the touchpoints are reassuringly plush.

“This new Corolla can be pleasingly mischievous. It sits at the sharp end of the class, as does the chassis. On this evidence the Corolla ought to do well back on the country roads around Burnaston in Derbyshire, where it is built.

“For now, let’s settle on four stars and recognise that the reborn Corolla offers its driver far more than the Auris ever did, and much more besides. And if ever Toyota decides this new hatch needs a halo model, I’m sure the good people at Gazoo Racing… will happily oblige.”

The Telegraph: “A big improvement.” 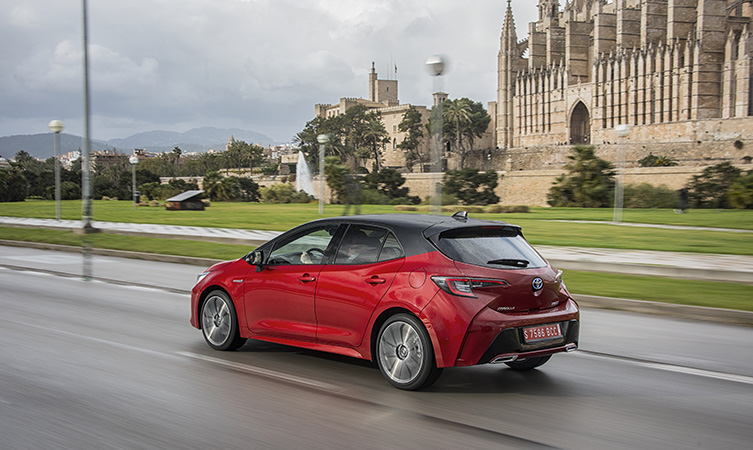 “Among the current bunch of… Toyotas, the new Corolla seems to be a meld of the best and most interesting; this is a good-looking, coherently designed car with an attractive front panel and mean-looking headlamps.

“The interior presents a high-quality facia, with well-located panels covered in pleasant fabrics and an attractive brushed chrome finishing strip.

“The twelfth version of the world’s most popular car name plate is a big improvement.”

Top Gear: “The Corolla looks more striking than ever.” 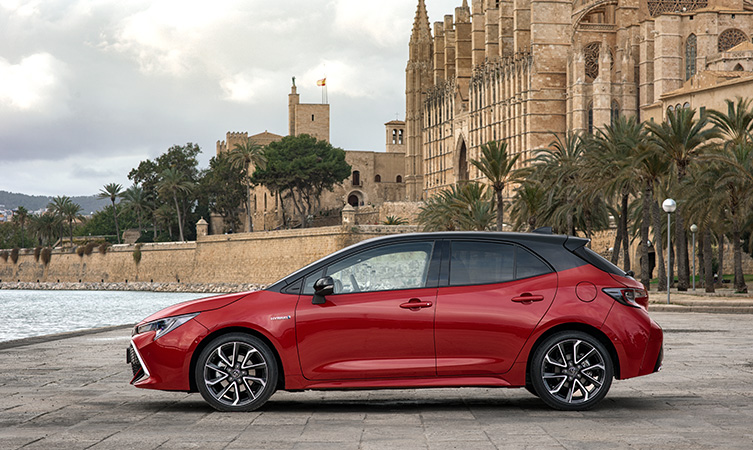 “The Corolla looks more striking than ever, and proves Toyota is really on a roll with making its cars less boring.

“The Corolla easily ranks among the most comfy and relaxing hatchbacks on sale. It’s about as quiet and calming as hatchbacks get. That – and its cost saving for business owners – is the area it stands out from its many, many rivals.”

Parkers: “It doesn’t take long to notice the vast improvement.” 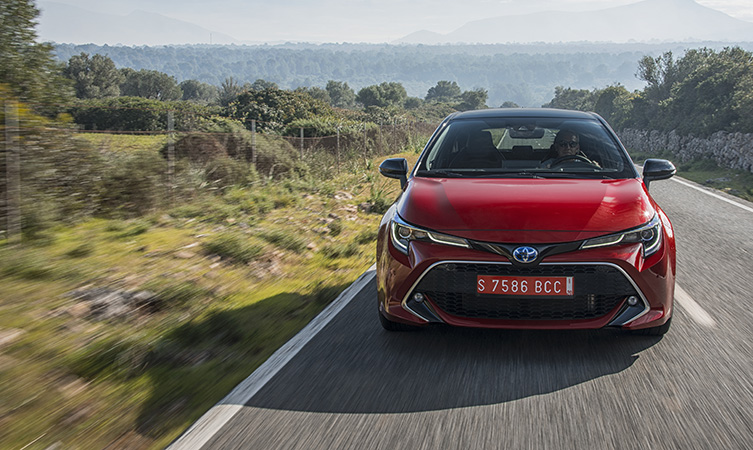 “There are good signs from under the surface that it’s more fun to drive than the Auris – this car is based on the same TNGA underpinnings as the Prius and Toyota C-HR. Even from the outside you can see that the Corolla means business – with its wheels pushed right out into the corners and a squat, purposeful stance.

“Climb inside the Corolla and it doesn’t take long to notice the vast improvement. Not only is the design far cleaner than before, but in its place sits a simple touchscreen and climate control arrangement. It’s also much more modern in terms of the digital dashboard. Everything is softer to touch and more sculpted to look at; this new car feels much plusher.

Ready for the next step? Build your Toyota Corolla

“Once on the move, the Corolla produces a smooth ride that soaks up the worst of our road surfaces, managing to avoid sending thumps into the cabin. When the hybrid software engages electric mode, the absence of engine noise makes it a serene place to spend time in.

“Just like the Auris, this is a car first and a green-conscious hybrid second, as opposed to the more overtly eco Prius. Unlike either of those cars, however, the 2019 Toyota Corolla has been designed with half an eye on driving enjoyment, too.

CarWow: “One of the plushest interiors in class.” 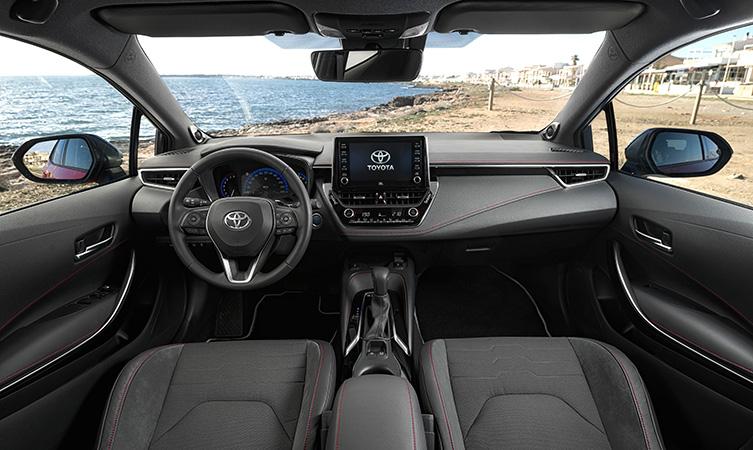 “If you think the Toyota Corolla name is synonymous with boring, this latest model is anything but. Starting with the way it looks, you’d struggle not to notice it going down the street

“This continues inside. The Corolla has one of the plushest interiors in class. Even if you get the most affordable model, the overall design of the cabin is much more interesting than before – it’s now closer to a plush Lexus effort than ever.

“The front seats are very comfortable and if you go for the top spec you get sport seats upholstered in leather that are not only very supportive, but also look cool with their polished metal inserts.

“It manages to be fun to drive, but also comfortable thanks to accurate steering that gives you confidence and the sort of sound deadening that you expect from more expensive cars. It’s worth pointing out that even on standard suspension, the Corolla irons out bumps better than a lot of alternatives, making it a great long-distance car.

“So, you might think that the biggest thing about the new Corolla is the updated looks, but the striking body hides a new interior that’s better than ever and a driving experience that you probably never expected from something that has a Toyota badge.”