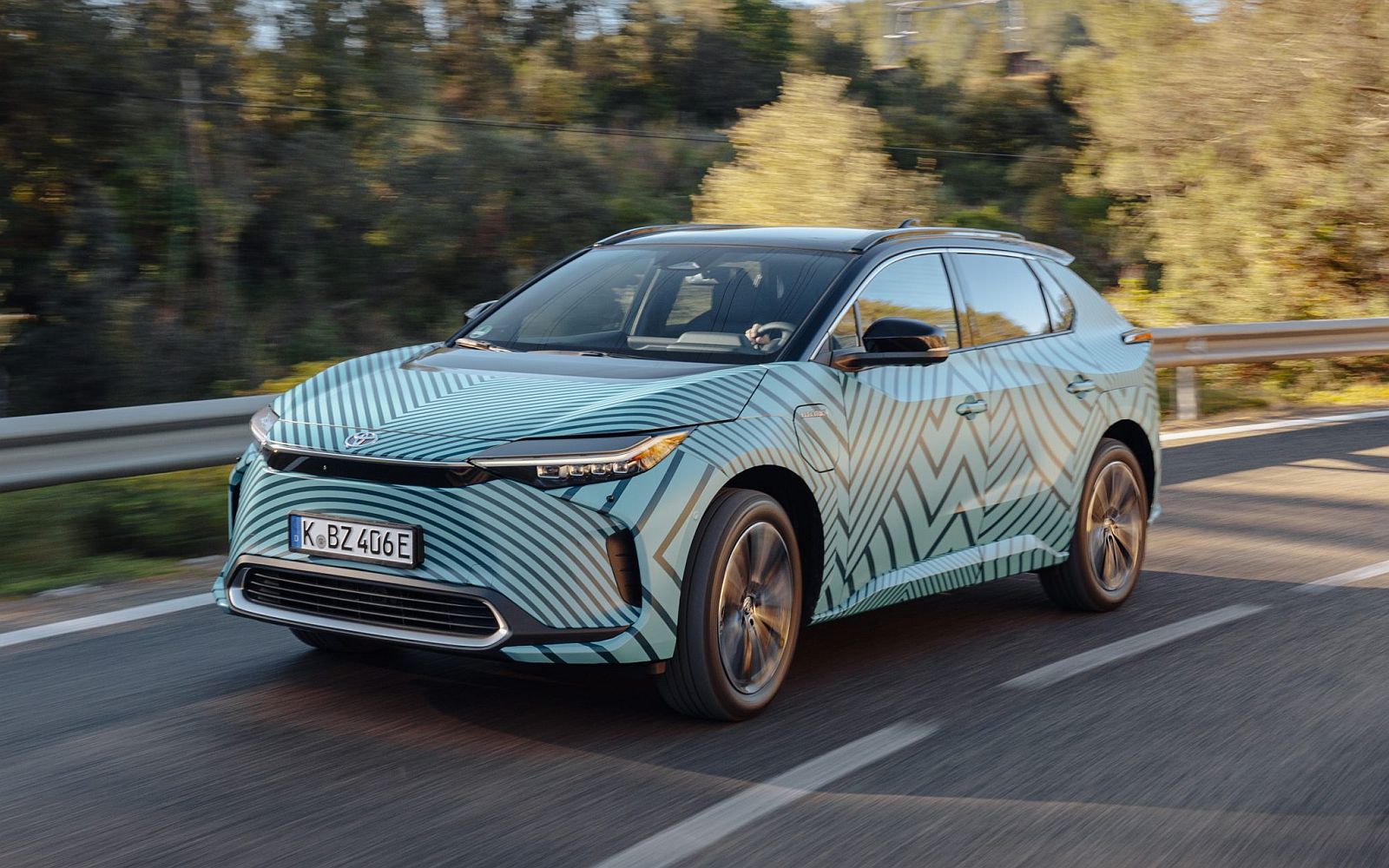 Selected members of the national motoring press were recently invited to test-drive pre-production prototype versions of our highly anticipated new Toyota bZ4X – the first model in our new beyond Zero series of battery electric vehicles. Unusually, the professional testers were able to get to grips with the mid-size SUV across a variety of challenging terrains, from scarred mountain roads to water troughs deep enough to swim in. What were their Toyota bZ4X reviews?

Below is a selection of excerpts from their online reviews. To read the full reports, click on the emboldened links.

“We had the opportunity to sample a pre-production version of the twin-motor range-topper, and while… you won’t find it lacking in punch off the line… [its] easy-going power delivery encourages you to drive the bZ4X in a more relaxed manner. But the bZ4X felt surprisingly at home on the tight and twisty country roads just outside of Barcelona. Body movements, while noticeable, remained well-controlled, while a reassuringly consistent brake pedal gave us the confidence to cover ground at a reasonable pace.

“This might look like the very definition of a soft-roader, but it benefits from a… terrain-control system which allows it to overcome deep snow, mud and other obstacles. We tested these systems, including the… 500mm wading depth, on a challenging off-road course, and the way the 4WD system manages to find grip in the muckiest of situations is truly impressive. Things continue to impress inside the cabin [where] you’re met with exactly what you would expect from a next-generation Toyota.”

“Our early taste of Toyota’s first EV shows it’s a solid electric SUV boasting range claims that should be achievable and a relaxed and refined driving experience. It delivers more than adequate charging capability and practicality, while the new infotainment is a big step on. It bodes well for the brand’s all-electric future bZ models.

“Toyota has always been explicit about actually living up to the numbers it quotes, rather than just offering unachievable headline stats. Plus the platform underneath the car’s squared-off frame is an impressive piece of engineering. On the move the bZ4X… is incredibly smooth, delivering Lexus-like refinement in a mainstream product.”

“We’ve used the all-wheel drive prototypes to traverse impossibly steep hills, navigate sticky ruts and slink through water. The bZ4X is equipped with X Mode – an all-encompassing function which allows for easy ascent and descent. And thanks to our car’s twin 80kW motors, the bZ4X is able to move torque to wherever there’s more grip. Sealed batteries also mean the prototype can partially submerge in water.

“We’re pleased to report the bZ4X has road manners, too. On the roads around Barcelona, we were able to test the dynamics of the first e-TNGA chassis, and the Toyota seems perfectly balanced. The chassis benefits from a modest ground-clearance and low centre-of gravity. It means that the weight… isn’t noticeable when driving normally. The result is a car that… you’re happy to feed into corners at a decent pace.”

“All versions will boast 150kW rapid-charging capability, sufficient for an 80% top-up to be done in around half an hour. That’s slightly ahead of the pack as far as charging speeds go. On the road, it’s not violently fast… but it is extremely smooth and quiet, suggesting Toyota is going after a different sort of buyer with the bZ4X – one who prioritises comfort over sheer driving thrills. Such buyers will be pleased to learn that even on large 20-inch alloy wheels, tackling less-than-perfect Spanish tarmac and even some gravel roads, the bZ4X rode very well, thanks to a sophisticated and evidently very well-engineered suspension and chassis.

“The next-generation infotainment system it showcases has sharper graphics, faster responses, more versatile connectivity and a generally slicker feel than what’s gone before. Safety technology is also impressive. Toyota’s latest package of crash-avoidance systems goes by the name ‘T-Mate’ and… we expect all this will be offered on even the entry-level bZ4X.”

“The Toyota bZ4X is Toyota’s very first pure electric car. And there’s plenty to like from the off. It looks distinctive with matt wheel arches and some defiantly Japanese styling. The many sensors for the advanced driver-assistance systems are hidden behind the slim black panel on the nose, keeping everything neat, and there’s a sense of drama about the whole thing.

“The initial signs are really very good. Toyota has obviously aimed to hit all the right notes without too much drama. The battery comes in one size which Toyota thinks is a bit of a sweet spot, the power is modest but workable, the interior sporting all the right tech without feeling too oppressive. This is Toyota making a car with general appeal, rather than something polarising. The bZ4X… is confident about pretty much everything. And it’s exceptional off-road. It’ll probably never see even 30% of its capability, but it’s comforting to know that it can.”

“Throttle response felt well-calibrated, and… we didn’t find it lacking in punch off the line. It’s only as the speed rises beyond 70mph that the rate of acceleration starts to ease off.  The easy-going power delivery combined with fairly soft suspension makes the bZ4X a relaxing place to while away hours behind the wheel. Body movements remained well-controlled and a reassuringly consistent brake pedal gave us the confidence to cover ground at a reasonable pace.

“Inside you’re met with exactly what you’d expect from a next-generation Toyota. The materials… are plush and well screwed together, while a low scuttle gives an open and airy feel to the interior. Higher spec cars give you a cinematic infotainment experience, with a 12in landscape-oriented screen. In the rear, two tall adults have limo-like amounts of leg room on account of the unusually long wheelbase, while a flat floor will even make a third occupant feel fairly at ease.”

“It’s like a Toyota, only it doesn’t make make a noise. I say that in praise because Toyota excels at making solid, reliable, practical and easy to drive cars. Toyota was keen to point out the bZ4X’s off-roading capabilities on the launch… [so it] will offer customers living in the Yorkshire Dales peace of mind thanks to things like snow and mud driving modes.

“The numbers that matter: More than 280 miles of range in the FWD version, around 255 miles for AWD, 80% top-up in half an hour on a 150kW charger. To make its customers’ switch to electric driving as easy as possible, Toyota is offering three years of free servicing, an installed wall box charger from British Gas and six months free access to the Toyota Public Charging Network, all for £611 a month.”

“There’s decent space, tonnes of credible tech and driver-assistance systems and really very striking styling, with lots of angles and funky plastic wheel arches that add some visual drama. There’s only so far you can go with the basic shape of a mid-sized SUV, but Toyota has done a decent job of making it look at least a little bit different. Of particular note is the fact that all the forward-facing sensors have been inveigled away into the little black plastic moustache at the front; it’s neat and effective.

“Toyota makes a big deal out of the fact that the bZ4X is decent off-road – unlike most of it’s competition. We waded, hill climbed, cross-axled and mud-ran a bZ4X through several carefully-crafted off-road courses. Even with summer ‘eco’ tyres and some ham-fisted driving, the bZ4X showed that it’s got more off-tarmac chops than 75% of its peers. It’s an extremely competent, well-built example of the breed, that looks really quite striking.”

Learn more: Click here to read about the new Toyota bZ4X, its grade structure and how to reserve yours