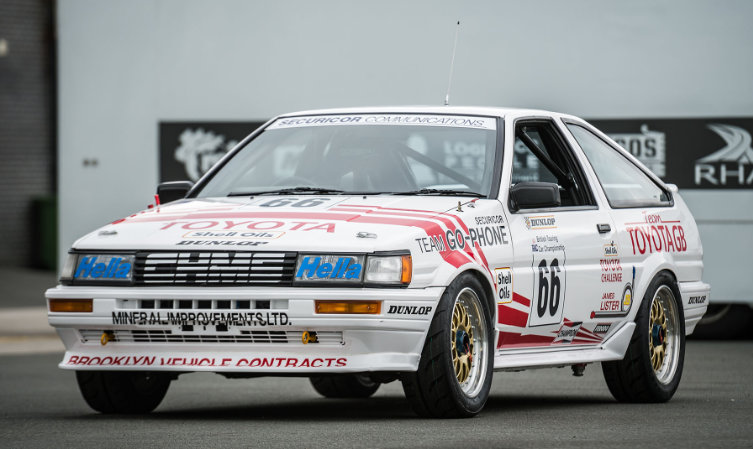 As Toyota celebrates the 30th anniversary of its title win, we took the covers off our replica Chris Hodgetts Motor Sport (CHMS) Corolla GT Coupe for an outing at Anglesey alongside the current BTCC Avensis.

It would have been fantastic to have the actual championship-winning car present but the whereabouts of that original car is unknown; reports suggest that it ended up going overseas, but then the trail runs cold. So to coincide with the launch of the AE86’s spiritual successor – the front-engined, rear-wheel drive GT86 – Toyota GB commissioned this replica.

Alongside the 2017 BTCC contender, the simplicity of the ’80s Corolla GT Coupe is striking. Whereas modern BTCC regulations proscribe an extensive aerodynamic package that includes a frontal aero device with a flat floor and a specific rear wing profile, the Corolla is a far more humble machine. Beneath the Toyota GB livery run by the CHMS team, the body is stock Toyota fare. As specified by the FIA’s Group A regulations in force at the time, the front bumper, side skirts and boot spoiler were all fitted to the production AE86.

A key part of the success enjoyed by Chris Hodgetts was the powerful yet reliable Toyota 4A-GE twin-cam engine. Displacing 1587cc, it came in below the 1600cc limit for BTCC’s class D, and yet this compact four-cylinder engine reportedly developed around 195bhp for the 1987 season. The engine in our replica Corolla GT isn’t quite so highly strung as the original race engines, yet it still generates in the region of 170bhp.

A comparison with current BTCC regulations shows how the series has moved on. While engine capacity is now capped at 2.0 litres, the addition of turbo power and modern advances like direct-injection mean that the the current crop of BTCC cars like the Speedworks Toyota Avensis produce over 350bhp, double the power of our Corolla.

Equally important to the Corolla GT Coupe’s on-track performance was its superb handling. Stripped of unnecessary extras, it tipped the scales at only 800kgs, and its production-derived front-engined, rear-wheel drive layout improved matters further by evenly distributing that weight across the axles. Thirty years on, the BTCC still mandates that cars use the same drivetrain layout as the base production model, so in contrast to the Corolla, the current BTCC Avensis employs a front-engined, front-wheel drive layout.

With a fantastic car beneath him throughout 1986 and 1987, Chris Hodgetts capitalised on his wealth of experience to dominate the class throughout both seasons. Even now, the prospect of a powerful, lightweight sports car remains a winning formula.

And for the latest developments from the BTCC, stay up-to-date here on the Toyota blog.