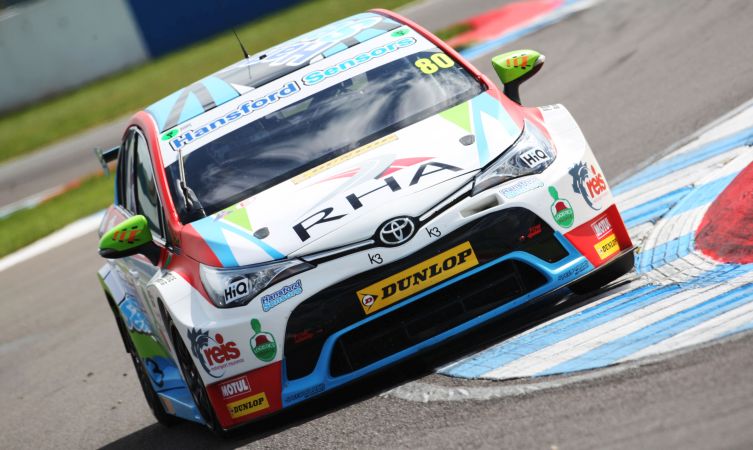 Last weekend the 2017 Dunlop MSA British Touring Car Championship saw the Toyota Avensis racers set two authoritative podium positions in the three-race schedule at Donington Park. Combined with earlier success at Brands Hatch, it provides additional confirmation that the pre-season pace displayed by the Avensis at Donington was not a one-off.

This performance has ushered Speedworks Motorsport driver Tom Ingram to the top of the championship leaderboard and bolstered Rob Austin’s credentials as one of the top drivers within the independents championship. 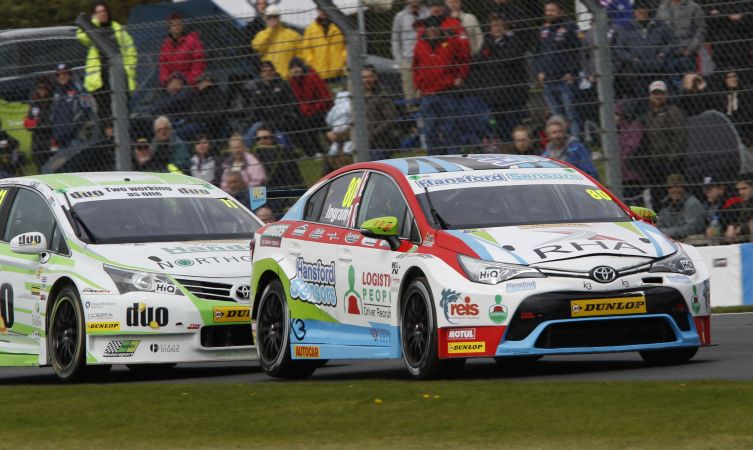 Read on to understand how the weekend unfolded.

As a hot lap specialist, Ingram set the pace in Free Practice and held on to the lead for most of the first 40-minute session. But towards the end his advantage was undermined, dropping to fourth place as Austin leapfrogged into the lead on part-worn tyres and the team’s default chassis setup. The tables were turned in the second session, however. Austin initially looked set to repeat his winning pace until further last-minute hot laps relegated him to fifth, while Ingram improved his position with a third-place finish.

Moving into the vital Qualifying round, both Avensis drivers repeated their practice pace, Austin clocking an impressive 1m 09.514s lap time and Ingram crossing the line less than two-tenths behind. 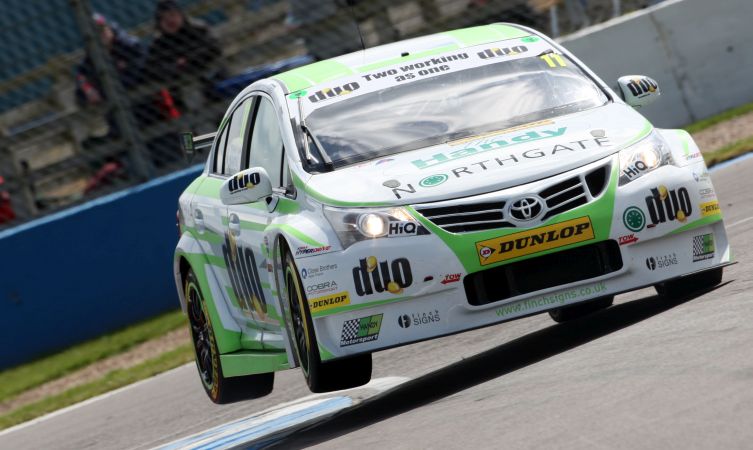 Topping the times, however, was a sensational lap set by Ashley Sutton; so sensational, in fact, that it called into question the car’s legality. Further scrutineering revealed that the team had contravened technical regulations and were relegated to last on the grid. This revelation promoted Austin and the Handy Motorsport team into their first-ever pole position, with Ingram immediately behind in third.

Despite sitting on the second row of the grid, Ingram made a fantastic start, moving forcefully past Austin’s pole-sitting Avensis on the run down to Redgate, the slowest corner of the circuit. By the second lap, Austin was pushed back into third following Aiden Moffat’s daring slice through the Old Hairpin. 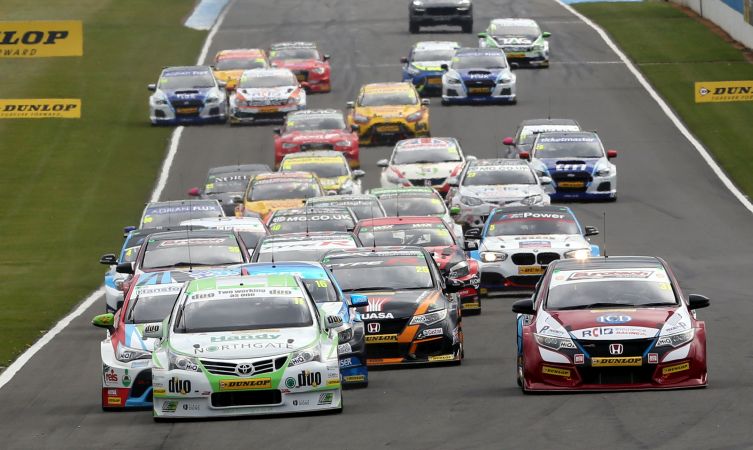 Into lap five and Moffat was hot on Ingram’s heels. Laden with success ballast and running the harder control tyre option (one of only two drivers running this compound), there was little Ingram could do to fend off the young Scot’s greater acceleration and cornering power. So as the cars ran through the tricky Craner Curves left-hander it was the young Moffat that came out ahead.

Austin was now immediately behind Ingram, and similarly capitalised on his ballast-free pace and prime tyre choice. Revenge on the sister Toyota was wreaked at Coppice on lap six, where Ingram was shuffled further down the pack, leaving Austin clear to set the fastest time of the race on lap eight. 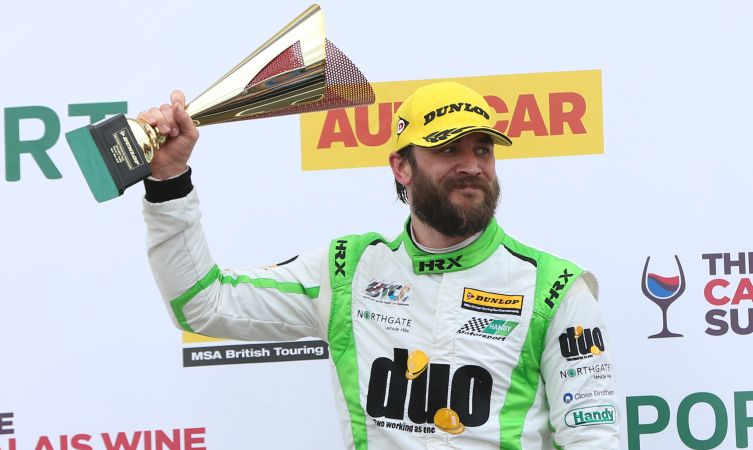 However, following an eye-widening pass by Matt Neal on lap 11, Austin was shuffled back into third place, a position he held on to for the rest of the race. This result secured Handy Motorsport its maiden podium finish this season. Meanwhile, Ingram held determinedly to fifth ahead of a hard-charging Rob Collard.

Austin’s second race did not go as well. Despite starting third on the grid and making an early jump into second, the Handy driver became the jam in a BMW sandwich. He was eventually pushed wide at the Old Hairpin and dropped to tenth place before sustaining further damage that eventually sent him into the gravel and out of the race on lap four. 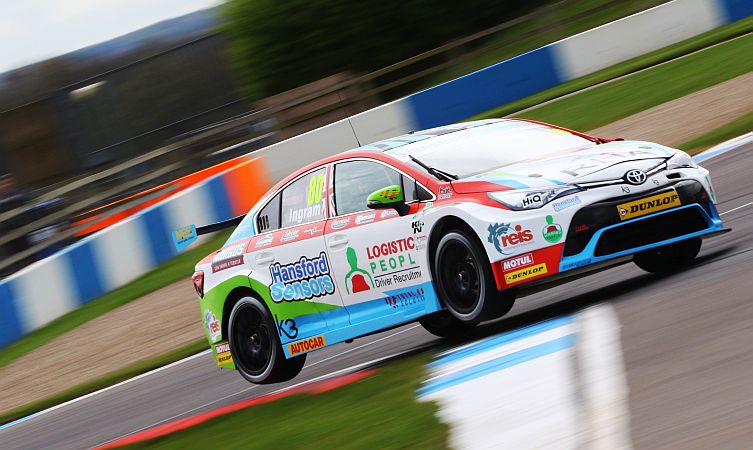 Meanwhile, Ingram capitalised on the aftermath and his reduced success ballast to leap into second and begin chasing for the lead. Come the fourth lap, the Speedworks driver was within sniffing distance of Moffat, who had initially secured a significant advantage by staying clear of the mid-pack skirmishes.

Ingram made his move heading down through the Craner Curves – replicating the stunt Moffat had pulled on him in the previous round – and went on to reinforce his command by pulling out a four-second lead by the chequered flag. In doing so, Ingram became the first double winner of the 2017 season. 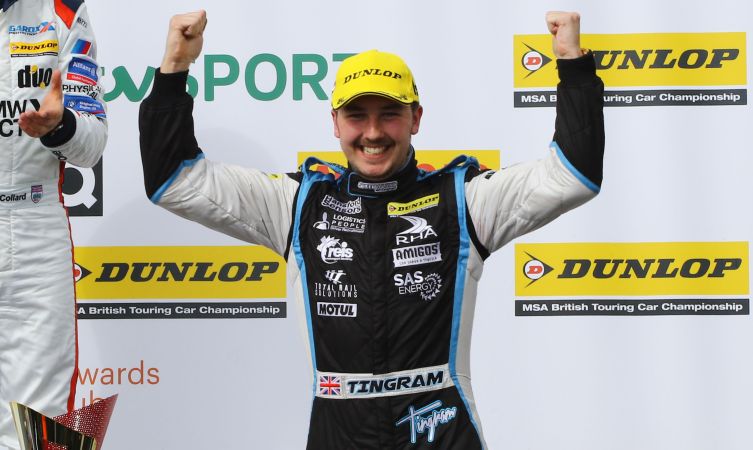 “I’m lost for words!” beamed Ingram, after returning to the pits. “I knew we would stand a fighting chance but I honestly didn’t expect to win like that, from where we were on the grid and a little bit of weight on board. We expected it to be tough to match the pace of the BMWs, but boy, aren’t Speedworks doing a great job at the moment!”

Grey skies finally released rain ahead of round six, making this the first wet race of the season. Grip levels were massively reduced and many cars – Ingram’s Avensis included – aquaplaned off the track, prompting a re-start once the rain had finally abated. 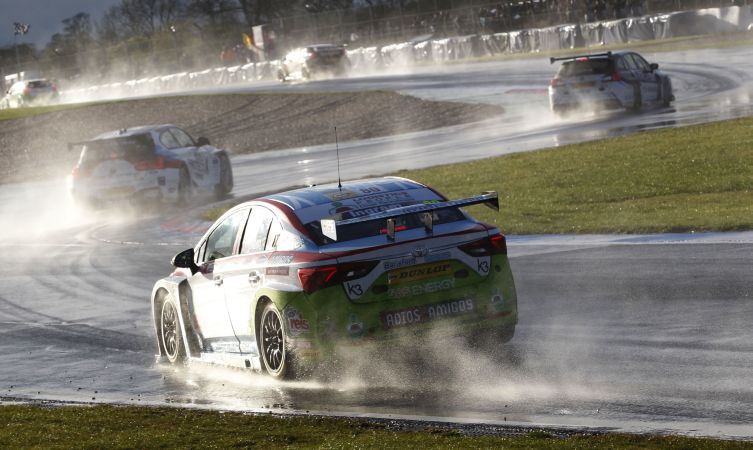 Weighed down again with maximum ballast following his round five win, Ingram skilfully mastered the low-setting sun and blinding spray to forge ahead from eighth on the grid to a top five finish, barely a second adrift of another podium place. Meanwhile, Austin made impressive progress from 25 place at the re-start to 14 position at the flag. This improved to 13 place after the exclusion of Gordon Sheddon from the race for a ride height infringement.

Fantastic results for Speedworks Motorsport at Donington Park mean the team now leads the championship, while Ingram and the Speedworks squad also top both independents tables. 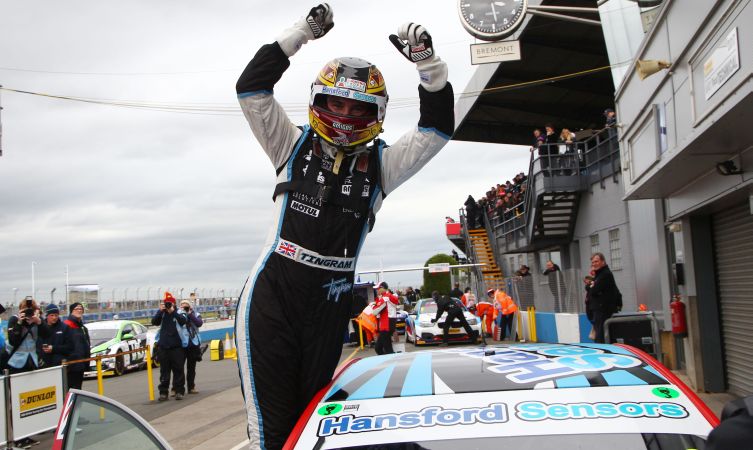 Ingram commented: “Never in my wildest dreams did I expect to leave Donington in the outright lead of the championship – and to do so with a 14-point margin is just crazy! We didn’t really know what to expect going into it carrying 66kg of success ballast, but what we did know was that we had a very quick car underneath us. We far exceeded our aspirations.”

The 2017 Dunlop MSA British Touring Car Championship continues on the weekend of 6-7 May when it touches down at Thruxton circuit for rounds seven through nine.